Loading stuff onto the roof of a car isn't easy. An SUV makes it even harder and if you're on the short side of the human spectrum, then good luck, buddy. Using a roof carrier is still the easiest way to enhance your car's cargo capacity, and I did just that back in May when reviewing the Yakima Grand Tour 18 on my BMW X5. It did the job well, but the inherent issues with roof-mounted carriers, boxes and racks were obvious.

Enter the Yakima Exo system, the Oregon-based company's new customizable cargo solution that plugs into a standard 2-inch trailer hitch. It all starts with the Exo SwingBase. It's akin to a roof rack's crossbars as you need it for everything else to work. It connects to the hitch and performs three key duties. First, its two swing-out arms allow you to mount any of the various Exo racks and boxes to them. Second, it lets you mount the Exo TopShelf to it, which allows for the system's innovative two-tiered setup. And third, it lets you swing everything mounted out of the way so you can still access your vehicle's cargo area. Plus, when the racks or carriers are removed, it stays out of the way completely – there's little reason to remove it apart from aesthetics or beeping parking sensors.

There are multiple advantages to this concept. First, things mounted to a hitch are indeed much easier to access than those on a roof.  Second, a hitch-based system can hold more weight, at 300 pounds, than a roof-mounted rack can, and is more easily swapped between vehicles. If it has a 2-inch hitch, it'll work. Third and fourth, there's the matter of aerodynamics and wind noise, as relocating carriers and racks from the roof to behind the car is beneficial for both. 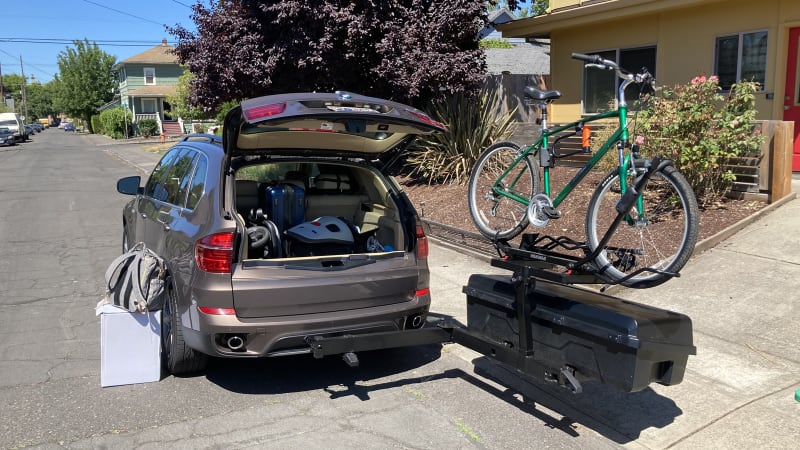 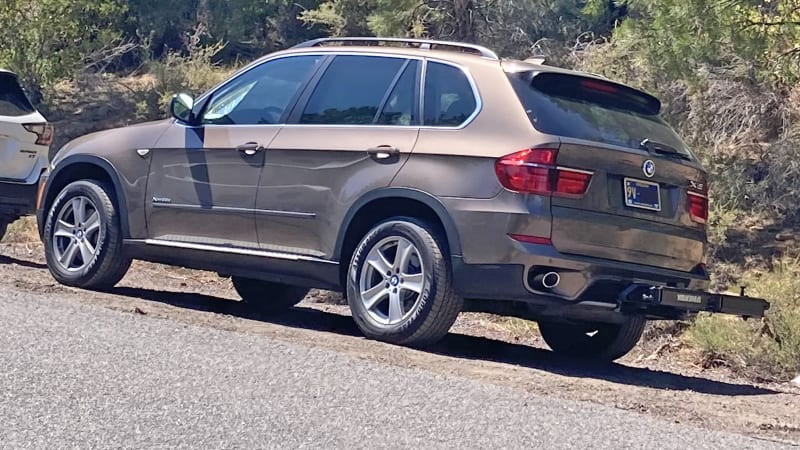 I got a chance to test the Exo, once again putting my X5 to use as Autoblog's official outdoor adventure equipment guinea pig. Although I got a chance to install all the available Exo accessories while stopping by Yakima HQ (more on those later), the custom combination I would live with for two months would be the 10-cubic-foot GearLocker box mounted to the Swingbase and the DoubleUp two-bike rack mounted to the also-selected TopShelf.

Installing it requires more muscle than roof racks do. This is hefty metal equipment, so some care must be taken (just ask my shin and the tiny dent in the X5's tailgate), but once you know what you're doing, it's a much quicker install than roof racks. There's no need to make sure everything's symmetrical and correctly spaced, and there's only one thing to sufficiently tighten (with a big ol' manly wrench) rather than the four rack towers with two screws each. Additionally, it's more easily a one-person job – best of luck putting a roof carrier on by yourself.

Once the Swingbase is on, the Exo could not be easier to use. Just pop the pins to swing out each arm, which lock into place automatically. Then just glide the GearLocker onto the arms, turn the knobs to grip it in place, then lock them with the included key that can work for all Exo pieces. This is the same process for putting any of the attachments on the Exo arms, including when I put the DoubleUp bike rack on the TopShelf. 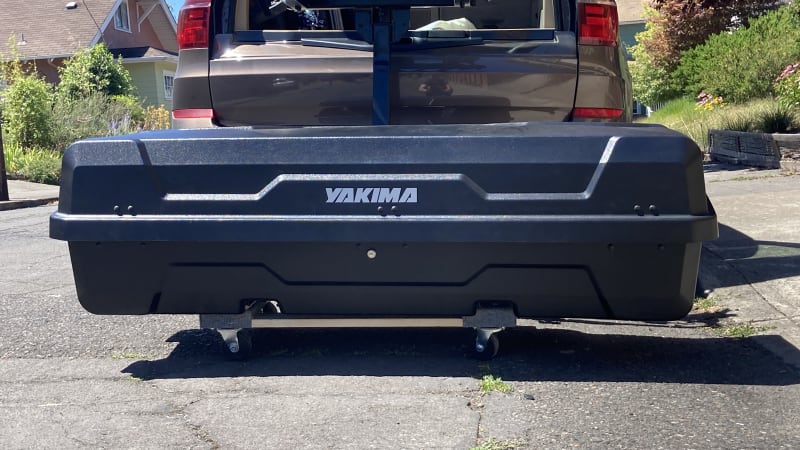 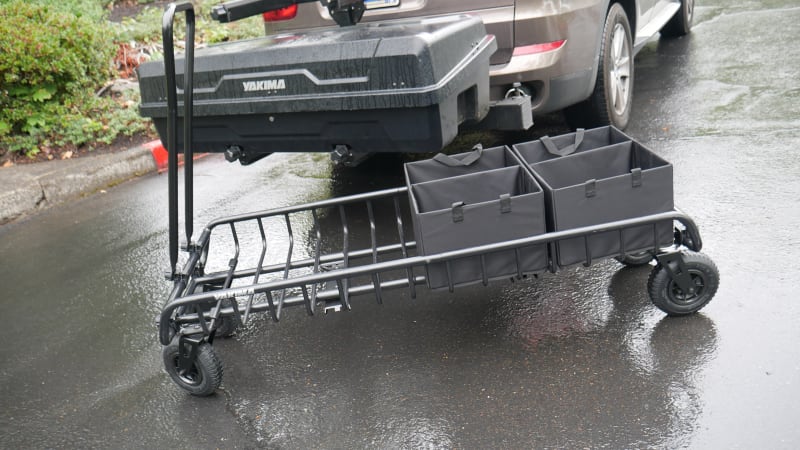 The other advantage to this system is that you can load the GearLocker inside the garage and place onto the Swingbase when it's full. That ain't happening with a roof-mounted box. When unloading, I just pulled the box onto a dolly from my garage (pictured above left), and wheeled the thing up the driveway to be unpacked later.

It's also worth noting that the GearWarrior open box attachment can be fitted with four WarriorWheels, which reduce the need for the separate dolly (pictured above right). Yakima does recommend removing them once on the Exo, but mounting the box does make that process easy enough as the wheels are floating free.

In terms of capacity, below is what I was able to fit inside the 10-cubic-foot GearLocker. Two duffle bags, a Guava portable crib and a whole bunch of shoes, games, toys and other loose stuff. Putting my usual allotment of Luggage Test suitcases cross-ways was not possible with the GearLocker, unlike the wider Yakima CBX and Grand Tour cargo boxes I previously tested. Some of those bags still could've fit inside, and the real-world capacity actually isn't all that different despite the cargo boxes having 16- or 18-cubic-foot capacities – a box is a more efficient space than an aerodynamic lozenge. 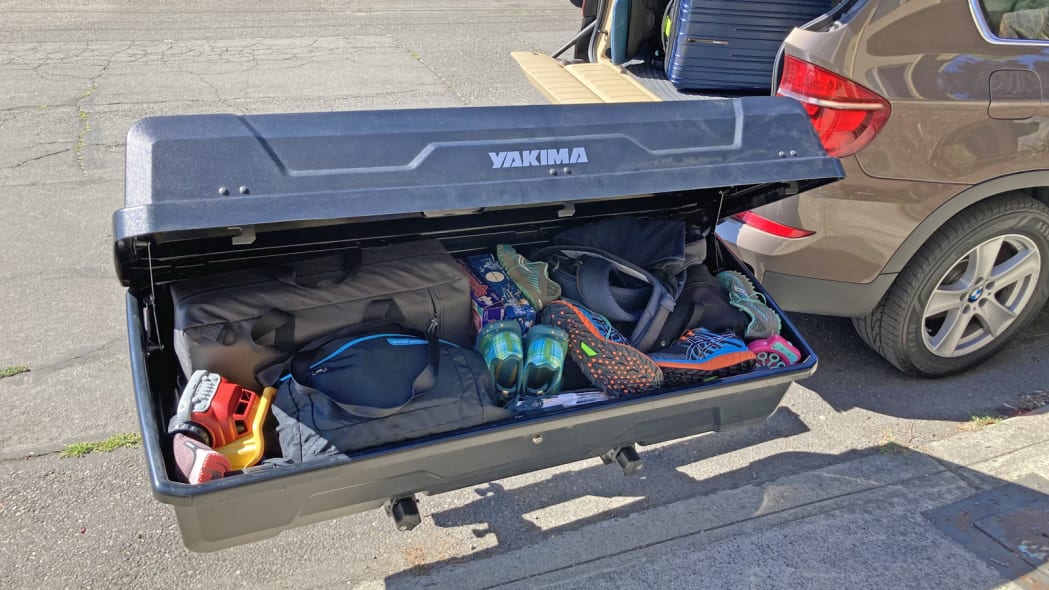 Besides making it easier to physically lift off and on, there was another, more important reason I selected the lightest bags and various loose items to stuff inside. While the Exo is rated at 300 pounds, I kept the heaviest items inside the cargo area and therefore over the X5's axle. Basically, it's a matter of physics: the less weight you have dangling off the back of your car the better. My decision was affirmed during the Hyundai Santa Cruz launch when vehicle development engineer Chahe Apelian warned upon seeing the above pictures, "that thing is going to change the way the car behaves." It's basically for the same reason that rear-engined cars, with their heavy engines hanging out beyond the rear axle, can be a tail-happy handful to drive.

Now, the effects will definitely be different based on the vehicle in question. The 2013 BMW X5 is so heavy and so resolutely planted (I barely noticed the Grand Tour when it was up on the roof), that it's less likely to be effected. I could still subtly detect a difference in the car's balance on a winding highway, though, and something lighter, for instance a compact SUV, would require even more care on such a road. That goes double when facing rainy or icy conditions.

Besides that and the whistling from my extra-large Raleigh bicycle mounted to the DoubleUp, the Exo was basically undetectable from inside. You don't get the booming wind noise of a roof carrier, nor is it as susceptible to accentuating crosswinds. You're also bound to get much better fuel economy as it's mounted behind the car rather than on top of it.

We took the Exo-equipped X5 on a long-weekend road trip from Portland, Ore. to Bend, and once there, I offloaded the TopShelf and GearLocker, leaving the Swingbase in place. Doing so took a matter of minutes with the included proprietary tool, and couldn't have been easier. I would later drop the DoubleUp onto the Swingbase for a morning ride near the Newberry National Volcanic Monument. This setup is pictured below. Again, this was much quicker to affix than other bike-carrying solutions such as roof-mounted racks, hitch-mounted racks that don't swing away, and the hatch-mounted Yakima FullBack I own and would never use again if I had an Exo. 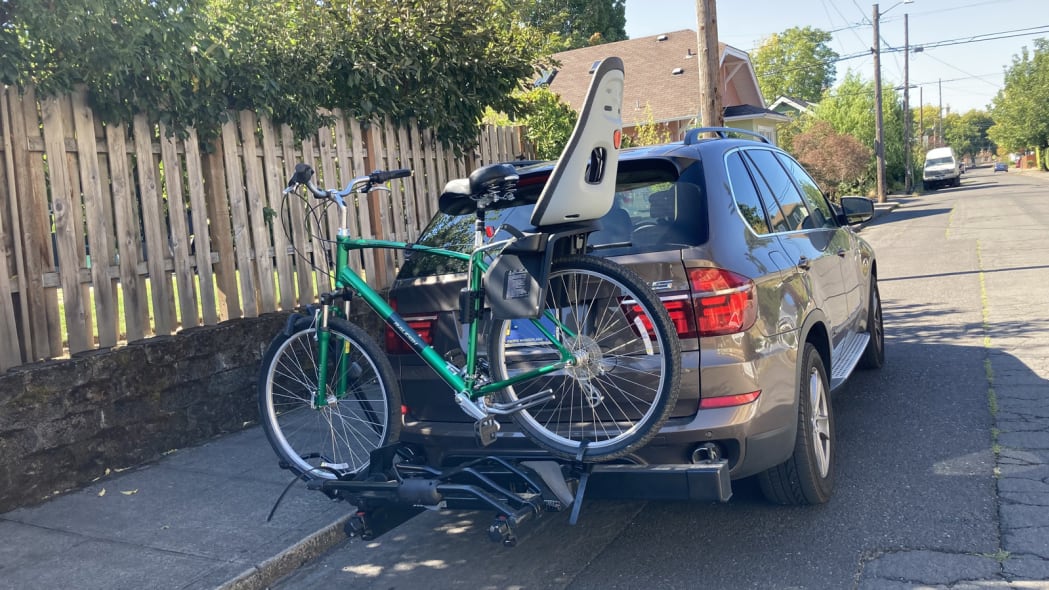 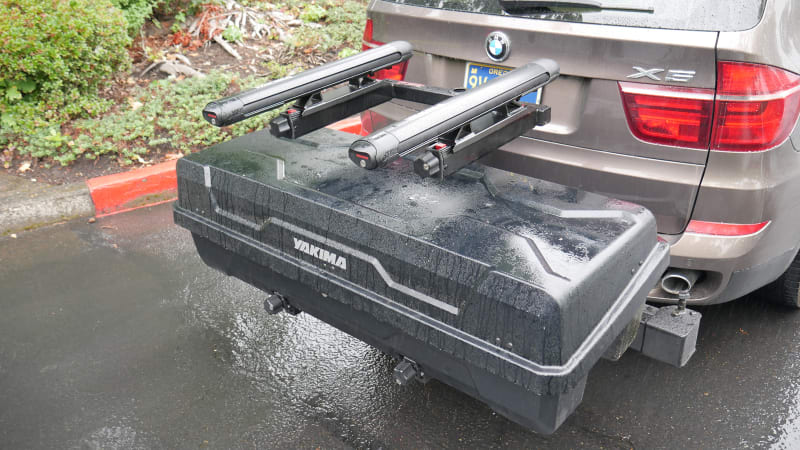 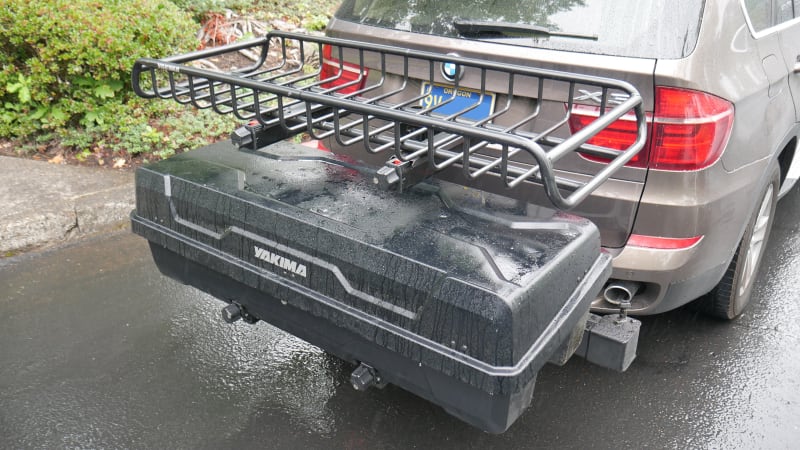 Now, as for the other custom combinations …

Besides the GearLocker and DoubleUp, one of the most likely attachments is the Snowbank mounts that can hold five sets of skis or four snowboards (pictured above left). Of course, you could mount a second Snowbank pair to the TopShelf and double your ski/snowboard count – something that Yakima fitment technician Taylor Thompson says various van-using ski companies have welcomed in place of loading skis/snowboards onto a roof.

He also notes that the more popular combination for skiers and snowboarders is the reverse of my bike-fitted setup: they put the Snowbank on the bottom and then the GearLocker on top. This is because you can't open the bottom-mounted GearLocker when the TopShelf is in place. My combination, which is the only one possible (duh) with an entire bicycle mounted to the thing, requires first swinging out the Swingbase and rotating the TopShelf bracket 180 degrees after popping a pin and removing a knob. You'd also have to do this should you mount two GearLockers to the Exo.

Other options include the GearWarrior open box (pictured above right), which obviously wouldn't be as susceptible to the above opening issue as the GearLocker. 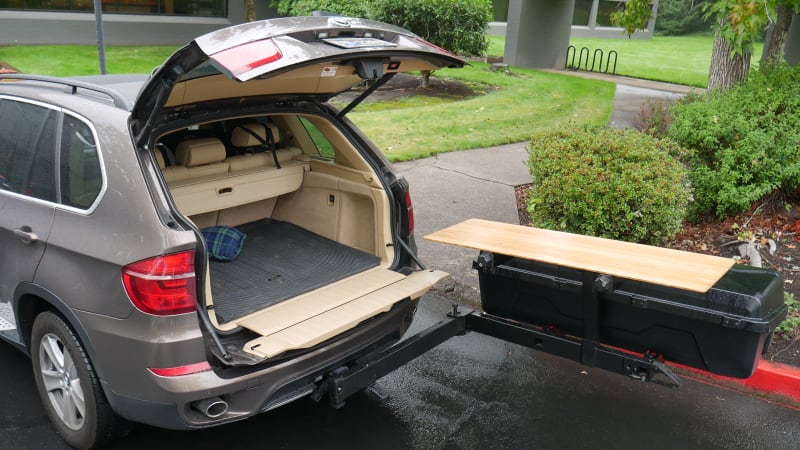 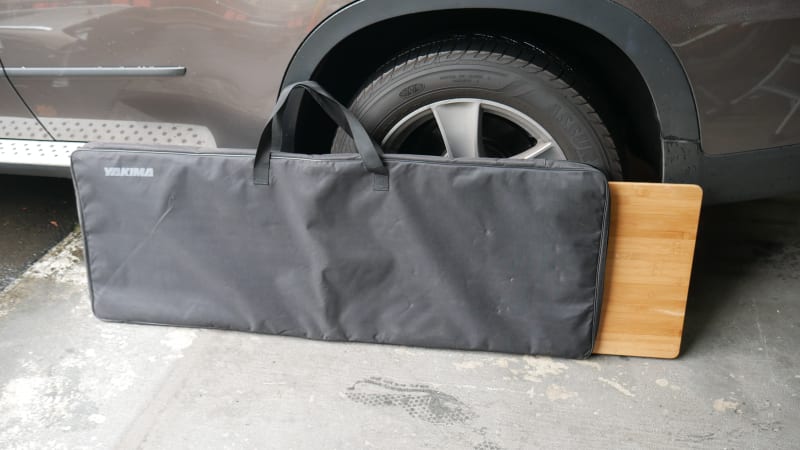 There's also the BackDeck, a bamboo table that snaps onto the TopShelf, creating a workstation, campsite kitchen, etc. The TopShelf's 180-degree swivel is the key to this. It comes with a storage bag to prevent it from being scratched, and it does fit in the GearLocker.

I was also given a sneak peek at two future pieces that are coming to the Exo line in the future: mounts for Yakima's existing RoadShower 4- or 7-gallon mobile water tanks, and a mobile camp kitchen that when closed up looks like a gigantic cooler. That's a little further from completion, but the ability for Yakima to place the Exo cleats onto new and different items shows that there are further possibilities for this innovative system.

As for the cost, Exo is indeed more expensive than various rack and carrier combos. The Swingbase goes for $499 and the TopShelf adds $379. The GearLocker is $399, which is much less than a roof carrier – you could actually buy two for the price of Yakima's CBX. The DoubleUp bike rack goes for $479, which is pricier than other hitch-mounted racks. The Snowbanks are only $30 more than the virtually identical units that mount to the roof. Another possible add is the LitKit, which adds auxiliary lights and license plate holder for $149.

Add it all up and my particular combo was $1,756. By contrast, adding Yakima's Timberline Towers and JetStream crossbars ($464 total), the Grand Tour 18 roof carrier ($749) I used in May and a hatchback-mounted FullBack two-bike rack ($259) would cost $1,472. Going for a smaller or cheaper roof carrier could lower that cost, as could having factory-equipped crossbars. Oppositely, a hitch-based bike rack can be twice as much as a hatch-mounted one.

In other words, the price may not be that different, and the benefits are well worth the premium. Of course, you need to have a 2-inch hitch to make it work. If you do, it's definitely the way to go.