Which Subaru for you? Comparing the 2020 Subaru Outback and Forester

The Subaru Forester and Outback have served similar purposes for years now — hauling families and their gear somewhat off the beaten path to indulge in their favorite outdoor activities — but each goes about it a little differently. Broadly speaking, one is more of a wagon (Outback) and the other an SUV (Forester), but it's certainly more than that. They're also pretty similar in plenty of ways, too. So, while comparisons between cars of different brands are more commonplace, we know there are plenty of shoppers who are in fact comparing this pair of Subaru crossovers. This one's for them.

Subaru updated its Forester crossover for the 2019 model year, and the Outback was renewed a year later for 2020. They don’t look a lot different than their previous generations, but both are far superior to their predecessors in a number of ways. Both the Forester and Outback benefit from the same new Subaru global platform, which has meant a big step up in ride refinement, noise and handling, and there have been improvements in technology and materials as well.

We’ve put many miles on both vehicles, and have opined about them in digital ink and podcast formats multiple times. We’ve gotten to know our 2019 Forester long-term loaner quite well (there were only minor feature availability changes for 2020), and we had the opportunity to compare it to the 2020 Outback when we had them both in our fleet at the same time. 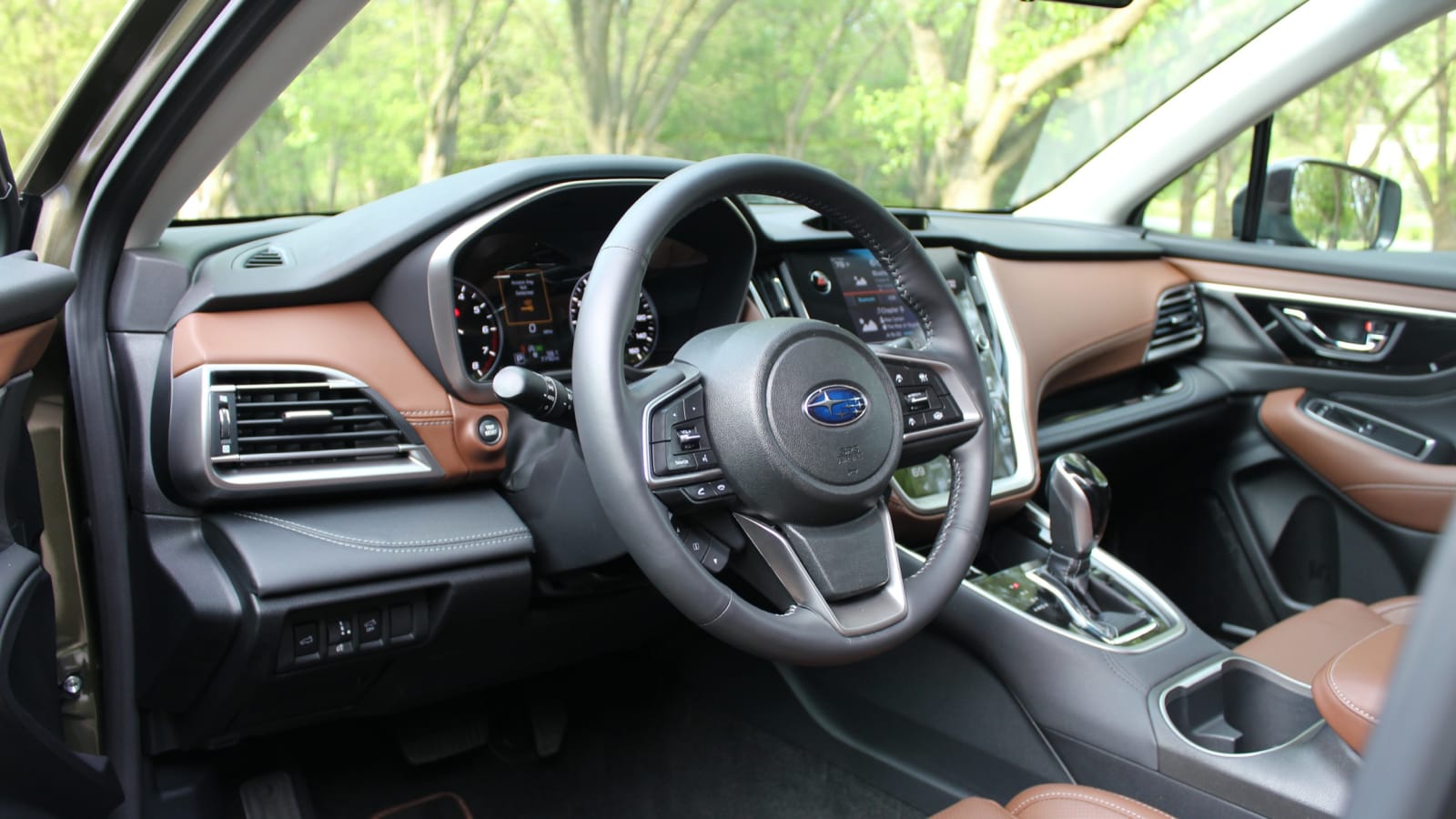 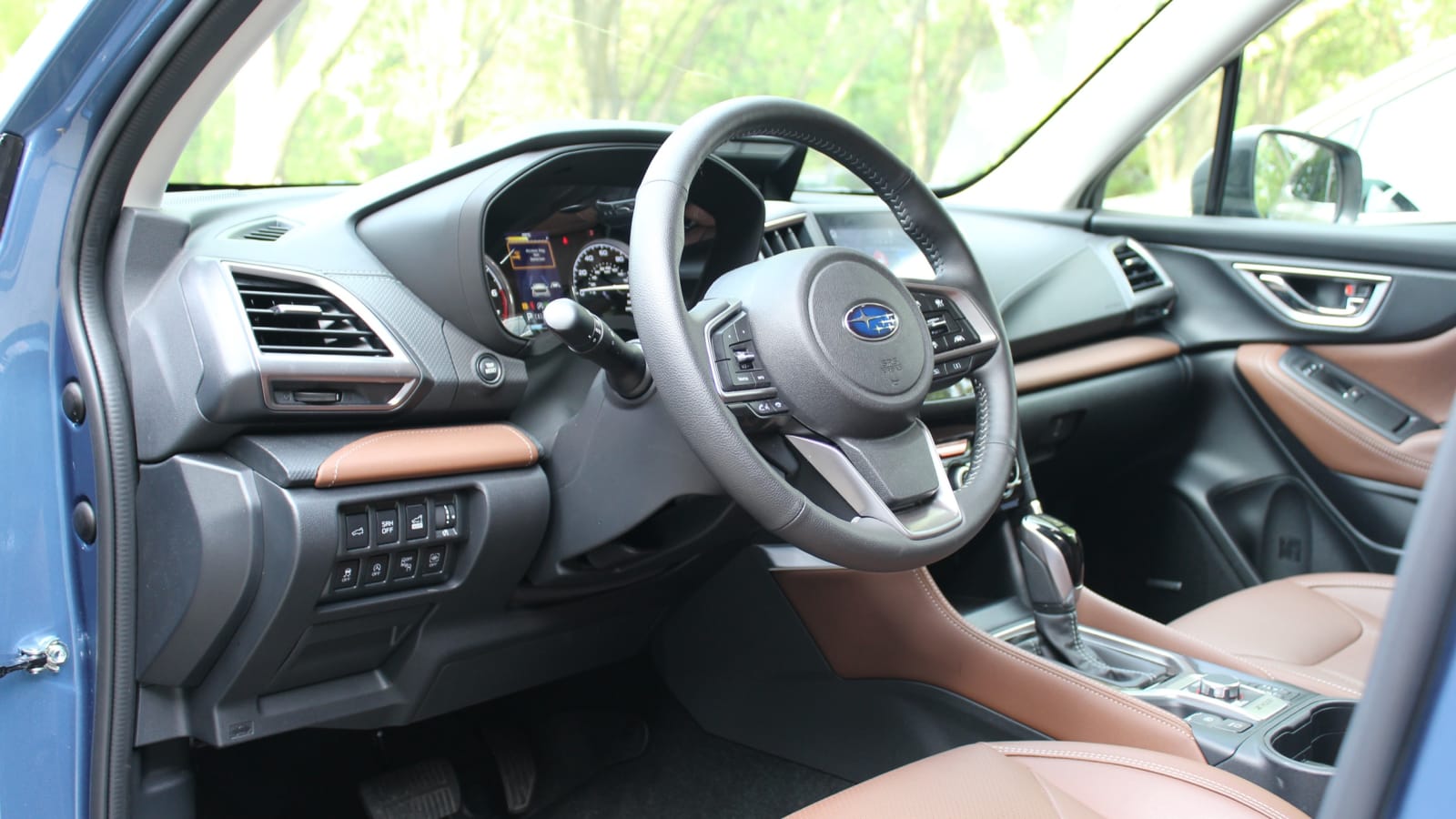 The Forester has only one powertrain option: a naturally aspirated 2.5-liter flat-four engine connected to a continuously variable transmission (CVT). It produces 182 horsepower and 176 pound-feet of torque, which feels adequate for the Forester, but there are still some times when we wish the Forester offered a turbocharged engine as it did in the past for better passing power. It returns 26 mpg in the city, 33 mpg on the highway and 29 combined.

The Outback comes standard with the same 2.5-liter engine, even down to its output and fuel economy. However, in the slightly larger and heavier Outback, this powertrain feels more sluggish — especially after you try the other available Outback powertrain.

The XT versions of the Outback use a turbocharged flat-four displacing 2.4 liters, good for a much meatier 260 hp and 277 lb-ft of torque. The tradeoff is a fuel economy sacrifice of 3 mpg, which is not a lot, considering what you get in return. In the course of a year, the EPA estimates you'd only spend an extra $100 in gas.

The Forester is rated to tow up to 1,500 pounds. The Outback with the same engine can tow up to 2,700 pounds. Equipped with the 2.5T in the XT models, that tow rating increases to more than double that of the Forester, at 3,500 pounds. Just food for thought if you’ve got toys or a small camper to haul around. 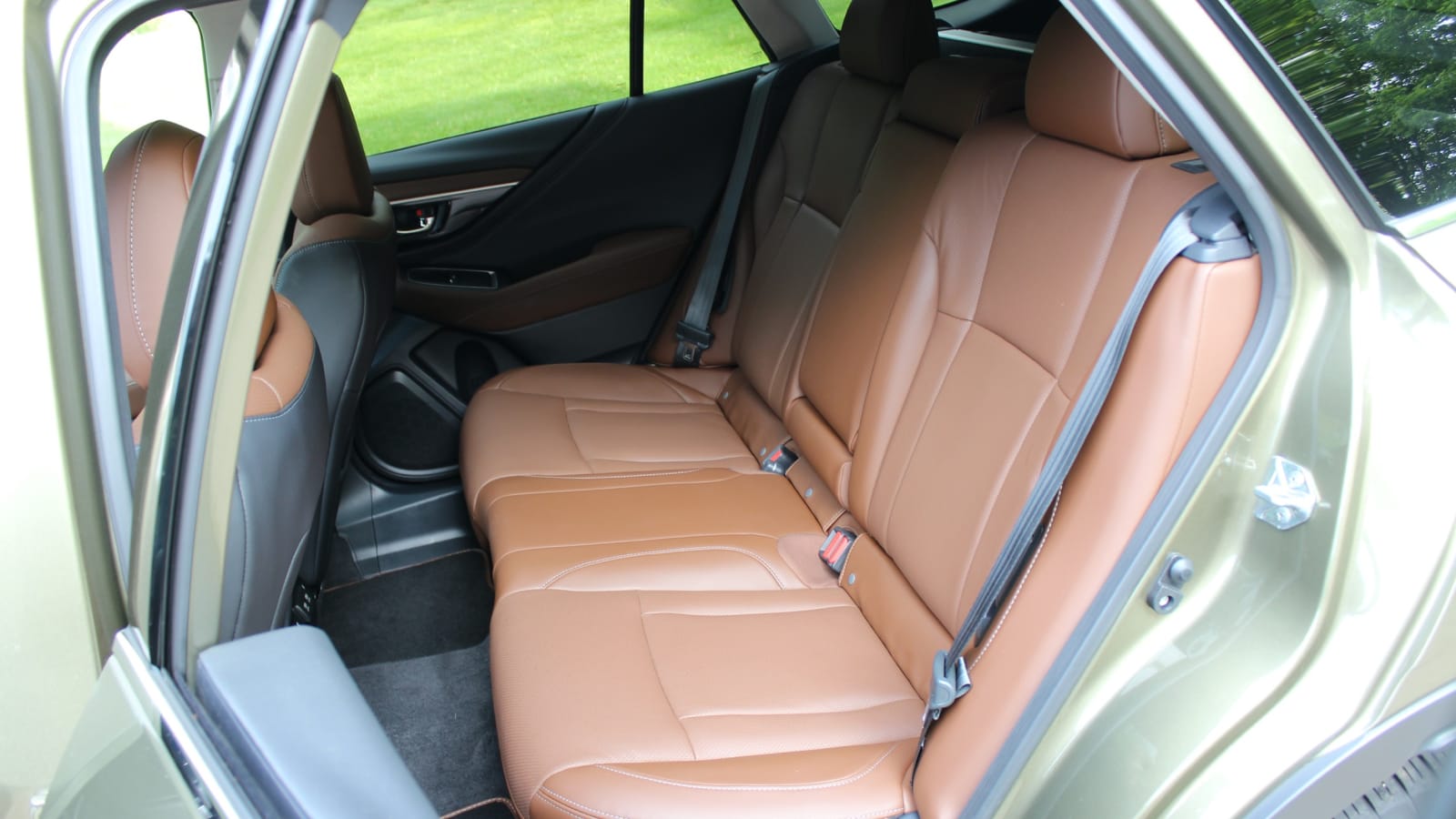 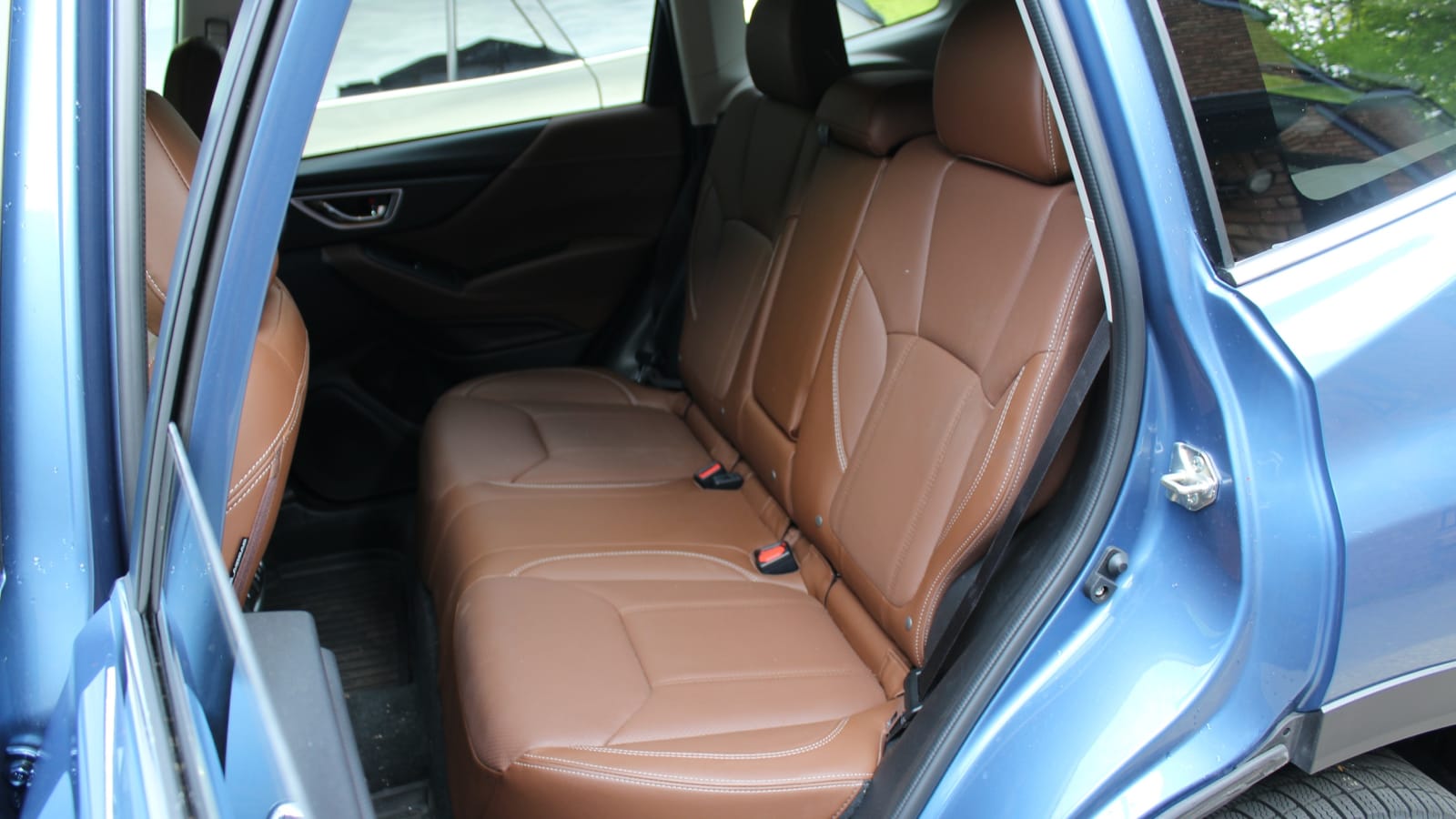 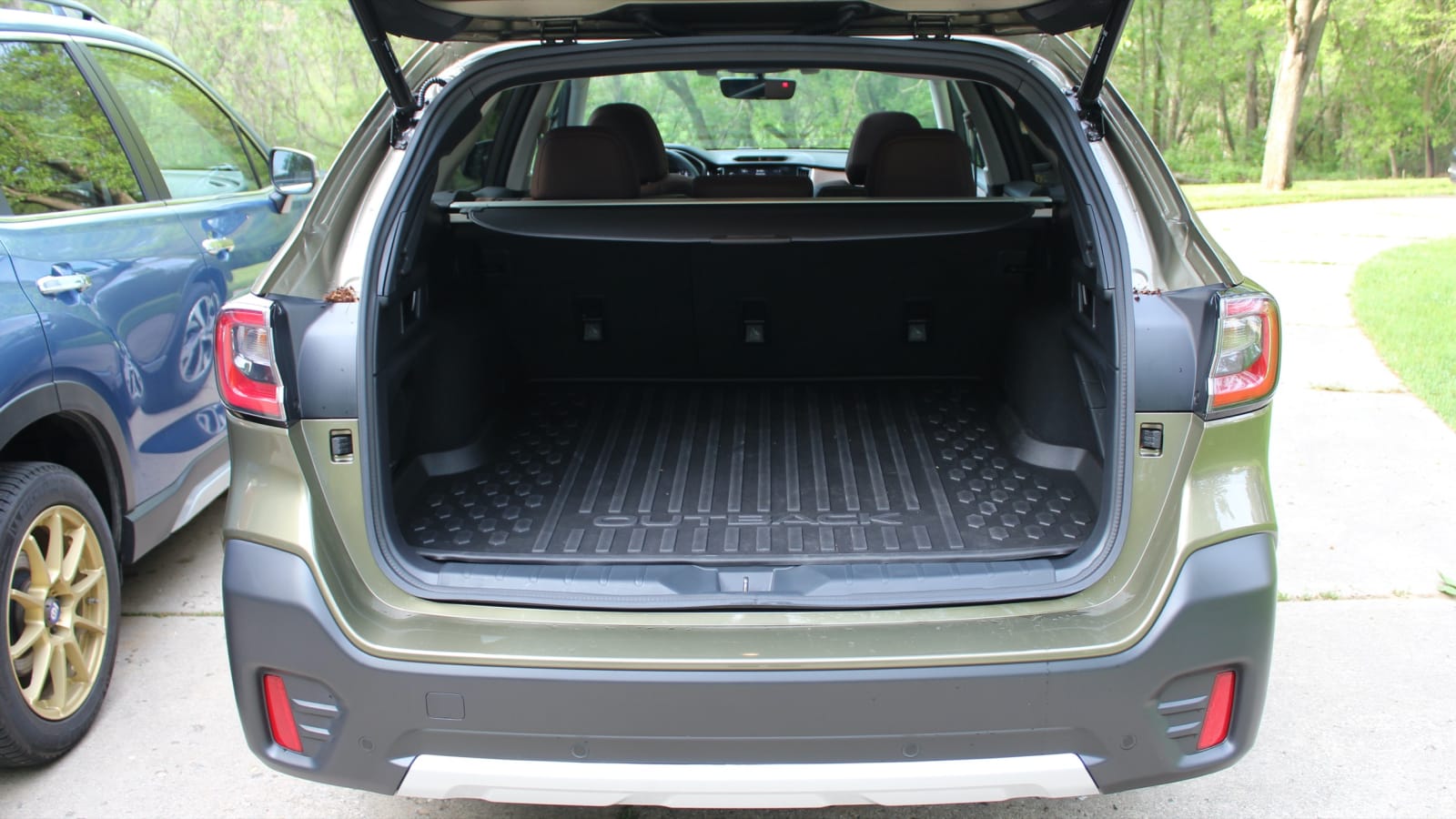 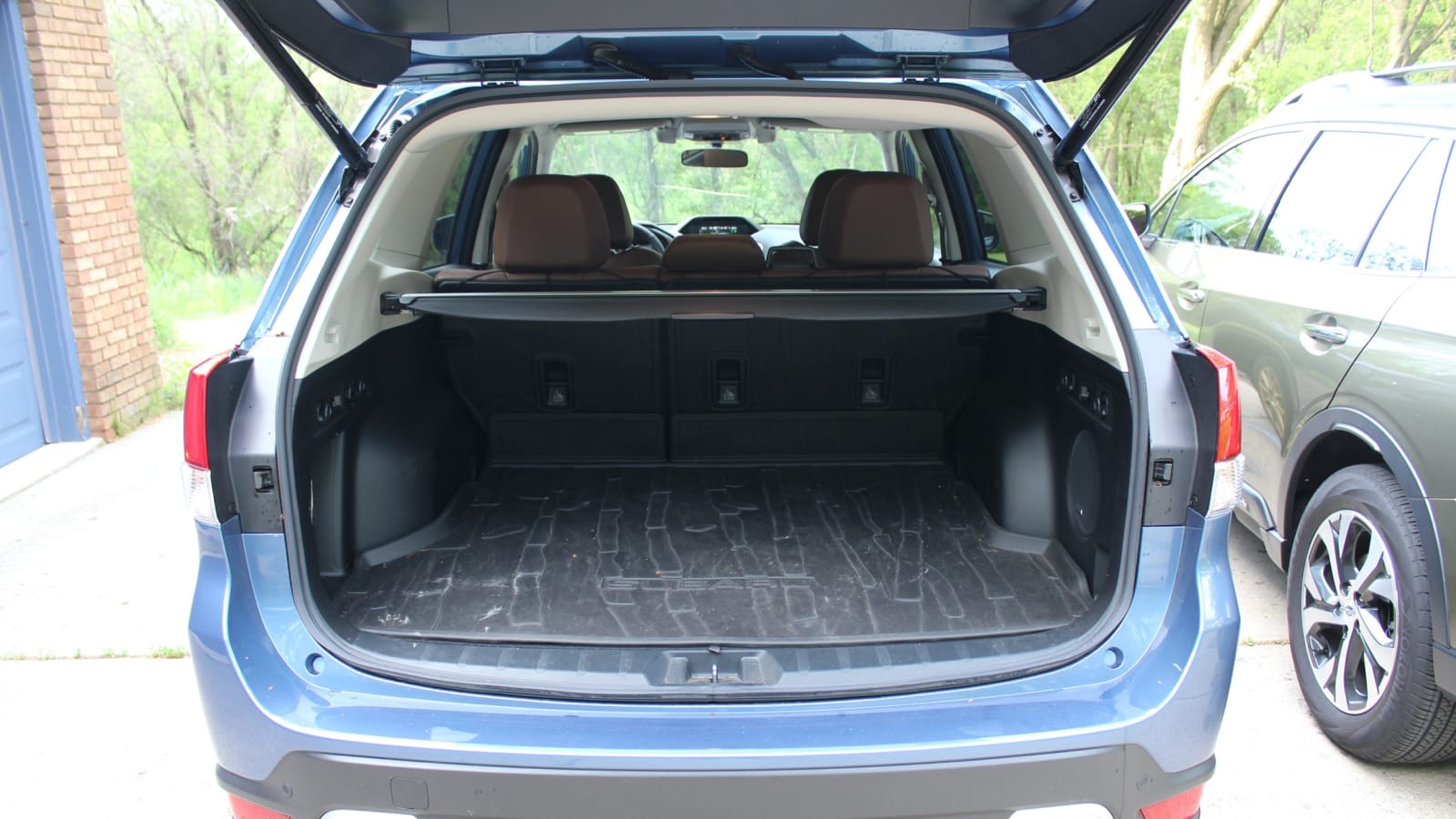 This is the most obvious and probably the most important difference between the two vehicles, on par with price. The Outback is the bigger vehicle of the two, but interestingly enough, they have similar amounts of cargo space on paper, with the Forester at 31.1 cubic feet, and the Outback at 32.5 behind the rear seats. (Max cargo area is a similar story, with the Forester seeing a 0.4 cubic-foot advantage at 76.1).

However, the spec sheet doesn't tell the whole story. It’s the shape of that rear cargo area that really makes the difference. Some rough measurements in my driveway were illuminating. Both are the same width between the wheel wells, at about 43 inches. However, the Outback's cargo floor is 7.5 inches longer than the Forester's, while its height is 2.7 inches shorter. It's also compromised by the shape of its tailgate, which tapers inward at the glass. The Forester is more of a box, with its full cargo height extending nearly all the way to the rear.

This means that the Forester is better at carrying tall, boxy objects. However, longer flatter items will fit better in the Outback, and for typical usage — groceries, sporting equipment, a road trip's worth of gear — the Outback wins for its larger cargo footprint behind the rear seats.

As for passenger volume, there’s very little difference to speak of in terms of what matters, particularly legroom. The Forester offers more headroom, but unless you’ve got a family full of basketball players, you probably won’t notice much of a difference, as the Outback’s headroom is ample. 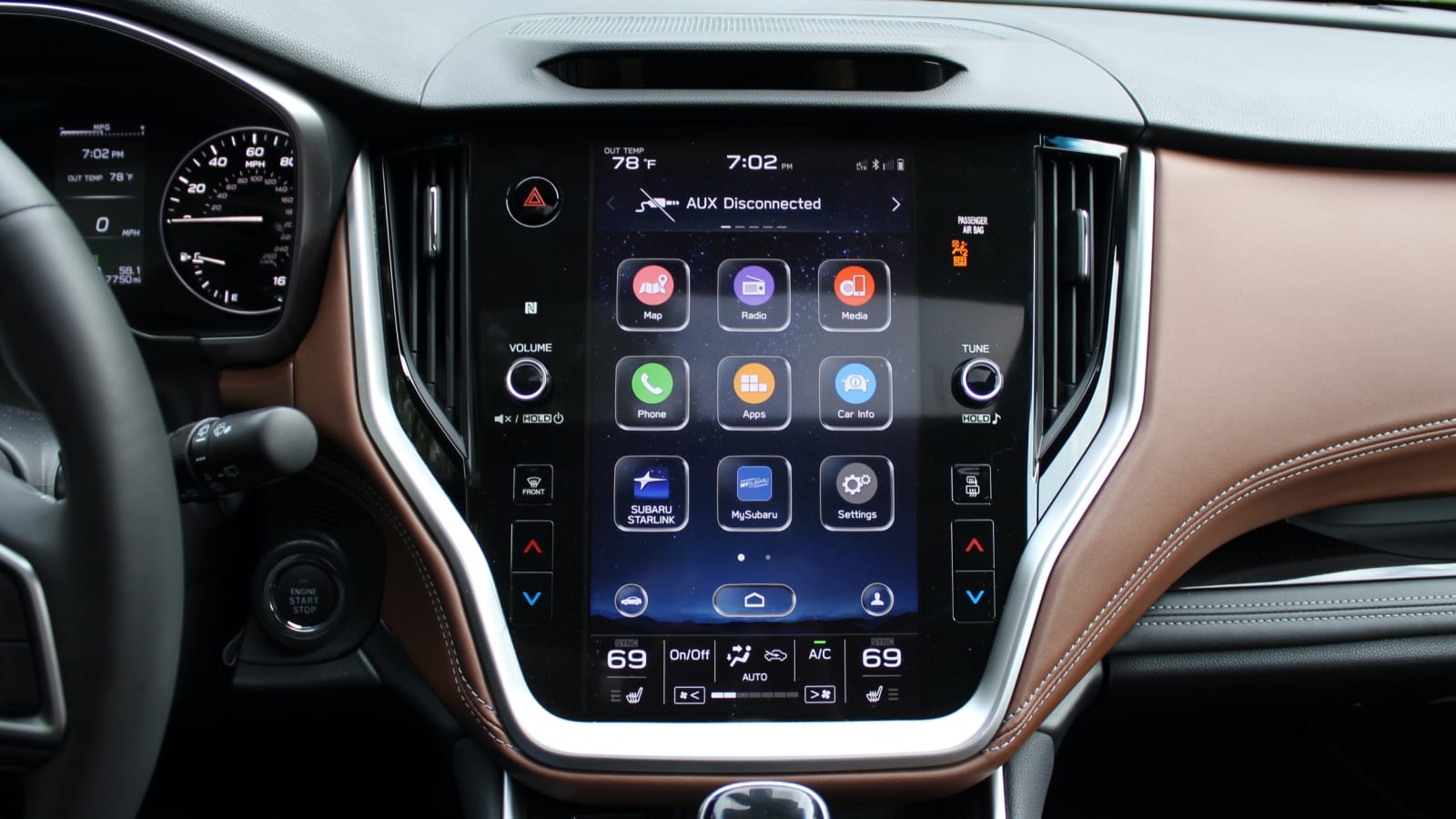 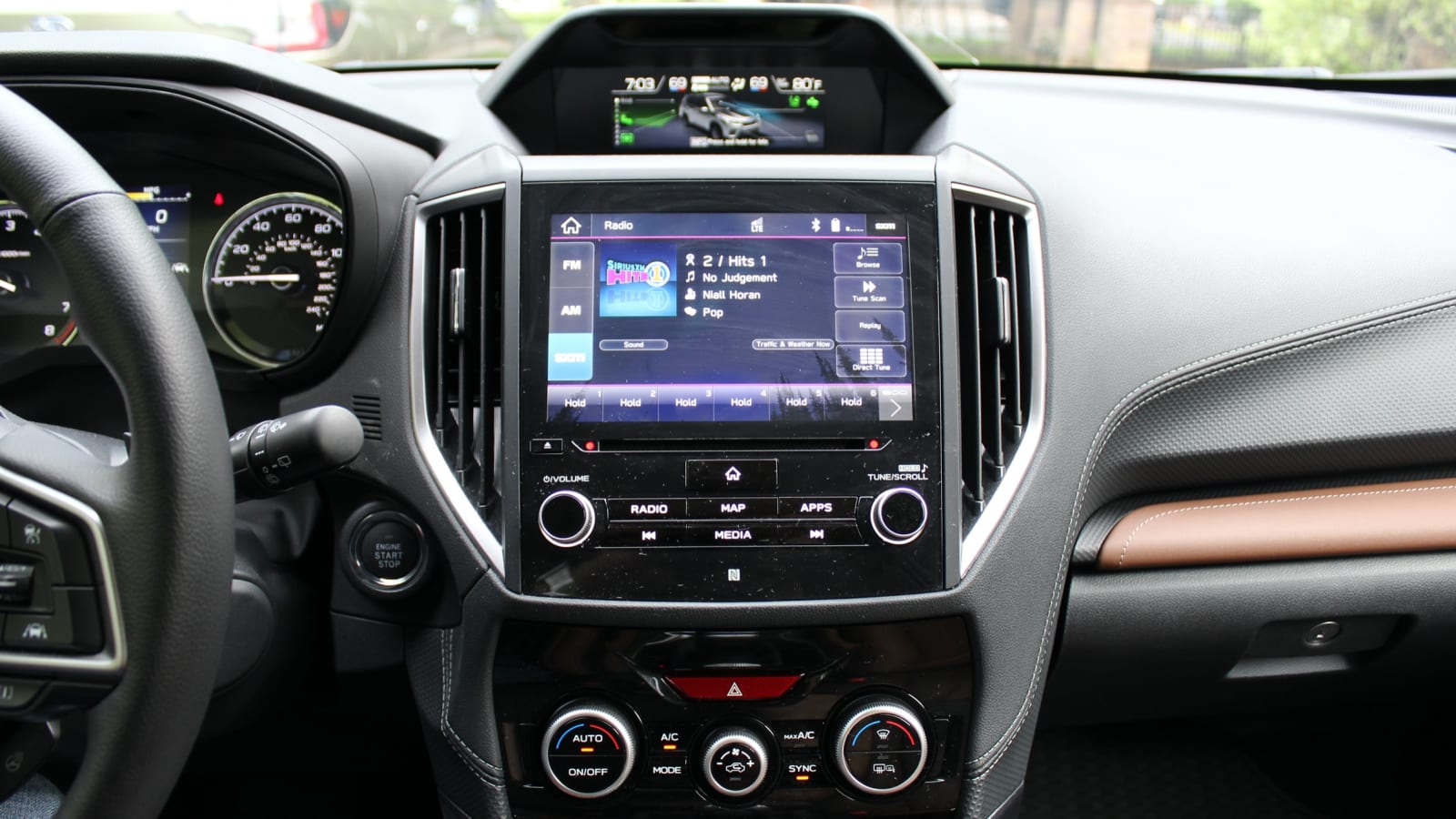 The Outback is by far the better choice here. All but the base trim have the new, gigantic tablet-style display (almost 12 inches) that puts all its various infotainment functions at your fingertips. It takes a little time to learn the locations of all the functions, but once you’re familiar, it’s nice to have it all in one place.

The Forester, on the other hand, is a bit more complicated. It has a smaller, 8-inch touchscreen, which is less extravagant to behold but may actually be easier to use in some ways. The bigger concern is the multifunction display above it. Operated with steering wheel buttons, it's clunky to operate, and it can hard to remember which interface controls which vehicle function. The answer often seems arbitrary.

Both cars offer Subaru’s Eyesight driver assistance tech, including forward emergency braking, adaptive cruise control, lane departure warning and lane keep assist. Our 2019 Forester doesn’t help you steer with lane centering, but the 2020 model is on par with the Outback in that regard. Also available on each is the DriverFocus active driver monitoring system, which helps to assure you’re paying attention to the road in front of you. DriverFocus can also recognize your face, and tailor certain features (like seating position) to your preselected settings as soon as you slide into the driver’s seat. After testing it, we wouldn't go out of our way to make sure our Subaru came with DriverFocus, regardless of model, unless we were sharing the car with young drivers who might need every bit of extra monitoring. 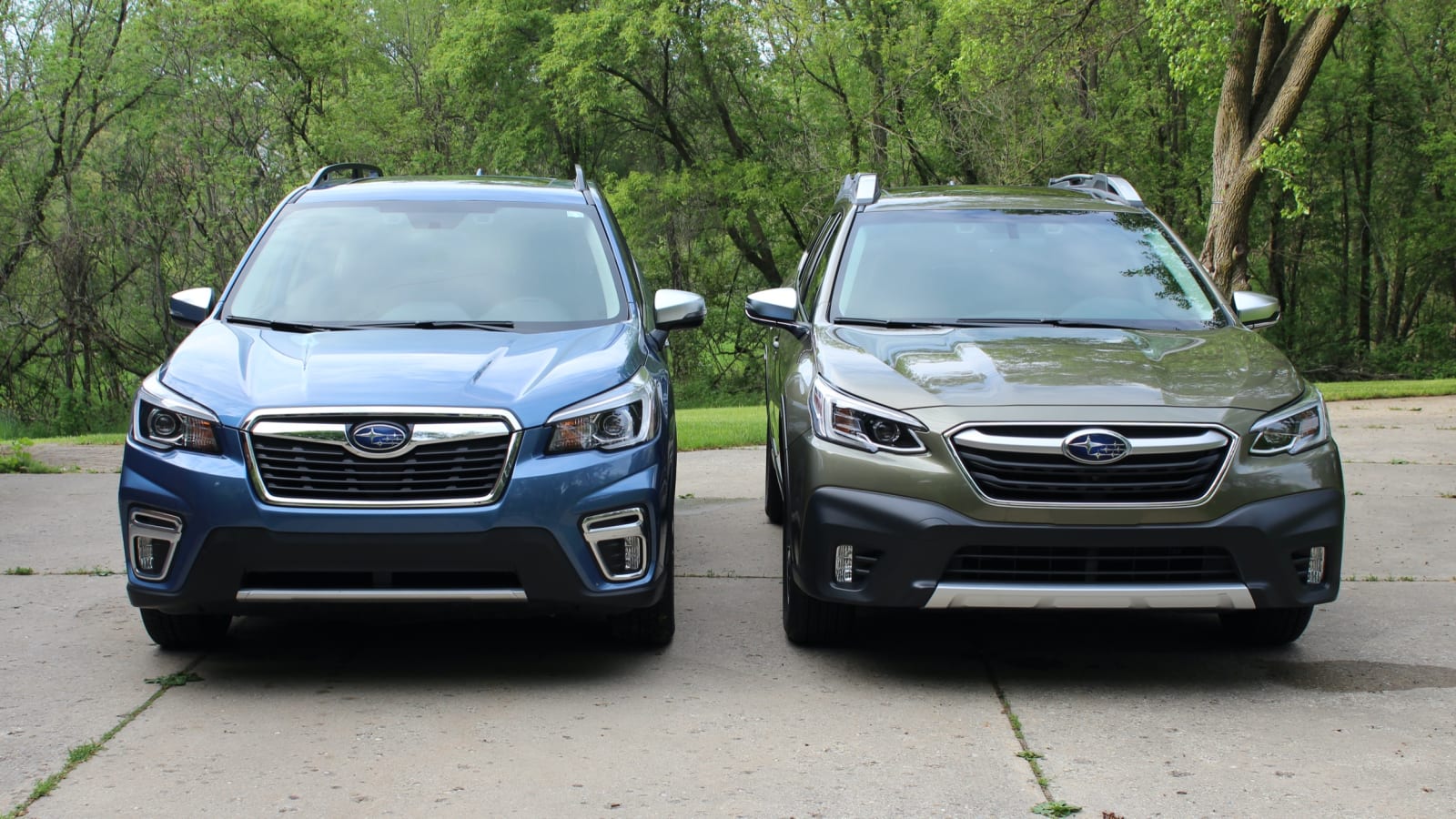 Again, the Outback is the winner here. Fit and finish are simply better. Where materials can clash in terms of look and feel in the Forester, they play together better in the Outback. From a brand that has struggled to makes its interiors look and feel upscale, the Outback achieves a sense of quality, while the Forester can still feel planted in the economy realm. The Outback’s seats are Subaru’s best yet, with just the right amount of support in all the right places and taut-but-pliant Nappa leather in the range-topping Touring we tested.

That’s not to say the Forester is bad. It has actually served us quite well on many multiple-hundred-mile trips with nary a complaint from our rear end. We’d just rather spend that time in the Outback.

Other features the Outback offers that the Forester lacks are ventilated seats, a hands-free power liftgate, auto-dimming rear-view mirror, a cargo cover that can retract with a mere pat, and rear seat levers in the cargo area. In short, the Outback is the more premium vehicle in both interior quality and feature content. 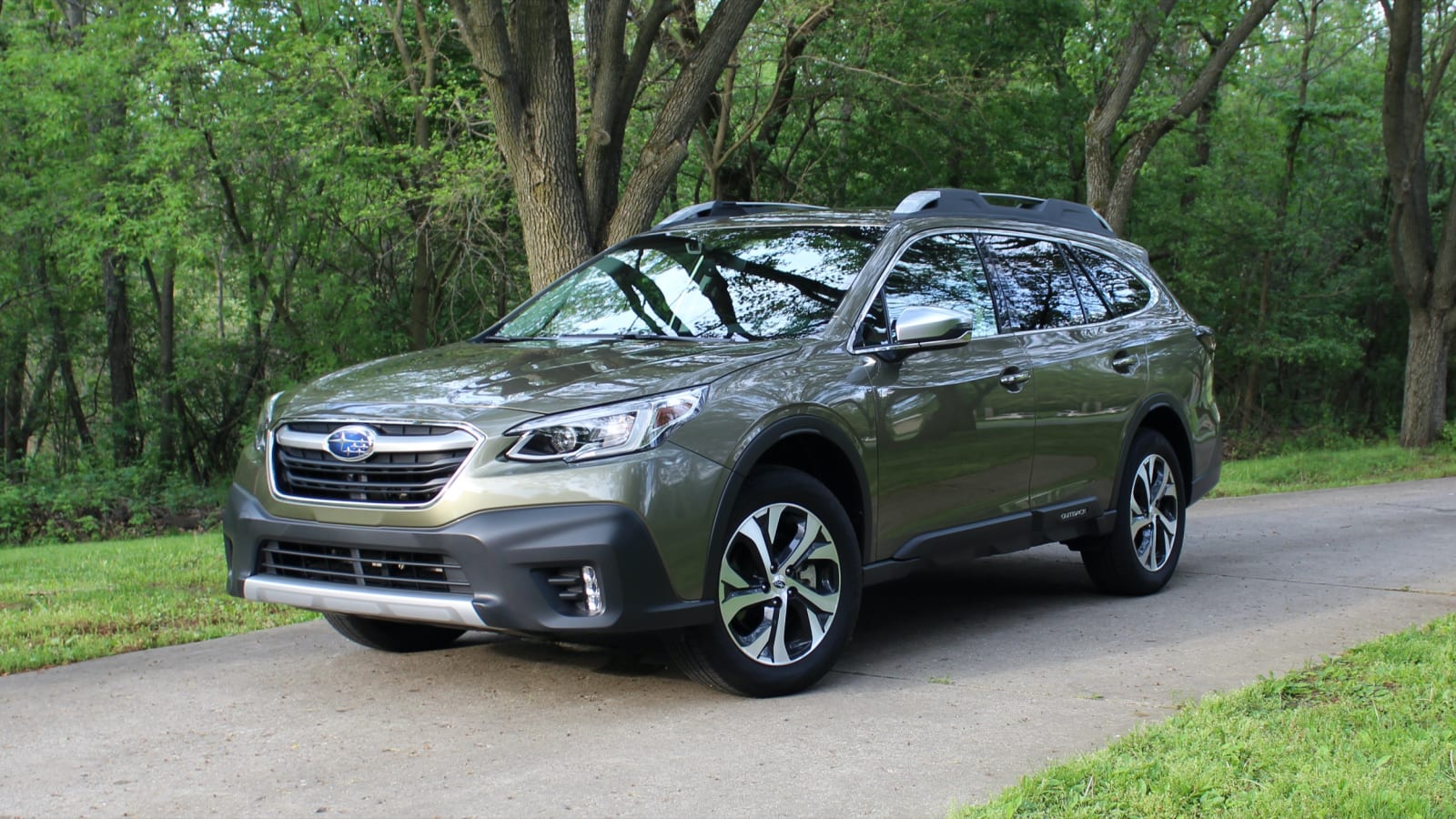 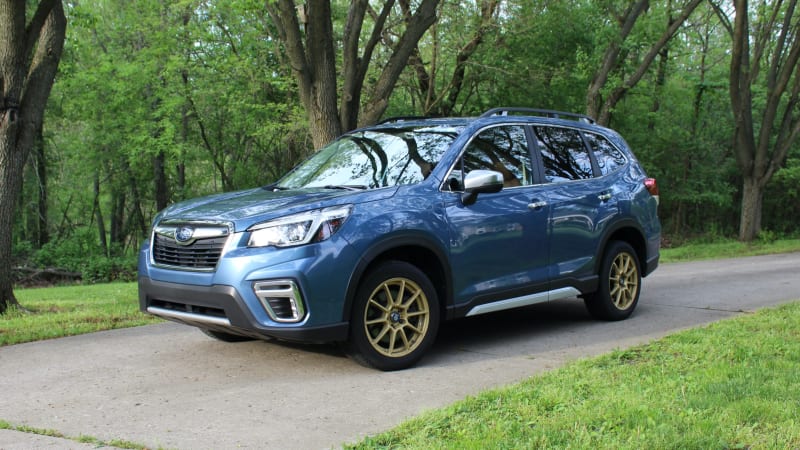 This is subjective, of course, but we argue the Outback is the better-looking vehicle. It has more curves and a bigger presence than the humble Forester. It looks more like a wagon than an SUV, while the opposite can be said for the Outback.

If you like a more utilitarian approach, you might dig the Forester more. Its proportions are tighter and boxier, overall, with its form following the function of being the more city-friendly, maneuverable vehicle. One big advantage the Forester’s tall cabin has over the Outback — and over most of the vehicles on the road, frankly — is that it makes for excellent visibility. The windows in all directions are huge, and give you a good sense of what’s directly surrounding you. The Outback’s physical boundaries are visually more vague.

On the road the wagonish Outback feels more car-like, which ought not surprise anyone considering its similarities to the Legacy sedan. We like the way its longer wheelbase helps it track true on the highway, and how its lower height and extra width allow it to feel more stable tracking though corners. The Forester, on the other hand, is a mite more twitchy.

Additionally, the Outback’s steering just feels better. There’s a more progressive heft to the steering, and it begins to feel even better on loose roads where it sails over stones with composure. We notice a bit more chatter through the Forester's chassis, and it requires more steering corrections than the Outback.

The Forester might have better angles of approach and departure, but the Outback is more confident and comfortable when the roads get rough or nonexistent. Neither of these are rock crawlers, but they’re good enough in snow, dirt and mud to get you to your remote cabin or campsite. How they perform off-road shouldn’t be what determines which you choose, but they’re near enough in capability that this is essentially a tie. Instead, pick the Outback for it’s on-road demeanor. 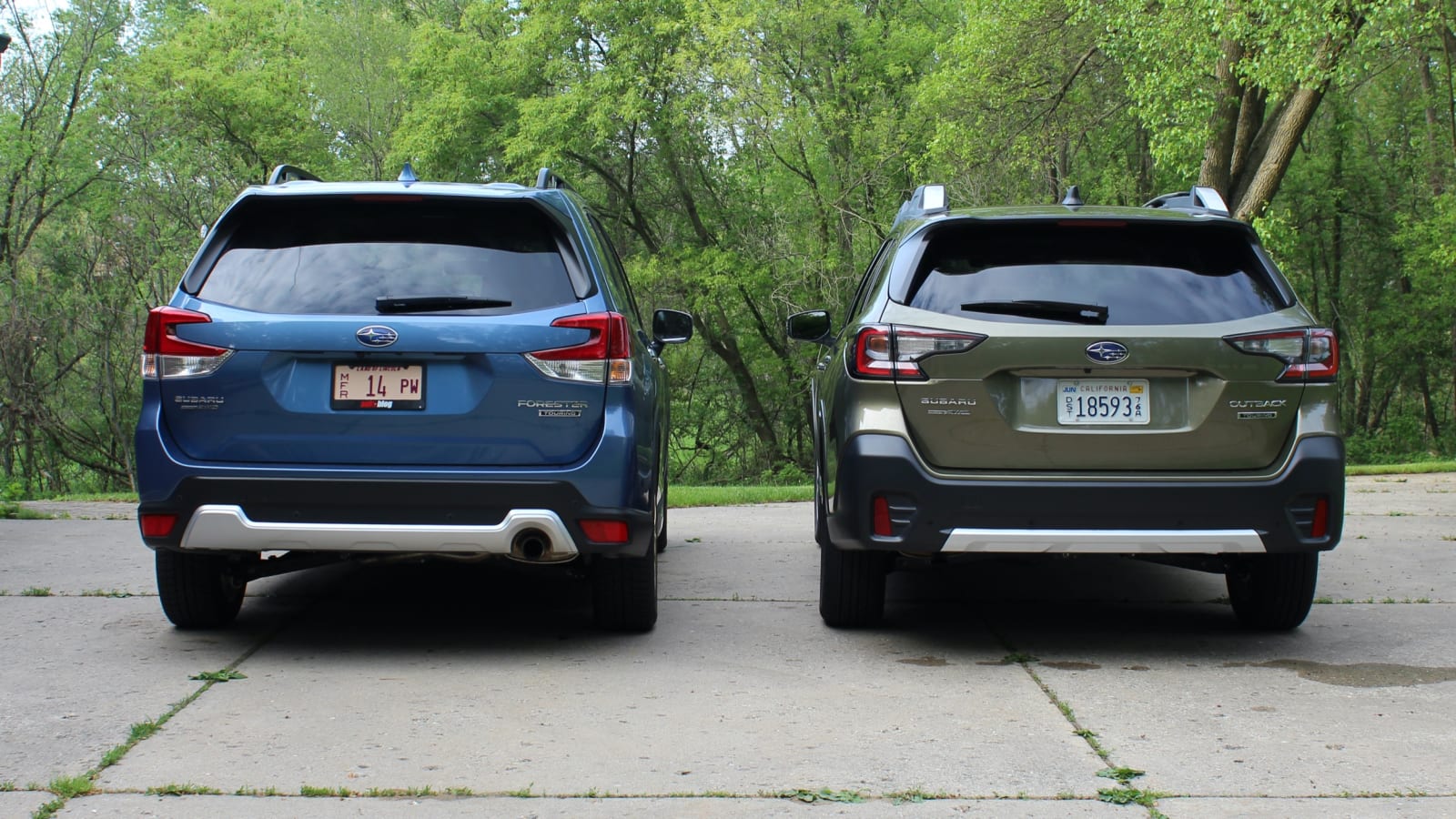 These two Subarus are closer in price than you might expect, at least at their base levels. The 2020 Forester starts at $25,505 (including $1,010 in destination fees). The base Outback starts at $27,655. The Outback can be had in more varieties, however, and the price differential is greater when you compare the top end of each model lineup.

Finally, should you care about your Subaru's country of origin, the Outback is built in Indiana whereas the Forester hails from Japan.

If it hasn’t been clear enough, we like the Outback better than the Forester, all things considered. The stronger interior quality, the stable ride, the superior infotainment technology and the better (we think) looks make the Outback well worth the reasonable price premium over the Forester. The turbocharged engine option in the Outback only extends its appeal to a broader customer set. Sure, there are some situations where a Forester might be a better fit for a buyer — things like the taller interior space, better visibility and improved maneuverability are all valid reasons one would go that route instead. For the rest of us, there’s the Outback.