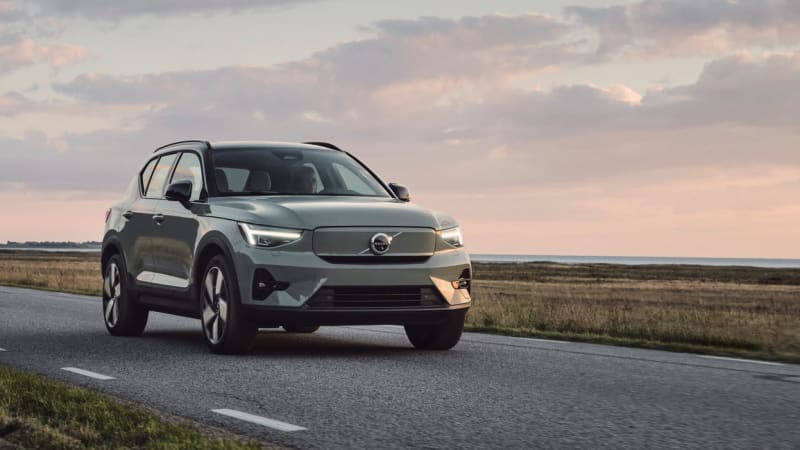 Volvo announced a round of updates to the electric members of its portfolio. It gave the XC40 Recharge a subtle mid-cycle update that brings a new-look front end, among other changes, and it unveiled an entry-level version of the C40 Recharge with one electric motor.

It takes a well-trained eye to differentiate the updated XC40 Recharge from the model that's currently in showrooms. Look closely and you'll notice that the lower part of the front bumper is more chiseled, the Thor's Hammer accents in the headlights are more, well, hammer-like, and the body-colored insert that replaces the gasoline-burning model's grille loses its frame. These changes bring the battery-powered crossover in line with the C40 Recharge and with the non-Recharge version of the XC40, which received the nip-and-tucked front bumper in November 2021. Volvo also notes that buyers will also have new upholstery choices, exterior colors, and wheel designs to choose from.

XC40 Recharge models also gain pixel LED lighting technology. This system relies on individually-controlled LED elements to illuminate the road ahead without blinding other motorists; in a way, it occupies a middle ground between high and low beams. While this technology has been illegal here for many years, the NHTSA finished making the rules for adaptive headlights in February 2022 so they're on their way.

Moving on to the C40 Recharge, a front-wheel-drive version with a single electric motor is now available in some markets as a cheaper alternative to the dual-motor all-wheel-drive model. It's fitted with a 69-kilowatt-hour lithium-ion battery pack, and it offers a maximum driving range of about 270 miles on the relatively optimistic European testing cycle. Volvo notes that charging the pack from 10% to 80% takes about 32 minutes when it draws electricity from a fast charger, but the firm hasn't provided technical specifications (like horsepower).

For context, the existing dual-motor C40 Recharge is equipped with a 78-kilowatt-hour battery and its powertrain is rated at 402 horsepower and 487 pound-feet of torque. Its EPA-estimated driving range checks in at 225 miles, and it tips the scale at approximately 4,740 pounds.

Volvo also restructured the trim level hierarchy in a bid to reduce complexity and make it easier for buyers to configure a car. Pricing for the updated 40-Series models hasn't been released yet, and neither car has been announced for the American market yet. Volvo told Autoblog that it has nothing to announce regarding American availability as of writing but that more information will be released this spring.