Volkswagen Viloran MPV is an 'executive-level living room' on wheels 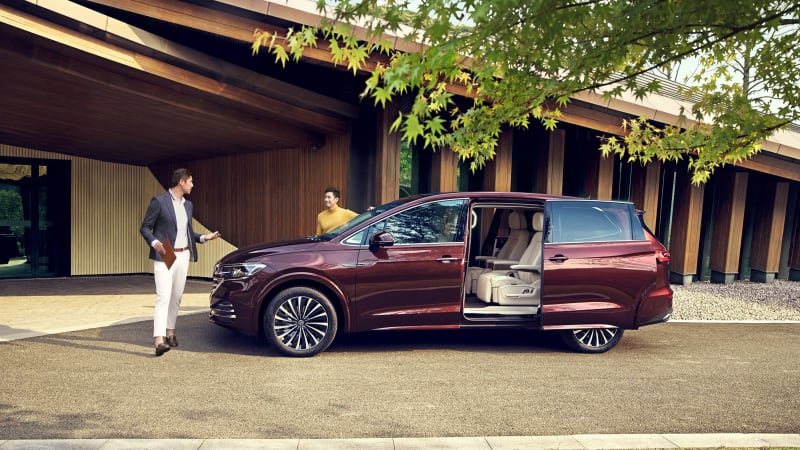 China is catching up to the crossover follies swallowing most other markets, but minivans — or MPVs — remain quite popular, especially large luxury models. Volkswagen hasn't had anything in that space to challenge stalwarts like the Buick GL8 and new entries like the Lexus LM, until now. The Viloran, a joint product with local partner SAIC, just debuted at Auto Guangzhou to correct the omission. The Viloran gives off Chrysler Pacifica vibes at first blush, but upon closer inspection looks like a stretched version of VW's European Sharan MPV with the front fascia of a Touareg and a shapelier rear end. Unlike the flat-sided Sharan, designers added strong character lines along the flanks to add texture to the Viloran's length; at about 209 inches long, the MPV is 18 inches longer than the Sharan or 5 inches longer than the Pacifica.

VW says the stretch job and amenities create an "executive-level living room" inside, a huge perk in a country where the chauffeured class is so wide-ranging that even the Mercedes-Benz A-Class gets a long-wheelbase version. Accessing the Viloran's cabin through sliding doors on both sides reveals a 2-2-3 seating format, with second-row reclining captains' chairs boasting electrically-operated footrests. There's also a panoramic roof, adaptive cruise control, traffic jam assistant, cameras surrounding the vehicle, and a "Royal Hall-level Dynaudio" stereo system.

Built on the MQB platform, the engine is believed to be a 2.0-liter EA888 turbocharged four-cylinder with 217 horsepower and  258 pound-feet of torque, shifting through a seven-speed DSG transmission. Only the front wheels are driven for now. It's not clear yet if all-wheel drive will be offered, nor if the Viloran will be exported to other markets.

The MPV is another front in VW's continuing push to increase share in China. The German automaker said it will sell more than three million cars in China this year for the third consecutive year, as it has increased its market share almost a full percentage point. The aim being 'to become the preferred brand of consumers in all relevant market segments in China,' VW has launched five new models there this year and has another five new models planned for 2020. As part of that effort, VW and local partner FAW are expected to release a crossover version of the Viloran.