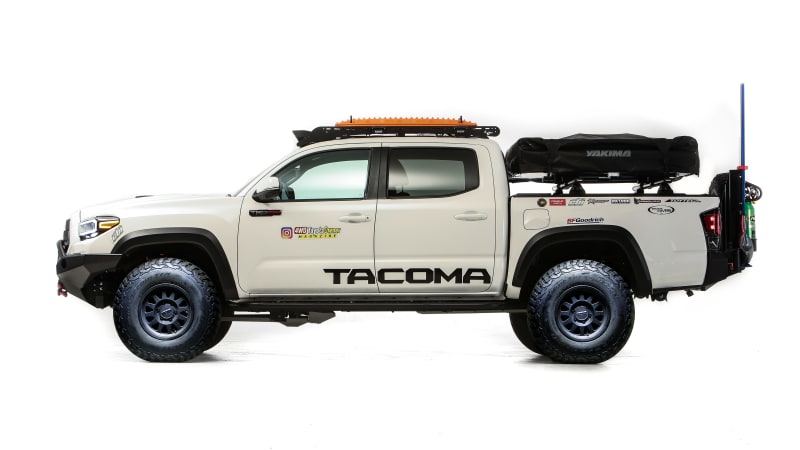 Toyota has been for years one of the biggest OEM supporters of SEMA, the aftermarket advocacy group and show organizer. The SEMA Show has been canceled this year (because 2020) but that doesn't mean the parade of wildly customized cars has ceased. Instead, it's moved to an online format called SEMA 360, giving companies a chance to show off the project cars they've spent all year building.

These days, a customized Toyota is much more likely to be a lifted truck than a slammed Celica or MR2. Capitalizing on the popularity of overlanding, or living out of a self-sustained off-roader, Toyota has created a supercharged Tacoma capable of 370 horsepower and 330 pound-feet of torque.

To bring this mobile basecamp to remote wildernesses, it features a Toyota E-locker differential, suspension lift, BFGoodrich Mud-Terrain tires, and aftermarket upper and lower control arms. A nose-to-tail aluminum skid plate, aluminum bumpers, and rock sliders keep the rig protected from mother nature. To avoid sticky situations, there's a 40-inch LED light bar and a winch should that not be enough. Finally, there's a foldable roof-top tent, a rack system to haul around any supplies you might need, and the obligatory snorkel.

On the other side of the modding spectrum, Toyota has put together a trio of sports cars, beginning with something called the Ornamental Conifer GR Supra. As far as we can tell, it's just a Supra painted with a bunch of hypebeast slogans you'd find on $150 T-shirts sold on LA's Fairfax Avenue. Billed as a collab with a pop culture outfit, it appears to offer zero performance upgrades.

The same can't be said for the two remaining Supras, which follow a much more traditional customization theme. While both are built for the Formula D drift series, tuners at GReddy and Papadakis Racing have revamped their respective GR Supras with vastly different parts. After all, drivers Ken Gushi and Fredric Aasbø will be competing against each other when the 2021 season kicks off.

Famed Japanese tuning house GReddy has boosted the stock 3.0-liter straight-six with a massive BorgWarner EFR 9280 turbo and mated the mill to a six-speed sequential transmission. A Rocket Bunny wide-body kit sits over a custom chassis and suspension, and Rays Gram Lights wheels to keep it dramatic when going sideways.

While Toyota didn't disclose outputs for the GReddy Supra, its Papadakis Racing-built sibling boasts an outrageous 1,033 horses and 908 lb-ft of torque. That's quite a bump over the stock 382 hp and 368 lb-ft, and can be attributed to completely custom engine internals, more generous fuel injectors, and tailor-made engine management.

Toyota says this is merely the first wave of the SEMA specials it plans to unveil. A second wave will arrive in about two weeks.