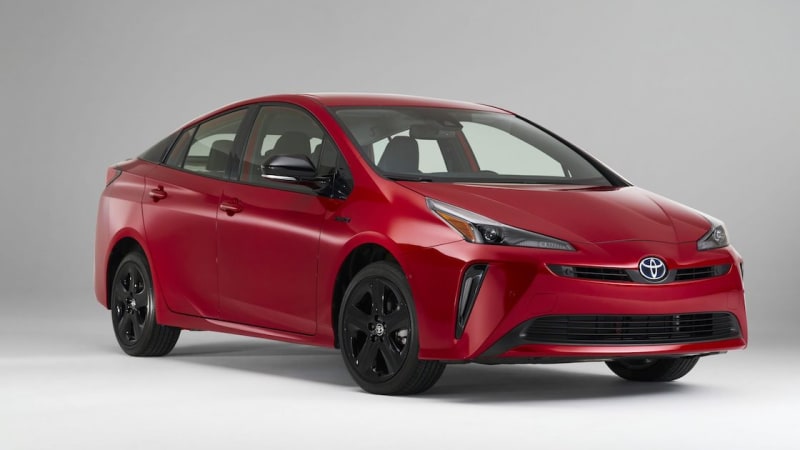 Toyota is marking the 20th anniversary of its groundbreaking Prius hybrid by officially announcing a sportier-looking commemorative edition of the car called the Prius 2020 Edition. It’ll be a 2021 model, and Toyota will limit production to 2,020 units.

Also, Toyota divulged that it plans to introduce a pair of all-new hybrid models via a livestream unveiling from its North American headquarters near Dallas on May 18. More on that in a moment.

Many of the features of the 2020 Edition echo the 20th edition version Toyota released in Japan in 2017 (the Prius debuted there in 1997). It will be based on the Prius XLE FWD model, not the all-wheel drive variant offered on the Japanese commemorative edition, and as expected it will be available in Supersonic Red or Wind Chill Pearl, but it won’t offer the contrasting black roof. Black accents abound elsewhere, however, including inserts on the 17-inch wheels, B-pillars and mirror housings, plus a black shift knob and interior A-pillar panels and smoked headlights and HVAC vents. It also comes with “2020” insignia key fob with glove and floor mats, and a rear spoiler.

Toyota tells us the release day will be in mid to late September, but pricing isn’t yet available. For comparison’s sake, the 2020 Prius XLE Liftback starts at $29,330 including destination. Toyota says its ultimate fuel-sipper will deliver an estimated 54 mpg in the city, 50 mph highway and a combined 52 mpg. Toyota says it has sold more than 6 million models sold globally, and 1.9 million here in the U.S. since going on sale in 2000 as a 2001 model.

As for next week’s two hybrid reveals, Torque News speculates we’ll be seeing the Sienna minivan move to a hybrid-only powertrain as well as the return of the Venza. We saw spy shots last year of a Sienna riding on Toyota’s TNGA platform. It’s also not the first time we’ve heard rumors about the Venza being brought back with a combustion engine and electric motors. It could rely on the same 2.5-liter four-cylinder that partly powers the RAV4 Hybrid and Highlander Hybrid. We’ll know more soon.