Before Toyota introduced the High Riding Coupe to the market — known to us as the C-HR — the automaker showed two concepts at European auto shows in 2014 and in 2015. The second-generation C-HR will reach dealerships in the near future, so it's time for another concept. The automaker's European Design Development center drew the first, and the France-based designers are back with the second, called the C-HR Prologue Concept.

The design details on the first concept had names like Diamond Shape for the sheetmetal and Keen Look for the front fascia. This new concept is advertised as going even bolder, with even shorter overhangs, "diamond-cut" sheetmetal, a "hammerhead" face, and a tri-tone color scheme. Side-by-side photos show how the new concept has advanced from the 2015 version. It's likely that much of what we see is what we'll get, although the tri-tone might be a bridge too far. 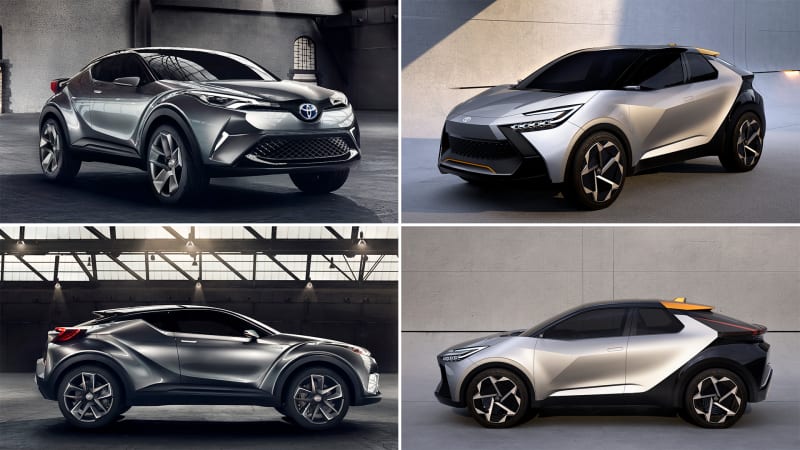 The big news is the addition of the plug-in hybrid powertrain for the European market, the internals borrowed from the new Prius Prime. Over there, it will join the two standard hybrid models, one a 122-horsepower trim with a 1.8-liter heart, the other a 184-hp trim with a 2.0-liter heart. If the Prius' output figures carry over, a top trim C-HR perhaps given the GR moniker would climb to 220 hp. A more modest power boost closer to 200 horses is a better bet. Project manager Andrea Carlucci said the 1.8-liter version will carry on in order to keep the C-HR's price point accessible.

Toyota hasn't mentioned battery capacity for the PHEV, only saying the packs will be built in Europe. There are also no other details about what else to expect from the successful C-segment entry save that it's got more interior room.

We don't get the hybrid, our market limited to a non-hybrid 2.0-liter gas engine with 144 horsepower. If the previous concept-to-market cadence holds here, the second-gen C-HR should roll out in about a year for Europe, and we'll find out how much of the new goodness is headed our way.