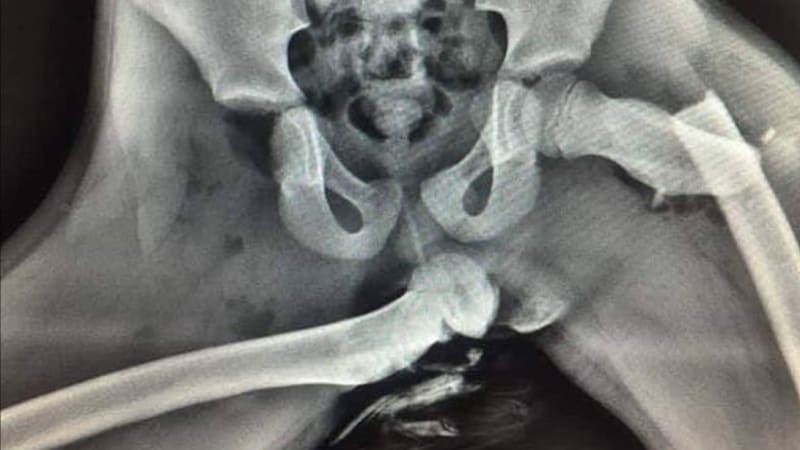 You surely know that riding with feet up on the dashboard is unsafe. The injuries in a crash could be severe, and even a minor accident in which airbags deploy could have dire consequences. But if you can't convince the person who rides shotgun with you, this image should do the trick.

The X-ray, which, understandably, is careening around the internet today, shows the aftermath of a car crash in which a young woman in Wales was riding with feet up. One femur is snapped, while one hip is broken in the socket and the other has been dislocated far from where it should be.

Police who released the X-ray described the woman's injuries as "life changing."

The Daily Mail's account of the X-ray mentions that Audra Tatum, of Chickamauga, Georgia, was permanently disabled in 2015 by a minor accident. Everyone else in the car received minor scratches and bruises. But the deploying airbag threw her foot into her face, breaking her nose, femur, and her ankle in four places.

"Basically my whole right side was broken, and it's simply because of my ignorance," Tatum said. "I'm not Superman. I couldn't put my foot down in time."

A sad irony is that Tatum was herself an EMT, a job that, two years after the accident, she could no longer do.

The Chattanooga, Tenn., Fire Department issued a vivid Facebook post years ago that has been widely shared. It said in part: "Airbags deploy between 100 & 220 MPH. If you ride with your feet on the dash and you're involved in an accident, the airbag may send your knees through your eye sockets."

So: Seatbelt on. Sit up straight. Feet on the floor. That's how you car will best protect you.

Here is an X-ray of horrific injuries sustained to the front seat passenger who had their feet on the dashboard at the time of a collision. If you see your passenger doing it stop driving and show them this. pic.twitter.com/f3XCT8ePvi