This marmot socially distanced itself right into an engine bay 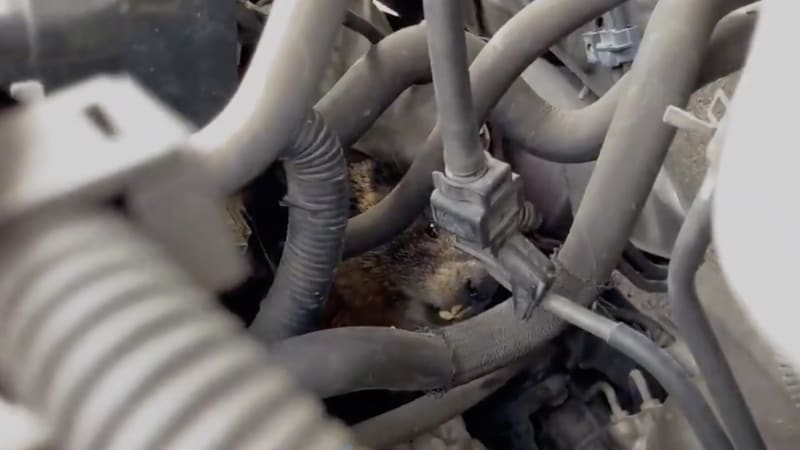 A Jiffy Lube mechanic in Utah encountered a unique car issue last week, and this one couldn't be fixed with a manual or diagnostic. When a woman dropped off her car at a Springville, Utah, location, the employees found a marmot (they thought it was a beaver) sitting in the engine bay. According to KSL, the shop called the Utah Division of Wildlife Resources (DWR) and watched as an officer extracted the animal.

Squeaks are a common noise to come out of an engine bay, but they're usually caused by a belt or loose bolt. This time, the squeak was coming from a marmot, a large ground squirrel that is common to the Utah area. When the Utah DWR arrived to retrieve the animal, it was buried beneath a web of hoses and wires.

Utah Division of Wildlife Resources conservation officer Sean Spencer handled the rescue. With the help of one of the mechanics, he used a catchpole to secure the marmot, pull it out of the engine bay, and put it in a small portable animal cage. The marmot was unharmed, so the DWR released it right back into nature at a nearby wildlife management area, as seen in the video below that captured the entire story.

A marmot stuck in an engine bay is a rarity but animals getting stuck in cars is something that occurs multiple times each year. In the past, we've seen squirrels, cats, dogs, and golden eagles. Maybe it's time for Jiffy Lube garages to keep a catchpole on hand (it's not).

"Excuse me, ma'am? There's a strange sound coming from your car. I think we may need to call DWR." 😬 The animal was safely removed and released at a nearby Wildlife Management Area. #Utah #WildlifeManagement pic.twitter.com/7mnVuf2hha