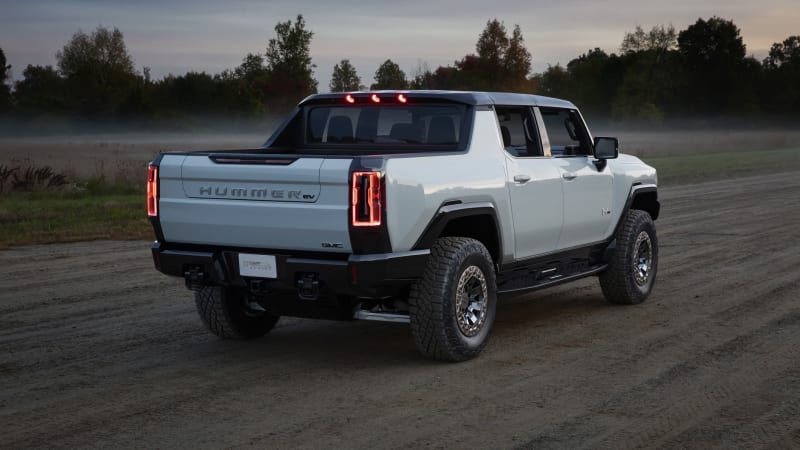 When the 2022 GMC Hummer EV was revealed, GMC noted that there would be lower trims available. The company has since provided a few more details on those lower trims, which is helpful to know now that the only trim on sale next year, the Edition 1, was sold out in a scant 10 minutes. However, it's going to be a long time before they're all available.

The entry-level GMC Hummer EV is the EV2. This is the model that will start at $79,995, and unlike the Edition 1, it gets just two motors, one for each end of the truck, each with electronically locking differentials. Output is down to 625 horsepower and a torque rating of 7,400 pound-feet. Note that this and all other reported torque numbers are after the torque multiplication by the single-speed transmissions, hence the extremely high numbers. The company hasn't given torque numbers at the motors, which would be more comparable to other electric cars. Range is also reduced to 250 miles, probably due to a smaller battery pack. Fast charging is also restricted to 400-volt charging, so it won't be as fast as the higher trim models. The removable roof panels, retractable rear window, MultiPro tailgate, Super Cruise and 35-inch tires are standard. This model only gets fixed steel suspension and two-wheel steering. The EV2 will be the last of the trim levels to go on sale, with a target of spring 2024. Yes, as in 3.5 years from now.

The next level is the EV2X, which will be available a year earlier in the spring of 2023. It gets the same powertrain as the EV2, but adds 800-volt fast charging and a 300-mile range. It also gets the adaptive air suspension and four-wheel steering, plus the associated party tricks of Crab Mode and Extract Mode. This model costs $89,995.

The earliest Hummer EV that isn't an Edition 1 and therefore not yet sold out will be the EV3X, the entry-level three-motor model. It goes on sale in the fall of 2022 at a price of $99,995. It's not quite as potent as the Edition 1, though, with an output of 800 horsepower and 9,500 pound-feet of torque. It also lacks the "Watts to Freedom (WTF)" launch control feature. But it does get torque-vectoring with the dual rear motors, which can also lock their speeds to be equal like with the mechanical locking differential at the front. The EV3X's range is 300 miles like the EV2X.

As for the Edition 1, it started $112,595 before it was sold out. Customers are to expect them in fall 2021. It has transparent roof panels, a 350-mile range, launch control and the headline-grabbing output of 1,000 horsepower and 11,500 pound-feet of torque (again, with the aforementioned torque figure caveat). GMC hasn't said whether there will be additional examples offered later, or an equivalent trim. We're expecting many of the Edition 1 features will at least be available as options on the EV3X.