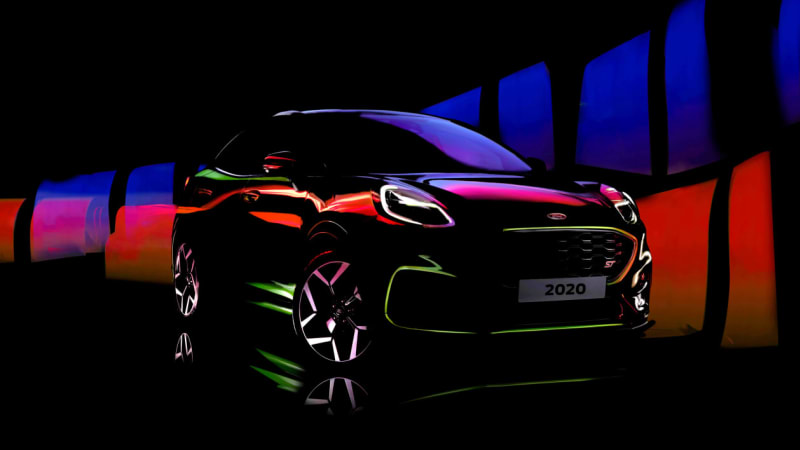 Introduced in 2019, the Puma slots above the EcoSport in terms of size and price in Ford's European range of crossovers and SUVs. It gets its name from a Fiesta-based front-wheel drive coupe sold between 1997 and 2002, but it doesn't earn the performance label in its standard configuration. The upcoming ST model will change that by borrowing the turbocharged, 1.5-liter three-cylinder engine from the Fiesta ST, according to Autocar.

The triple makes 200 horsepower and 214 pound-feet of torque when it's bolted in the Fiesta's engine bay. It's too early to tell if these figures will carry over to the Puma, or if Ford will tune the engine differently. Transmission options remain unconfirmed, too, but we wouldn't be surprised to see a six-speed stick on the menu.

The psychedelic preview image published by the Blue Oval does an excellent job at keeping the Puma ST's full design under wraps. It appears to receive a deeper from bumper with bigger air vents and alloy wheels similar to the ones the aforementioned Fiesta rides on. It also seems to ride lower than the regular Puma, too, which hints at suspension modifications that will ensure it handles as well as it accelerates.

Ford will reveal the Puma ST in the coming months, and the crossover will go on sale in Europe and other global markets before the end of 2020. We have no reason to believe it will join the Edge ST and the Explorer ST in American showrooms, because the standard model isn't on its way here due to its pocket-sized dimensions. But you tell us in the comments, would you be interested in this?