The Tesla Model Y is the first good SUV from the pioneering EV maker. Sure, the larger Model X turns in some great numbers in regard to range and performance, but the interior layout lacks the versatility expected of an SUV. And don’t even get us started on the ridiculous falcon-wing doors. By comparison, the Model Y is a lot more traditional, with normal doors and rear seats that fold to give you flexibility between passengers and cargo. On top of that, it benefits from much of what makes the Model 3 so good, since it’s based on that sedan.

Unlike other carmakers, Tesla doesn’t adhere as strictly to model year changes. In the course of a year, a Tesla could gain new features and execute fixes via over-the-air-updates. Prices also fluctuate, as can the availability of certain versions. Tesla’s reputation for build quality and reliability also leaves something to be desired, and the interior’s unusual, touchscreen-reliant controls won’t be for everyone. There are other technology oddities we go into below.

In total, the Model Y remains a strong choice among electric SUVs, especially due to its excellent range and Tesla’s Supercharger network. It is still one of several choices, though, and the competition is growing stronger. The Hyundai Ioniq 5, Kia EV6 and Ford Mustang Mach-E are all excellent alternatives with much lower starting prices. What are the Model Y’s interior and in-car technology like?

The Model Y’s interior is striking for its minimal design. The centerpiece is a 15-inch touchscreen that looks more like a tablet mounted horizontally on the dash. Missing are the banks of buttons, switches and knobs found in other cars. The seats and interior panels are upholstered with “vegan” synthetic leather, and shoppers can choose between black or, at additional cost, a white interior. The material has the look and feel of real leather, but it can be stifling on hot days and sadly, cooled or ventilated seats are not offered.

The front seats are somewhat firm and flat, making them prone to some hard contact points on longer road trips, and the same holds true for the second-row seats. There is a wealth of space for both rows, as 6-footers will have more than enough headroom and legroom. The optional third-row seats are notably cramped and really only suitable for small children. Despite its limiting space, it’s still nice having those seats as an option when the carpool needs to expand.

Since the Model Y lacks physical buttons, almost all functions are controlled through the touchscreen. As a result, the number of on-screen menus and settings can be daunting, with a steep learning curve. The screen can also be distracting for the driver since you’d have to take your eyes off the road to use it. There are several voice controls that can remedy many of those problems, though. The steering wheel has only two multifunction dials that control a few features such as mirror positioning, audio and cruise control.

A navigation system is standard equipment, and it’s powered by Google. On one hand, it’s a good thing because the maps and information will be up-to-date. On the other, it means you could have limited access if you’re in an area with limited data coverage. Unfortunately, neither Apple CarPlay nor Android Auto phone integration are available, though there are some aftermarket solutions that could solve that. There is also no wired audio link to your phone, forcing you to channel the audio through a lower-quality Bluetooth connection. There are some available streaming services and games to make up for it. All of the above makes the Model Y atypical among most other cars. 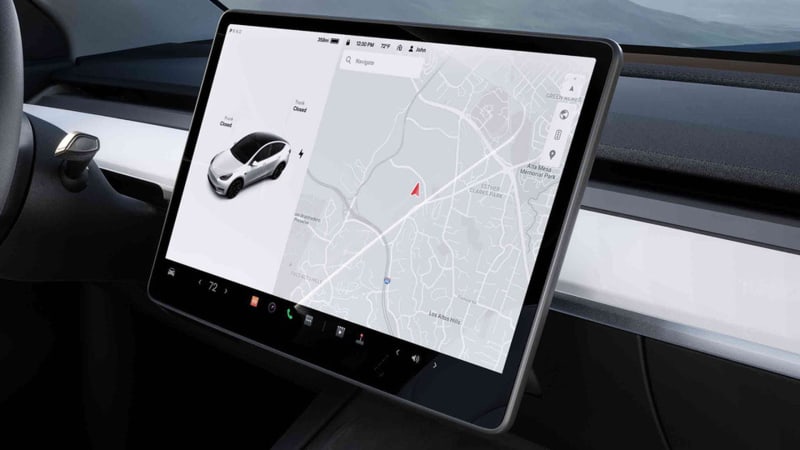 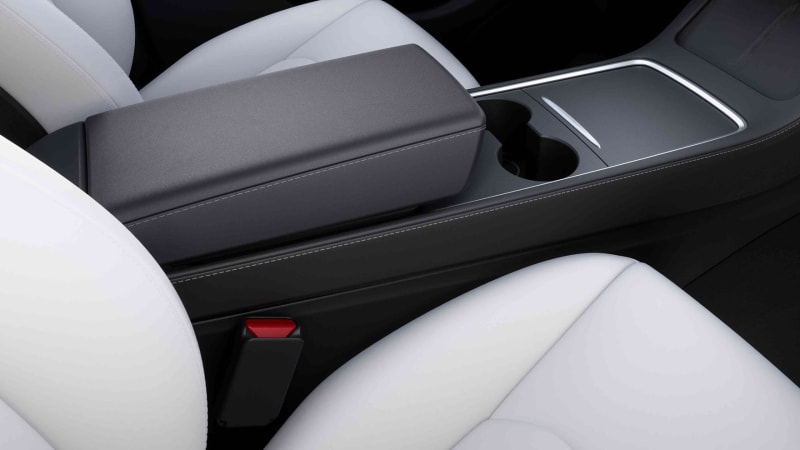 How big is the Model Y?

Those larger dimensions translate to a significant gain in interior space. Enough that the Model Y can be optioned with a third row of seats, though they are admittedly intended for very small passengers. The Model Y’s rear hatch also allows for quite a bit more cargo capacity, compared to the Model 3’s trunk.

The Model Y can accommodate up to 30.2 cubic-feet of cargo behind the second-row seats and up to 72.1 cu-ft with those seats folded. If you opt for the third-row seats, those figures drop by 3 or 4 cu-ft, but even those specs are generous for both the compact SUV class and when compared to the growing number of crossover EVs. There’s also an additional 4.1 cu-ft in the frunk (front trunk). 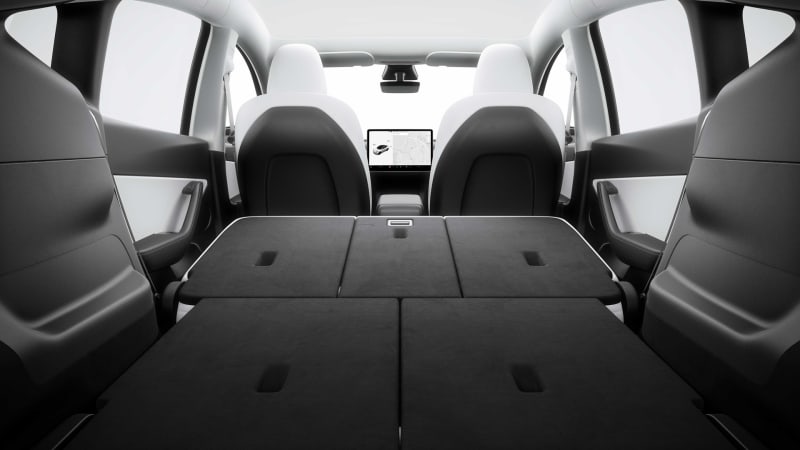 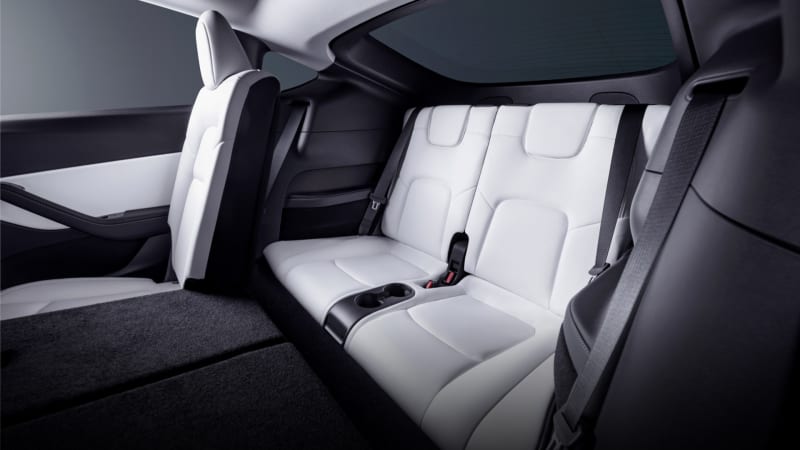 What are the Model Y’s range and performance specs?

Briefly, in 2021 there was a more affordable Model Y Standard Range available for ordering. It was listed with 244 miles of range and a 0-60 mph time of 5 seconds. That variant is no longer available for order, but rumors persist that it may return to the United States. As is the case with most EVs, the Model Y can be negatively affected by cold temperatures that reduce range and increase charge times. Owners may also see a loss of range overnight since energy is expended to keep the batteries warm. Whether it’s the Long Range or Performance, the Model Y is quicker than most drivers will ever need. Stomping the pedal to the floor, acceleration is instantaneous, terrifying and eerily quiet. Driven more conservatively, the Model Y is well-mannered and seamlessly smooth because there are no transmission gears to change. These traits are emblematic of most EVs, as is the way the Tesla slows down.

Drivers can select maximum regenerative braking to enjoy one of the many perks of EV ownership: one-pedal driving. When lifting off the accelerator, the electric motors become generators, using the car’s momentum to charge the batteries, and can bring the car to a complete stop. Most drivers will adapt very quickly to this driving style as it reduces fatigue slightly, especially in traffic. As a side benefit, it’s also more efficient and can extend your range.

With a curb weight tipping the scale past 4,400 pounds, the Model Y is on the heavy side for a car of its size, but as with every EV, the considerable battery weight is optimally concentrated in the floor. This gives the Model Y a low center of gravity and greatly improves handling. It indeed can be said the Model Y drives like a smaller vehicle, and the Performance version is even more agile thanks to a lowered suspension and upgraded brakes.

Ride quality is firmer than you might expect and tends to unsettle the Model Y on broken pavement. The Performance model’s sport suspension is even stiffer, with sharp jolts regularly transmitted right into the cabin. If comfort is a priority, you may want to look into smaller wheel options as the 21-inch wheels tend to exacerbate this problem. Since there’s no internal combustion engine, the Model Y is mostly quiet, but that makes other noises more noticeable. Road noise is ever present, and road bumps often emit low thuds, but at least wind noise is absent. In our experience, after only a few thousand miles, the Model Y’s interior panels begin to creak and squeak with annoying regularity.

What other Model Y can I read?

Back in July 2020, we got our first drive of the Model Y and found that it easily trumped the limited number of EV offerings from luxury manufacturers (Jaguar and Audi in particular). Things have changed since then, including the Model Y's specs. What is the Model Y price?

By the very nature of being a Tesla, the Model Y is different from nearly any other car. Instead of the traditional purchasing process where you drop by a dealership to purchase a vehicle and drive off, you have to order your Tesla online or from one of its stores. On the website, Tesla also displays pricing with “potential savings” deducted from the actual purchase price. These deductions include likely tax credits, other local incentives, and savings over comparable gasoline-powered vehicles. It may seem a bit devious, but it points out that with EVs, it’s helpful to imagine that you’re paying for a lot of the operating costs upfront, rather than with every visit to a gas station.

As of July 2022, the Model Y Long Range is listed at $65,990 for purchase while the Performance starts at $69,990. These prices do not include any incentives that may apply in your area (note that Tesla is no longer eligible for the $7,500 federal tax credit, unlike its competitors). The Full Self Driving option costs another $12,000, but we don’t recommend it since the system is not yet approved for use and there’s no indication of if or when it might be for the majority of those who buy it. Recently, the $6,000 Enhanced Autopilot option reappeared on the ordering site, and this system fills the middle ground between Autopilot and FSD.

Unlike other Tesla vehicles, the Model Y is not eligible for free access to the Supercharger network. Owners will have to pay when using a Supercharger, but considering the price of gasoline, how quick charging is and how dependable the network is, the cost is negligible.

What are the Model Y safety ratings and driver assistance features?

In crash tests conducted by the National Highway Traffic Safety Administration, the Model Y was awarded five-out-of-five stars across all evaluations. Similarly, it achieved the highest rating of “Good” across the board from the Insurance Institute for Highway Safety, which also named the Model Y a Top Safety Pick+ since 2021, its highest award.

A lot of noise has been made over Tesla’s automated driving systems, causing quite a bit of confusion. At least at present time, there is no legitimate self-driving system offered by any carmaker. Despite their misleading names, Tesla’s Autopilot and Full Self Driving are not autonomous driving systems. When it was offered, the basic Autopilot system combined adaptive cruise control and lane-centering steering assist to reduce driver fatigue, but the driver had to keep their hands on the wheel and be ready to take control at any moment. This is how the systems offered by rivals continue to work.

Enhanced Autopilot comes with additional features that include automatic lane changes, the ability to navigate on- and off-ramps, and the car can be summoned to the driver a short distance. Apart from Hyundai and Kia offering automatic line changes, the competition can’t match this. Then there’s the $12,000 “Full Self Driving” option. It has only been activated for a select group of beta testers, and early impressions suggest it still requires a lot more development. In 2021, the frontal radar system was dropped in favor of the camera-based Tesla Vision system. This change may be responsible for “phantom braking” issues where unexpected braking for no apparent reason was reported. This issue is still being investigated by the National Highway Traffic Safety Administration.