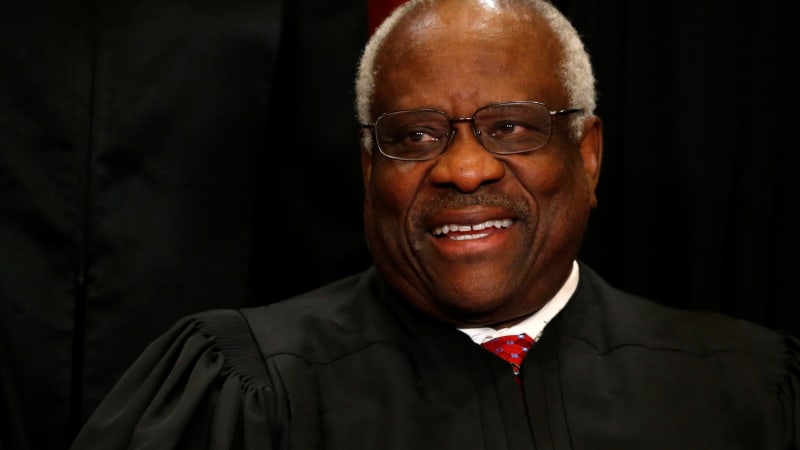 WASHINGTON — Supreme Court Justice Clarence Thomas has never been afraid to turn right when his colleagues turn left, or in any direction really as long as there’s a place to plug in his 40-foot (12-meter) refitted tour bus at the end of the day.

Thomas is the only justice with a second home on wheels. And while it’s unclear how he’s using it during the court’s break, he still might be the envy of his colleagues during this pandemic-limited summer.

Justices have canceled trips to the Czech Republic and Ireland, as well as the Rocky Mountains and the Pacific Northwest because of the coronavirus outbreak. RV travel, meanwhile, seems to fit with the national mood — a country cooped up and needing to get away but leery of being too close to strangers.

RV rental companies report big increases in their business. Kampgrounds of America, with 525 private campgrounds in the U.S. and Canada that cater to RVs, is seeing its bookings begin to rebound after a wave of cancellations in the spring as the pandemic spread.

“People are saying, ‘I got to get out of here. I still want to take a vacation this summer, something that allows me to socially distance.’ Camping just became the thing to do, and, for some people, the only thing they could do,” Michael Gast, KOA's vice president of communications said.

The 72-year-old Thomas has the KOA discount card and a bunch of others for older Americans, he said in a conversation with businessman and philanthropist David Rubinstein at the Supreme Court in 2019. “The senior citizens have looked out for themselves. You get every possible discount you could get,” he said.

He was in his early 50s when he and his wife, Ginni, got the RV bug. They’ve had their vehicle since 1999 — technically a motorcoach and not an RV, Thomas told Yale alumni in 2014. They regularly spend their summers on the road, making it to nearly two dozen states in 2018, he said last year.

In years past, they might spend the night in a Walmart parking lot if the battery had enough power.

It’s unclear whether the Thomases have hit the road this summer, after repeated inquiries from The Associated Press. In mid-July, just after the court finished its work for the summer, they were at their suburban Virginia home, according to entries on Ginni Thomas’s Facebook page.

Thomas has described the road trips as a break from “pretty rarified atmosphere” at the Supreme Court. “We get insulated from the rest of the world, if not isolated. And I kind of like that world. I like the part we fly over,” he said in the courtroom talk.

It wasn’t always so. When he was in his 40s, Thomas drove a Corvette with a “Res Ipsa,” license plate, the start of a Latin phrase meaning “the thing speaks for itself,” an important concept in negligence lawsuits.

He wasn’t much interested in seeing the country in an RV. At a reception about 25 years ago, someone told him the “best people in the country are at RV parks,” Thomas recalled in the courtroom talk. “I said, ‘Yeah, right.’”

But he changed his mind and now describes RV parks as “what the neighborhoods used to be like.”

His driving habits also changed, he said, a result of controlling the RV and the car that is often hitched to its rear.

“That’s a lot of equipment to go speeding down the highway with. I don’t speed. You have to be careful with that much,“ he said.

Reticent in the courtroom, Thomas has not been shy about sharing his experiences, allowing CBS News' “60 Minutes” to drive along in 2007.

The lifestyle also affords Thomas a measure of anonymity when he's away from Washington.

Though he is sometimes recognized, he's just as likely to be told he resembles the justice, as happened at a truck stop in south Georgia in late 2000, just after Thomas was in the majority in the Bush v. Gore case that sealed the presidential election for George W. Bush.

“As I was walking in, one of the truck drivers comes up to me and says, ‘Anybody ever tell you you look like Clarence Thomas?’ I said, ‘Yeah,’” Thomas recalled last year.

The trucker said, according to Thomas, ‘“I bet it happens all the time.’ And he just kept walking.”