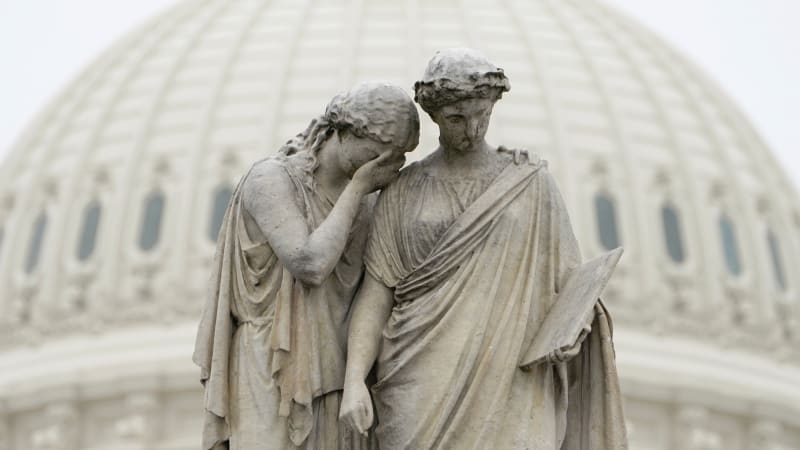 "Grief holds her covered face against the shoulder of History and weeps in mourning," part of the Peace Monument at the U.S. Capitol. Inside, lawmakers were completing a $2 trillion stimulus package to address the economic effects of the coronavirus pandemic. / Reuters

WASHINGTON/DETROIT — The $2 trillion economic rescue package before the U.S. Senate on Wednesday would send the federal government to the auto industry's rescue for the second time in a dozen years.

Automakers are fearful of being tagged as seeking a new government bailout so soon after the 2009 government-funded auto restructurings. Detroit has not sought industry-specific assistance, instead making the case that the entire economy needs urgent access to liquidity.

Republican Sen. Pat Toomey said Wednesday the deal, which he called "the biggest government intervention in the economy in the history of the world," sets aside $454 billion to make loans or loan guarantees for companies across all sectors, as well as states.

It was more likely the money will be used to leverage even more funds in loans from the Federal Reserve, said Toomey, who told reporters on a conference call that the Treasury would then be able to make loans, purchase loans or purchase corporate debt, which could be a major boost for automakers.

Industry officials, especially at General Motors, were eager to avoid the appearance of a federal bailout. Sales suffered and the No. 1 U.S. automaker was nicknamed "Government Motors" after its $50 billion bailout in 2009.

The United Auto Workers union and the Detroit Three automakers recently discussed sending a letter to Capitol Hill explaining why the industry needed a source of liquidity, but GM ultimately declined to sign the letter and it was not sent, people familiar with the matter said.

The final stimulus package contained no benefits targeted specifically at automakers. By contrast, U.S. airlines are set to receive $25 billion for payroll costs in cash grants that do not need to be paid back.

On Wednesday, S&P downgraded Ford to "junk" status, while the automaker confirmed it had drawn down its $15.4 billion credit facilities. S&P said Ford was at risk of another downgrade.

Moody's warned it was considering cutting GM to junk as it faces sharply lower demand. "A severe disruption in automotive demand due to the coronavirus, combined with the possibility of a follow-on economic recession, will place considerable pressure on GM's cash flow and credit metrics," Moody's said.

Automakers do not rule out seeking additional help if sales or production remain frozen.

But auto and parts makers stand to benefit from other provisions, including a 50% employee retention tax credit and suspension of the employer share of payroll taxes — the taxes that fund Social Security and Medicare — for two years. GM and its employees paid more than $3.15 billion in state, local and payroll taxes in the United States in 2018.

GM, Ford and Fiat Chrysler Automobiles NV (FCA) have halted North American vehicle production until at least March 30, and people briefed on the matter said they plan to extend that into April.

Automakers will get some tax benefits, but the government loans are the biggest help, sources said. Aid will also be available to auto dealers and thousands of smaller suppliers. Funds for U.S. consumers also could stimulate new car sales again once stay-at-home orders lift.

The Detroit auto companies are in far better financial health than they were ahead of the 2008-2009 crisis. Balance sheets at all three companies are healthier, and GM and Ford moved this month to build cash reserves further by drawing down a combined total of more than $30 billion from credit lines.

The global auto industry is bracing for worldwide sales to plummet more than 12% from 2019, worse than the two-year peak-to-trough decline of 8% during the global recession in 2008-2009, research firm IHS Markit predicted on Wednesday.

The Senate package could help badly stressed, smaller suppliers the automakers rely on for parts.

"I'm working with four middle-market suppliers — $150 million in revenue to about $400 million in revenue — and most of these companies are not all that well capitalized," Steve Wybo, auto group practice leader for restructuring consultancy Conway MacKenzie, told Reuters.

RoMan Manufacturing Inc, based in Grand Rapids, Michigan, is a family-owned manufacturer of transformers and glass molding equipment for automakers and other industries. Co-owner Bob Roth said its balance sheet is "rock solid," but he is clamping down on spending as he sees other manufacturers pleading for relief from bank loans.

Normally, he said, "we pay all bills on 10th and 25th. Now we're moving to one payment cycle a month." He told members of the families that own the company "we won't pay a quarterly dividend for a while."