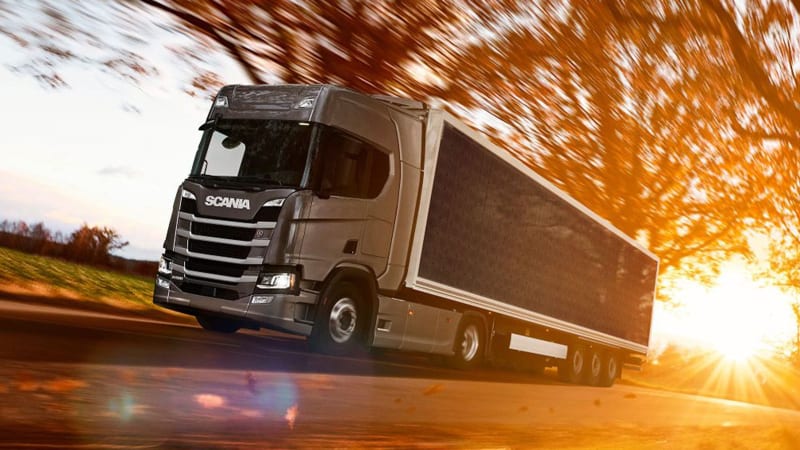 Automakers have been playing with solar panels on cars for decades now. In sunny places, on ultra-lightweight, aerodynamic cars covered in them, solar cells can provide propulsion for long periods of time. But on production cars that have safety, comfort and styling considerations, there are limits to what solar panels can do. The solar roof on the Hyundai Sonata Hybrid, for example, can only provide enough energy for a couple miles after a few hours of sun exposure. But what if you could have oodles and oodles of solar panels?

That's the idea behind the semi-truck trailer that's being tested by Scania, the European truck manufacturer owned by Volkswagen Group. The trailer is 59 feet long and has solar panels along both sides and the roof. In total, there are 1,507 square feet of solar panels covering the trailer.

Testing of the trailer is being done with Swedish trucking company Ernst Express, which will use it with a plug-in hybrid Scania semi-tractor. While Scania didn't give an estimate for how many miles of electric range could be added with the trailer, it does estimate an improvement in fuel economy by about 5-10%, and a total energy generation of 14,000 kWh over the course of a year. That may not sound like much, but this is the estimate for Sweden, a country that's far north and gets less sun than much of the rest of the world. Scania estimates that if the truck and trailer were used in a sunny country such as Spain, the improvement could double.

There's potential for more than just fuel economy improvements. Scania and the companies it's partnering with for testing and solar panel development say the trailer could provide power to the electrical grid when it and the truck aren't in use. We could see such trailers being handy as portable power generators for areas that might be suffering power outages due to storms and other natural disasters.