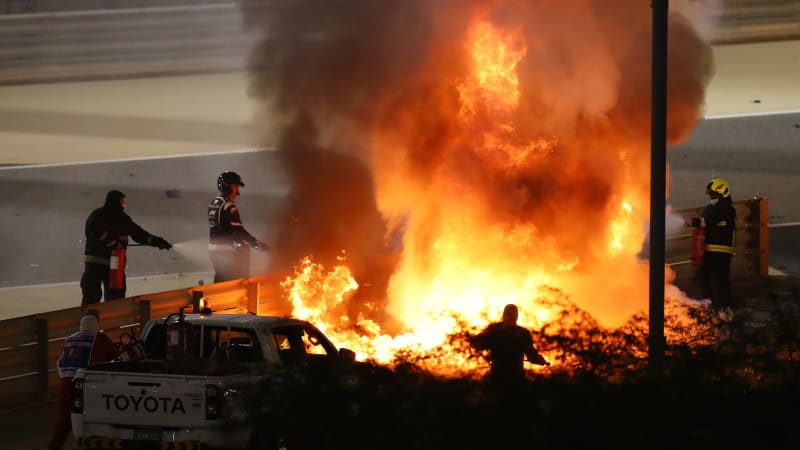 LONDON — Formula One's governing body revealed on Friday that Romain Grosjean's Haas car crashed into barriers at 192 kph (119 mph) and with a peak force of 67G before bursting into flames at last year's Bahrain Grand Prix.

The car split in two, with the front half penetrating the barrier before catching fire at the start of the Nov. 29 race.

The Frenchman Grosjean, 34, whose left foot was initially trapped, said afterwards that he thought he was going to die but willed himself out of the wreckage for the sake of his children.

The governing FIA's report into the accident said the fuel tank inspection hatch on the left side of the chassis was dislodged and the engine fuel supply connection was torn from the fuel tank safety bladder.

The race was red-flagged 5.5 seconds after the impact, and the medical car arrived within 11 seconds. Grosjean managed to extricate himself after 27 seconds, suffering burns to his hands.

"Important learnings have been drawn from these investigations that will drive our continuous mission to improve safety in Formula One and global motor sport," said FIA President Jean Todt.

The FIA said it was now working in a number of areas to improve safety, including a design review of safety fuel bladder installations and inspection hatches in all single-seater categories.

Work will also be done to improve the heat resistance of gloves and research conducted into new types of crash barriers.