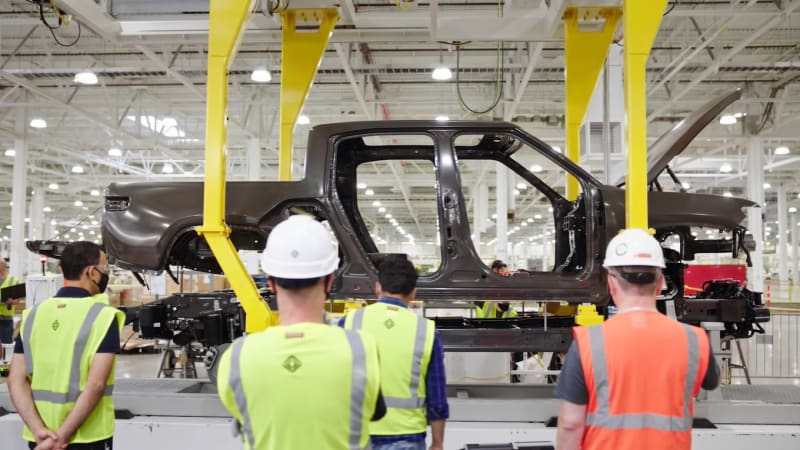 Over half a dozen carmakers have entered the race to bring a modern-day electric pickup to the market. Rivian took a significant step towards the finish line when it started building pre-production prototypes of the R1T.

Published on YouTube, the minute-long video shows partially assembled trucks making their way down an assembly line installed in a clean, well-lit factory. While robots are involved in most steps of the production process, it appears that humans play a significant role in building the R1T. Employees are seen checking the panel gaps, for example, which suggests the Amazon- and Ford-funded firm takes build quality seriously.

It doesn't look like the R1T has changed significantly since it made its debut at the 2018 Los Angeles Auto Show. The biggest modifications we see are a redesigned rear bumper, which likely increases the truck's departure angle, and an emblem on the left side of the tailgate. Even the flush-mounted door handles remain.

Rivian noted it will put the preproduction prototypes it's building through their paces in the coming months. Every part of the truck is new, from the architecture to the window switches, so it needs to ensure the components work as-designed, even in harsh environments. It's marketing the R1T as a rugged, do-it-all off-roader, after all.

Building a batch of preproduction prototypes is par for the course in the auto industry, but Rivian's achievement remains notable because it completely remodeled its factory, and the work was interrupted by the ongoing coronavirus pandemic, which forced it to shut down all of its facilities earlier in 2020. It had originally planned to deliver the first R1Ts in December 2020, but it announced deliveries won't start until June 2021. Motorists who prefer the R1S, an electric SUV built on the same platform as the R1T, will need to wait until August 2021.

Rivian's factory in Normal, Illinois, traces its roots to a joint venture between Chrysler and Mitsubishi named Diamond-Star Motors (DSM). It was formed in 1985, when Chrysler owned a small stake in Mitsubishi, as a way to circumvent quotas placed on the number of Japanese cars that could be imported into the United States.

The first cars built in Normal were the Eagle Talon, the Plymouth Laser, and the original Mitsubishi Eclipse. Mitsubishi purchased Chrysler's stake in DSM in 1991, and it continued building cars in Normal (including the Dodge Stratus Coupe and the Outlander Sport) until it closed the facility in 2015. Rivian saved it in 2017.