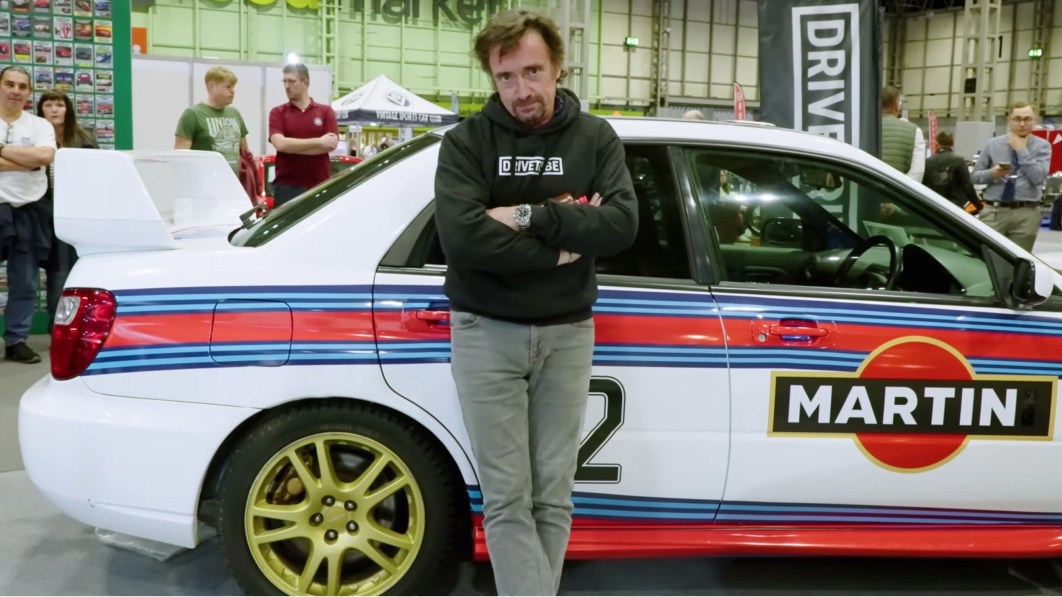 Richard Hammond has taken home another one of his epic road trip cars. It's the 2003 Subaru Impreza WRX STI V-Limited from The Grand Tour's latest episode, "A Scandi Flick." In it, Hammond and his co-stars drove rally-inspired all-wheel-drive sports sedans across Scandinavia above the Arctic Circle. Hammond apparently loved the car so much, he arranged to bring it home and add it to his already impressive stable.

Previously, Hammond adopted a 1962 Opel Kadett with which he crossed Botswana on an episode of his former show, Top Gear. He is known to have owned a variety of  modern luxury sports cars including a Porsche 911 GT3 and Lamborghini Gallardo LP560-4 Spyder. He also has owned a nice cross-section of British automotive history, including a Land Rover Defender 110, Ford Sierra Cosworth, Jaguar E-Type, Morgan Plus Six, 1934 Lagonda and a Bentley S2. A known American muscle car fan, he's also owned cars such as 1968 Mustang, 1969 Dodge Charger and a modern Challenger SRT8.

However, Hammond said in his video that if he was forced to give up all but three cars, he'd whittle his collection down to the 911, Land Rover and the Subie. And it's no ordinary WRX STI. The V-Limited was built to to commemorate Petter Solberg's 2003 WRC championship and is limited to just 555 units. As such, it boasts a few parts not found on standard STIs, including a roof ventilator, front lip spoiler, aluminum shift knob, 17-inch gold BBS wheels, a blue interior and factory four-way adjustable dampers that come with a 0.6-inch drop in ride height.

Hammond isn't quite sure what he plans to do with the car yet. He could go full tuner on it, but also considers returning the rare variant back to stock. The "Martin" wrap was done as a joke for the show but doesn't look quite at home on a Subaru. The V-Limited only came in Subaru's trademark WR Blue, and it's still that color underneath. If the Hamster decides to go stock, he would be wise to find (or make) some Subaru World Rally Team foglamp covers, as those would have been standard equipment rather than the STI ones.

As for the other cars that went along with the Subaru on the Arctic adventure, James May's Mitsubishi Lancer Evolution VIII was damaged so badly in a crash that the car is likely to be scrapped. Jeremy Clarkson's Audi RS4 isn't for sale, either. Another video reveals that Amazon, which produces The Grand Tour, is not about to take on any liability by selling an abused car to the public.

Hammond was so enamored with the Opel that he gave it a name, Oliver. As far as we know the Subaru doesn't have one. Yet.