The Mercedes-Benz EQ family continues to grow – both in size and number – with a utility version of the EQS sedan. Called, unimaginatively, the EQS SUV, this new all-electric model will be the first SUV on Mercedes’ new EPA-2 platform. EPA-2 was designed for Mercedes’ electric vehicles and has so far brought us the EQS luxury sedan and the upcoming EQE sedan. An EQE SUV is also in the works.

Recently, Mercedes provided Autoblog with a preview of the new model decked out with an AMG line exterior package in Alpine Grey. Strong family ties between these platform-mates mean that parts of the EQS SUV should look familiar to anyone who’s seen the EQS sedan. The expected “one-bow design” has been stretched and heightened to accommodate the SUV shape, with the A pillar pushed forward and D pillar thickened. The standard panoramic sunroof looks black, helping to make the SUV look lower when painted in a light exterior color. The EQS SUV also looks smaller than it is thanks to the flexibility offered by the platform and the different proportions used. The fascia remains authoritatively aerodynamic even if the overall efficiency numbers won’t be as good as the ultra-slippery EQS. Two-tone running boards on each side and a rear diffuser extend the flat undercarriage for improved aerodynamics.

The EQS SUV will have an interior that’s uncannily similar to the EQS sedan, especially the instrument panel. The EQS SUV can unsurprisingly be equipped with a version of the Hyperscreen, which uses three screens covered by a single, 56-inch curved glass surface. Regulations and technological advances have come together in the passenger side of the system, since it is now legal to have the passenger screen show moving images while the car is in motion. Aesthetically, Mercedes designers didn’t want to put a lenticular cover on the passenger screen, so they decided to use the precise eye tracking software used by the driver alertness warning system to determine if the driver is looking over at the moving images. If they are, the video pauses until the driver looks back to the road ahead.

Acres of entertainment are just one of many shared traits between the two. The wheelbase for both is 126.4 inches, even though the SUV is more than 7.8 inches higher than the sedan to help with packaging seats for as many as seven people. The SUV’s rear taillights contain the same helix spiral used in the EQS and the EQE. Like the EQS, the EQS SUV will also offer rear wheels that can turn by as much as 10 degrees, which is considerably more the 3- to 5-degree norm. This feature will be standard in the United States and reduces the turning radius from 39 to 36 feet. Air suspension and active safety technologies will also be included.

The EQS SUV we got to peek at has prototype doors with an electronic locking mechanism that can prop them open at any angle. Mercedes representatives said this will be a feature in future models, but the first EQS SUVs will have the standard notches in their door hinges. 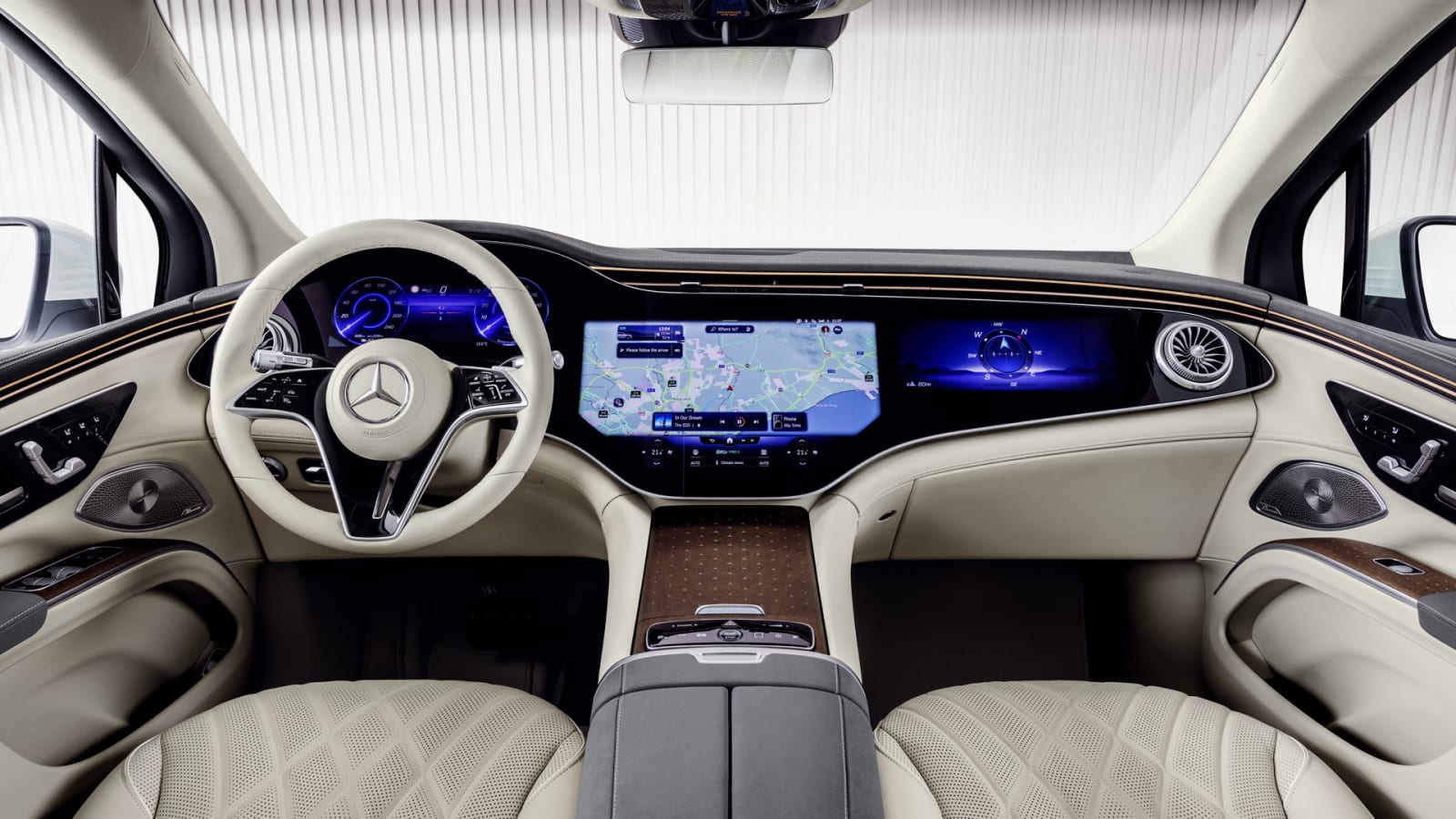 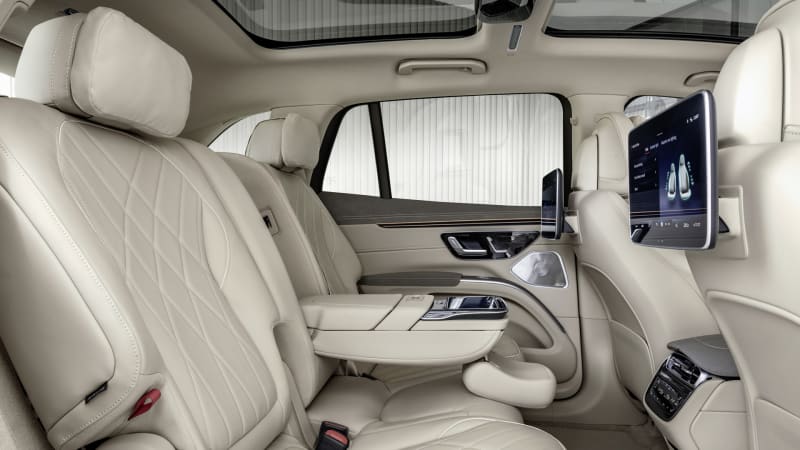 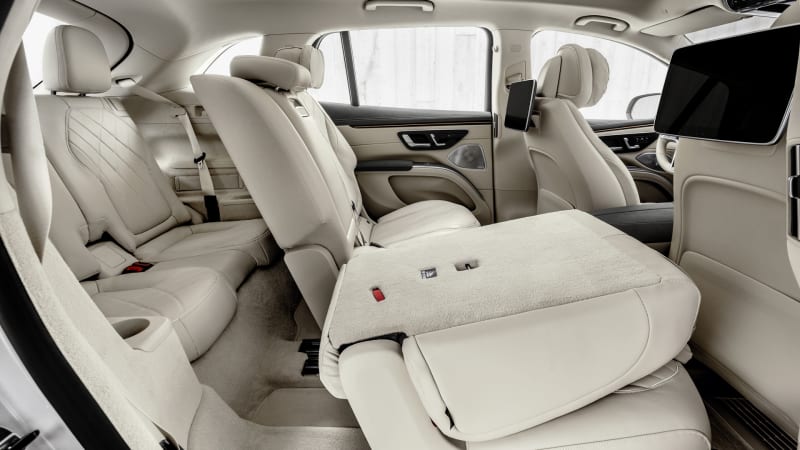 Two versions of the EQS SUV will be available when it debuts: the EQS 450+ SUV and the EQS 580 4MATIC SUV. The standard EQS 450+ SUV will have an electric motor on the rear axle that produces 355 horsepower and 419 pound-feet of torque, while the 4MATIC versions put motors on each axle for a total output of 536 hp and 633 lb-ft.

Mercedes says the 107.8-kWh battery pack (that’s usable energy, not gross) should be enough to give the EQS SUV an expected range of 373 miles on Europe’s WLTP test cycle. Official EPA numbers for the U.S. will be available later this year, but at least we know that DC fast charging up to 200-kW will be possible at the right charging stations, and the EQS SUV will come with two years of free charging at Electrify America stations thanks to Mercedes me Charge. 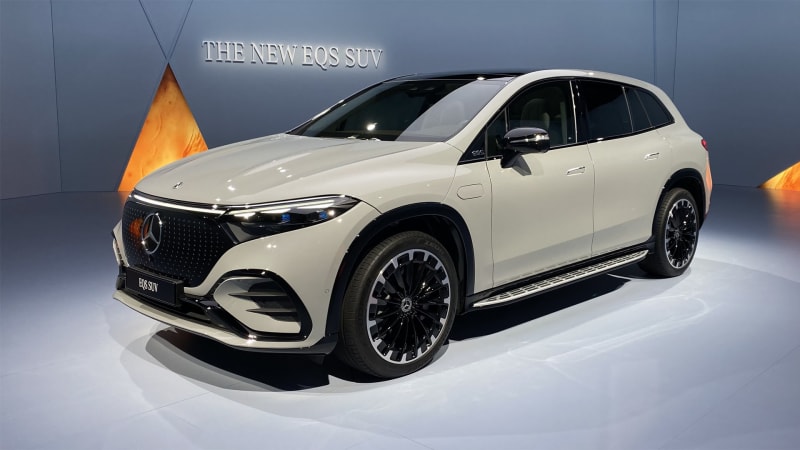 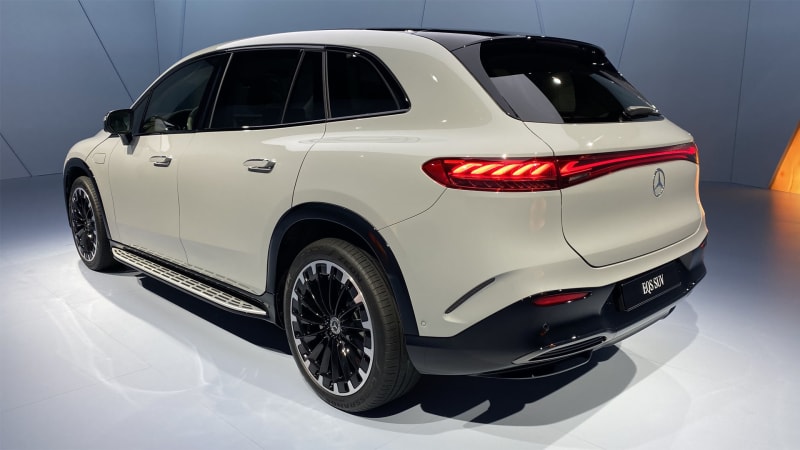 The EQS SUV is a larger EV designed with Americans in mind. So much so that it will go on sale in the U.S. before any other market. The all-electric SUV will be built at the Mercedes plant Tuscaloosa, Alabama, in a "completely CO2-neutral way” starting this summer, the company said. The EQS SUV goes on sale in the fall.

As for the name, Mercedes CEO Ola Källenius said back in December during the EQS press launch that the decision to call it EQS SUV was to keep things clear and simple.

“Could we have called it EQGLS? …” he asked rhetorically, slowly working his way through each letter of the ponderous alternative nomenclature before abandoning the effort. “I guess. But we thought this was easier for people to understand.”