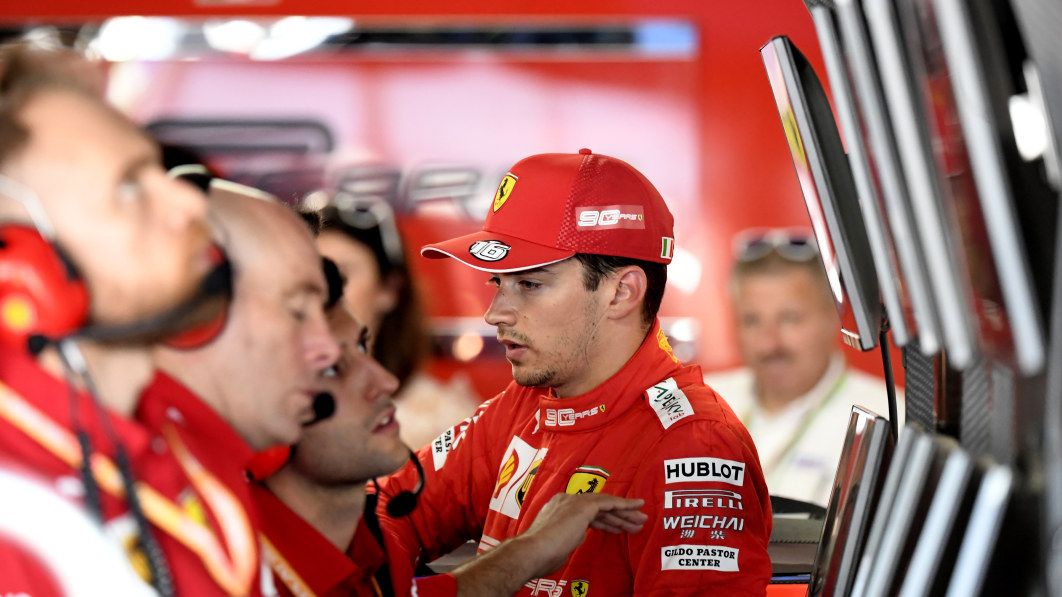 Charles Leclerc really needed the Formula One break to clear his mind. His season had started so promisingly, then his big lead over title rival Max Verstappen mushroomed into a huge deficit.

Leclerc won two of the first three races for Ferrari as Verstappen's Red Bull had reliability woes. But a staggering 126-point swing in the next 10 races gave Verstappen an impregnable-looking 80-point lead heading into Sunday's Belgian Grand Prix, where the season resumes.

It didn't start well for Leclerc on Friday. He was sent to the back of the grid for Sunday’s race because of multiple engine-part changes. But Verstappen was among the other five drivers receiving the same punishment.

The mental strain built up before the summer break for Leclerc as he was confronted with confusing team calls, while also getting furious at some of his own driving errors. The break came at an opportune time for a totally drained Leclerc.

“Yes, I needed it. The first part of the season has been full of highs or lows. There’s lots of accumulation of emotions which leads to being tired,” he said. “I used these weeks in the best way possible with my family, my friends. It was just great.”

There was a lot of mental clutter to clear.

Leclerc saw two nailed-on wins disappear — at the Monaco GP and the British GP — after team calls dropped him down from a dominant position into fourth place.

At the Hungarian GP before the midseason break, Verstappen qualified a season-worst 10th yet somehow won for a season-leading eighth victory. Another confusing tire strategy call cost Leclerc when he was in a dominant position and he finished a disappointing sixth — one week after beating himself up for crashing when leading the French GP.

But Leclerc, who leads with seven pole positions this season, has unshakable belief.

“I still believe in the championship of course,” he said. “It’s going to be a very difficult challenge but I will believe in it until the very end.”

Unless Verstappen is dogged by the reliability issues that led to two DNFs in the first three races, Leclerc pretty much has to beat him in every race left. There are nine races go, including this weekend's GP.

Seemingly impossible runs have been done before. Back in 2013, Sebastian Vettel won nine straight races after the break to win his fourth straight title.

“It’s easier to say than to do it, but I’ll give my best,” said Leclerc, who won his first race at the same Spa-Francorchamps track in 2019.

Spa, which is Verstappen's favorite track, is close to Leclerc's heart. His victory came the day after F2 driver Anthoine Hubert died after a crash on the track.

“It is a very special track for me. I think for every driver the first victory is very special," Leclerc said. "I got it here in very strange conditions, with what happened on the Saturday with Anthoine.”

Spa is one of the original seven circuits from the inaugural world championship in 1950. The 7-kilometer (4.3-mile) circuit nestled in the Ardennes forest is F1's longest.

It is also good for overtaking, thus making it one of the best circuits to incur engine penalties given that drivers can claw their way back through the field. That's significant with Leclerc and Verstappen being sent to the back of the grid.

Their starting positions on the grid will be determined by Saturday’s qualifying.

Lewis Hamilton spent his break in Africa, a trip he'd planned since February.

“It’s the place I wanted to go more than anywhere and I got to travel in lots of different places," Hamilton said. "It was incredible how welcoming everyone was and it was a very grounding experience to see the incredible landscape.”

“Just in like a house made of sticks, you know, literally twigs, and no shoes, no socks, and going about their daily lives. Not with social media, and not with the stuff that we all have in the western world,” he said. “It didn’t seem like they took anything for granted, which was really quite beautiful to see.”

Hamilton owns a record 103 F1 wins but none this season. However, the British driver has five straight podiums and believes Mercedes is very close to a win.

“I do, definitely. Of course we’ve been improving, we’ve had this consistency (in) the recent races and great progress,” he said. “The car is becoming more of a racing car, which is not particularly what it was the beginning of the year.”

In Hungary, Mercedes placed both its cars on the podium for the second straight race. Hamilton carved his way from seventh to a second-place finish, and pole-sitter George Russell was third.

“The best showing that we’ve had so far. That was a huge boost,” Hamilton said. “I believe that we can close the gap.”

The remaining races of the season could prove to be the last of Daniel Ricciardo's F1 career, and he intends to make the most of them.

The Australian driver will split with McLaren at the end of the year after the team bought the final year of his contract. He still wants to race in F1 but that might not happen since his options are limited for next season.

“After all this, there’s kind of a bit of a weight off the shoulders. It’s just to go out there and just race, go have fun," he said. “Although the team has made this decision, the team is behind me to make me get the most out of the last nine races and to finish on a high ... try and get another Monza moment.”

Ricciardo's win at the Italian GP last September was the eighth of his career, and a rare high with McLaren.

Ferrari led the first practice with Carlos Sainz Jr. ahead of Leclerc, and Verstappen in third.

The session was red-flagged for about 10 minutes after the engine on Kevin Magnussen’s Haas cut out on track. His car was lifted off the track by a crane.

A second practice was scheduled for later Friday.