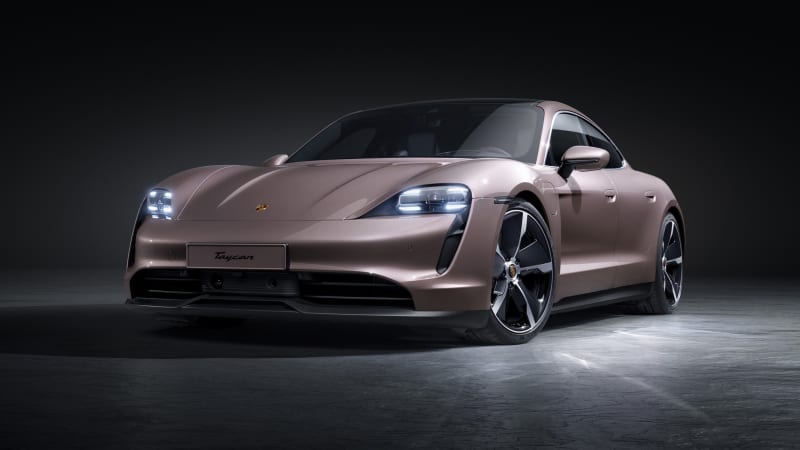 Well, that didn't take long. As we predicted just this morning when the image of a new, fourth variant of the Porsche Taycan was teased out, Porsche has announced that the EV is getting a rear-wheel-drive version that is considerably more affordable.

Joining the Taycan 4S, Turbo and Turbo S is the entry-level model that will simply be called Taycan. Done and done: Porsche says it's already on sale in the United States. Once you've ordered, you'll be able to track the car's progress from build to delivery via smartphone. It will arrive soon, in early spring.

Now, what we didn't predict this morning was the price, which we figured would be under $100,000. Not even close. The simpler Taycan will start at $81,250 when you count the $1,350 destination fee. That's a considerable number considering that the next step up, the Taycan 4S, lists for $105,150 including delivery, while the top-shelf Taycan Turbo S starts at $186,350.

And of course the just-call-me Taycan still qualifies for the $7,500 federal EV tax credit, plus whatever state EV incentives you might qualify for in your locale.

In addition to a lighter price, this Taycan weighs in about 200 pounds less than its companions, thanks to losing the hardware for driving the front wheels.

The Taycan's not-greasy bits will be identical to the 4S in the back — they'll share the same rear power unit and battery setup. And it will have the same two-speed transaxle as the rest of the Taycan lineup. Brakes and the standard 19-inch wheels are also similar, though the calipers will be painted black on the Taycan and red on the 4S, and the base model's wheels will be silver rather than the 4S' polished wheels with black accents. The regenerative braking is the same.

You'll have the choice of two battery pack sizes: the standard Performance Battery, at 79.2 kWh, with a charge rate of up to 225 kW, or the Performance Battery Plus, at 93.4 kWh and the ability to charge at 270 kW, in preparation for a future in which chargers can do such a thing. (The latest V3 Supercharger from Tesla peaks out at 250 kW.) Also, the bigger battery will gain you back 170 of those pounds. Porsche says either battery pack can be charged from a 5% level to 80% in 22.5 minutes, if the conditions of car, temperature and DC fast charger are ideal.

Though it may cost considerably less than the other Taycans, Stuttgart points out that it is still the strongest-performing base model of a vehicle Porsche has ever made. The Performance Battery can produce up to 402 horsepower and 254 pound-feet of torque from its single rear motor. The Performance Battery Plus boosts output to bursts of 469 hp and 263 lb-ft of torque, an increase seemingly offset by the 170-pound weight gain between the batteries, as Porsche says either option will do 0-to-60 mph in the same 5.1 seconds. They also share the same top speed of 143 mph. The larger pack gets the Taycan through a quarter-mile two-tenths quicker, at 13.5 seconds.

Brake upgrades and 20- or 21-inch wheels are still options, as is adaptive air suspension. Porsche Active Suspension Management is standard. The infotainment features available on all the other Taycans are standard here, as are over-the-air updates and three years of Electrify America charging privileges. And of course there are loads of options and colors to choose from.

In European WLTP testing, the Taycan got 267 miles of range from the smaller battery, and 300 miles from the bigger one. EPA mileage results aren't out yet, but based on those WLTP numbers, we figure a lighter Taycan spinning one fewer motor will come out considerably higher than the Taycan 4S' EPA rating of 203 miles. (And even that rating vastly understates the mileage we've achieved in real-world use.)