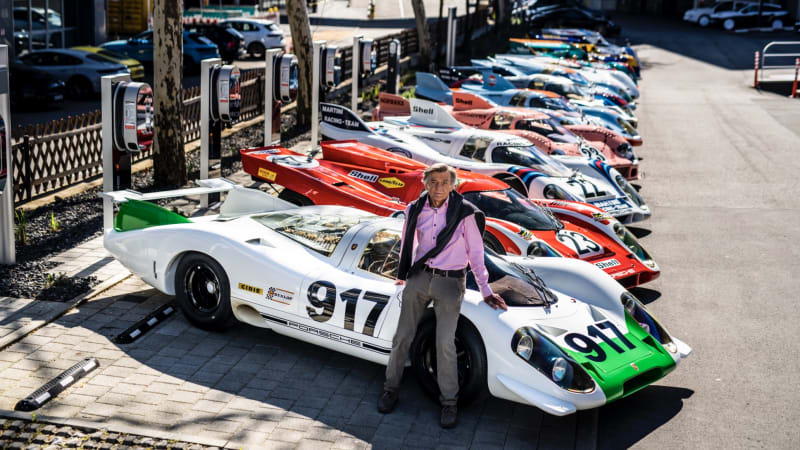 Hans Mezger, who developed numerous Porsche engines and race cars over a 37-year tenure with the Stuttgart automaker, has passed away at 90 years old. You might not be familiar with his name, but much of the world is familiar with is work. The carmaker's lengthy statement on Mezger's passing includes the line, "Porsche owes him not only the Porsche 911's air-cooled, six-cylinder boxer engine but also the overall construction of the 917 and its twelve-cylinder engine as well as his creation of the TAG Turbo Formula One engine." If Mezger had only done that much, he'd be worthy of canonization in the auto engineering ranks. But the details of resume include so much more.

Mezger graduated from what is now the University of Stuttgart in 1956 with a reputation that earned job offers from 28 companies. Porsche, however, wasn't one of them. Having taken an interest in the Porsche Type 356A, Mezger applied to the automaker and was hired, being given a job developing diesel engines for Porsche tractors. The world needs to thank the unknown supervisor who heeded Mezger's request to work on sports cars, and who put Mezger in the calculations department working on valvetrains. Four years later he joined Porsche's Formula 1 project, helping with the 1.5-liter eight-cylinder in the Type 753 and the F1-race-winning Type 804 that Dan Gurney drove to victory in the 1962 Dutch Grand Prix.

When the F1 project ended in 1962, he began working on the 2.0-liter flat-six powerplant that would become known as "the Mezger engine" and enter service with the 901 that a copyright dispute turned into the 911. In 1965, he took over as head race car design, serving up the 910, 907, and 908, then acting as Ferdinand Piëch's go-to during development of the legendary 917 — Mezger led overall chassis construction and the design of the flat-12. Somehow, on the side, he conjured up the 2.0-liter flat-four that went into the 914 road car and even an engine for Harley-Davidson.

After winning Le Mans and the World Sportscar Championship two years in a row in 1970 and 1971, Mezger helmed a team that slapped two turbochargers on the 917's engine to create the 917/10 and 917/30 Can-Am entries. What he learned from that experience would lead to the 1974 Porsche 911 RSR 2.4, and then the 911 Turbo. The forced-induction trail pointed to the blueprint for engines that would power the 934, 935 "Moby Dick" an d 936; those motors refined into the 2.65-liter flat-six for the ridiculously successful 956 Group C racer and the 3.0-liter in the even more successful 962. That engine would return to the road car world as the basis for the unit in the eighties poster child 959.

Not long after McLaren's backers chose Ron Dennis to restore the F1 team's fortunes, Dennis chose Porsche to build an engine for his MP4/2. Mezger led development of the 1.5-liter TAG-branded V6 that clocked 25 victories, two Constructor's Championships, and three Driver's Championships with Niki Lauda and Alain Prost from 1984 to 1987.

In water-cooled form, the Mezger engine carried the 911 GT1 to another Le Mans victory in 1997 before returning to the streets as the basis for the units in the 996 and 997. The evolution of the Mezger engine would continue until the last yowl was heard in the 911 GT3 RS 4.0, but the engineer did help Singer Design hone a motor for the million-dollar restomods coming out of Southern California.

Mezger never left the Porsche family, even after retirement, was generous with his time and experience, and was regarded by all the media who spent time with him as an endearing guy. Hans Mezger helped enrich our auto enthusiast world in ways we still write about constantly, and we send our condolences to the Mezger family.