Odds are on Bentley Mulsanne replacement to be a flagship SUV 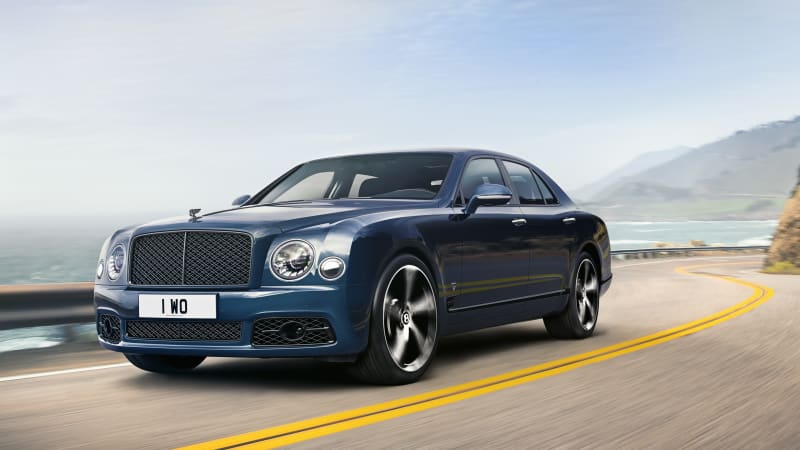 Volkswagen Group brand Porsche sells SUVs so that it can afford to pour money into its segment-defining sports cars. For fellow VW Group brand Bentley, that math doesn't work; Porsche sold around 280,000 cars last year, more than 190,000 of them the Cayenne and Macan, compared to Bentley's total sales of 11,006. The English maker, recently recovered from trying times, must therefore be especially choosy about apportioning resources when deciding what to build. When the company looked at the prospects for the Mulsanne, Bentley realized that developing a four-door sedan replacement wouldn't pay off, so designers fashioned the new Flying Spur into a kind of Mulsanne Lite. If a new model from Crewe ascends into the $300K-plus arena, odds are it will be a crossover. In comments to various outlets over the past few weeks, including Top Gear, Car, and Car and Driver, Bentley CEO Adrian Hallmark didn't explicitly admit the arrival of a big-money crossover. However, he said almost everything one could say without admitting it.

His comments were previewed last year by those of Werner Tietz, the Bentley board member for engineering. On the subject of updating the automaker's lineup, Tietz told Autocar Bentley's goal is to sell to new customers, and for that, "There is some potential when you look at SUVs too, especially around a car larger than the Bentayga if you consider its value to the Chinese and American markets. So, yes, that is one opportunity we are exploring."

Five years ago, talk about a Bentayga variant centered on a sleeker coupe style, not something bigger and badder, but much has happened since then. Hallmark explained that the market for mid-six-figure big sedans has dropped to 1,000 sales worldwide, chopped up between the Mulsanne and Rolls-Royce Phantom. Roughly 90% of Mulsanne sales are to under-40s in China and over-60s in the U.S. While "it's a great business ... it's a shrinking business" because aging Mulsanne buyers in the U.S. don't want to drop another half million dollars on a daily driver, opting for a Flying Spur or Bentayga instead. As for the Chinese market, the CEO confessed to Car, "[If] we did a — not to give you the answer — if we did a longer wheelbase Bentayga, every single one of those Mulsanne customers in China… would take that instead."

The Bentayga soaks up almost half of Bentley sales. So now, without a true competitor to the Phantom or the Cullinan — the Bentayga starts at anywhere from $160,000 to $240,000, the Cullinan at $325,000 — it's understandable when Hallmark tells Car, "We are not fulfilling the potential of the brand where we are," and, "We'd love to make an even more luxurious, even bigger Bentayga. Watch this space." He followed that up by telling C/D, "Our ambition is to fill that price space for sure."

The Mulsanne isn't the only darling Bentley is sending to the executioner. With the demise of the sedan after the 30 examples of the Mulsanne 6.75 Final Edition (pictured) are sold, so too goes the 6.7-liter twin-turbo pushrod V8 that's been a Bentley staple for 60 years. Right behind it is the 6.0-liter twin-turbo W12 that helped make the Continental GT the icon it is. Hallmark revealed to C/D, "For 100 years we have tried to make engines bigger and more powerful. For the next 10 years we're going to try and make them disappear." Excuse us while we pour some Hendrick's gin out for three fallen heroes.

The engines won't go away completely yet. The V8's still on the menu, and soon come hybrid versions of all Bentley models, expected to follow the Bentayga Hybrid's lead of using the Porsche-sourced, 3.0-liter turbocharged V6 with an electric motor. The first Bentley EV is thought to arrive in 2026 bearing looks that design director Stefan Sielaff called "a very modern step forward."