No, it's not your imagination. Destination costs are skyrocketing

There's a solid reason why Autoblog always lists sticker prices with the automaker-imposed destination charge tacked on: every buyer has to pay the fee, and it's not negotiable. And it turns out we're not the only ones who have noticed an alarming trend of ever-increasing fees being imposed on new car buyers. Consumer Reports compiled data on the rising destination or shipping fees that automakers charge customers and found that they "increased more than 2.5 times the rate of inflation" between 2011 and 2020.

We've especially noticed that destination charges for Stellantis (formerly Fiat Chrysler Automobiles) have skyrocketed in recent years. Most Chrysler, Dodge and Jeep products carry a $1,495 destination fee, regardless of where they are assembled. A Jeep Wrangler built in Ohio has the same destination fee as a Jeep Renegade built in Italy. Ram trucks are even higher at $1,695. Ford, too, asks that much for popular products like the Bronco Sport and F-150. It would make sense that vehicles shipped from Europe or Japan would naturally have higher destination charges, but that isn't usually the case. 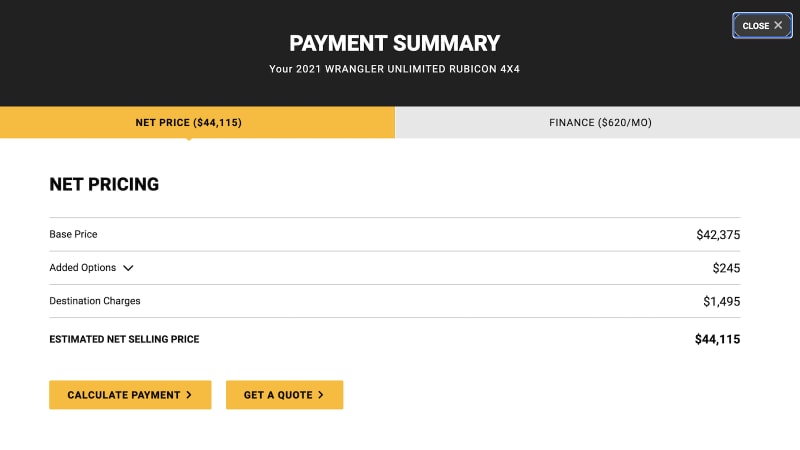 At least Stellantis brands make it relatively easy to figure out destination fees. When using one of its brand's online build tools, a net price popup clearly defines destination charges after tallying up the base price and added options. By contrast, Mercedes-Benz makes figuring out actual shipping and destination charges an exercise in futility. Head over to the 'Build Your Own' section at mbusa.com and you'll find disclaimers stating that prices listed exclude "transportation and handling charges, destination charges" and more, but you won't find the amounts of those additional fees. Thankfully, more brands are like Stellantis than Mercedes, but the "fine print" nature of them is a constant.

There are a lot of issues with destination fees, not the least of which is the fact that the actual charges are completely opaque to consumers. While nobody argues that there aren't costs associated with transporting completed cars from factories to dealerships, the fact of the matter is that there isn't an automaker doing business in America that offers anything resembling an actual breakdown of those costs.

A lot of intriguing information was uncovered by Consumer Reports, along with statements from a couple of automakers. Click here to read the full story.