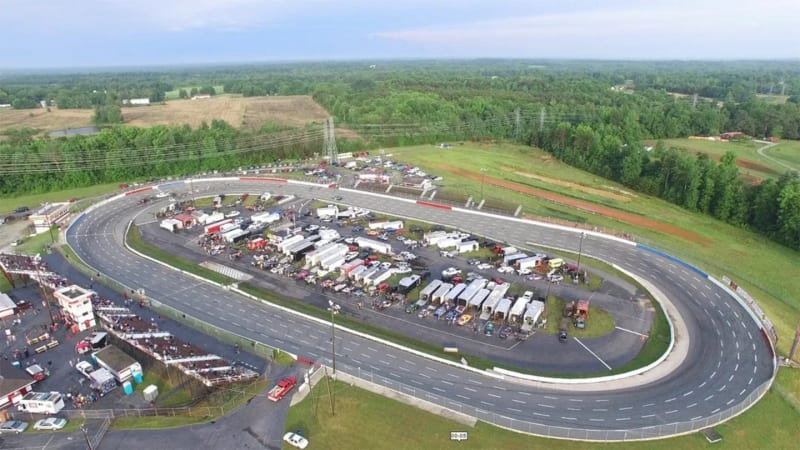 Every new catastrophe in 2020 buries the one before it, so it's easy to forget that many parts of the country are still slowly emerging from restrictions put in place to deal with the novel coronavirus. North Carolina is in Phase 2 of Gov. Roy Cooper's stepped reopening plan, which severely limits capacity at places like restaurants and retail outlets to 12 people per 1,000 square feet, and caps gatherings at 25 people. Bars and gyms remain closed, the governor only now discussing Phase 2.5 that would allow them to open again. As told by Autoweek, the owners of Ace Speedway in Altamahaw, N.C., Robert and Jason Turner, decided they couldn't wait for the state to give the all-clear. Over Memorial Day Weekend, the 0.4-mile track held its 2020 season opener with more than 2,000 fans packing the bleachers. The track said it checked attendees' temperatures before entry, and it worked with the Alamance County Department of Health on visitor rosters to enable contact tracing if that became necessary.

Robert Turner said he had little choice but to open, with a small business to run that needs paying customers, "And when I can’t run my business and I can’t go to my job and make a full paycheck, I’m in jail already. So, getting behind bars does not scare me." Turner and fans weren't put off by the coronavirus, either. Turner told the Times-News, "People are not scared of something that ain’t killing nobody. It may kill .03%, but we deal with more than that every day, and I’m not buying it no more." A fan told ABC11, "We are out here because we are tired of being stuck in the house. We are not afraid of the virus one bit."

As one would expect, the situation led to a standoff between the governor's office and Alamance County Sheriff Terry Johnson, as Ace Speedway has held two more races. Johnson said he wouldn't cite or fine the track because he believed the stay-at-home orders and social distancing measures unconstitutional. In a statement issued before the season opener, he wrote, "When I took my oath of office, I swore to uphold the United States Constitution. I will not enforce an unconstitutional law. Upon hearing the opinion of the County Attorney, I do not intend to stop ACE Speedway from opening on Saturday, May 23."

And now, as protests over the death of George Floyd took over the news, the Speedway has billed its races as peaceful protests protected by the First Amendment. Holding a "unity rally with racing," a sign at the track announced, "This Event is held in Peaceful Protest of Injustice and Inequality Everywhere." Sheriff Johnson told the Winston-Salem Journal, "From my understanding, they were going to have the pace car go around asking for unity of our nation for what is going on. You know, the fires, the tax on law enforcement, burning of buildings and stuff. And, by doing that, to me, that gives them the First Amendment right to protest peacefully."

In another statement after last weekend's race, Johnson again said he wouldn't issue any citations because he believes the track is being singled out. "I have found through research and contacts with other Sheriffs in the state," he wrote, "that numerous speedways and Go Cart Tracks ran this weekend in North Carolina with no action being taken on those owners or even warnings given. This concerns me greatly to know that my citizens have basically been singled out for the same alleged violations that are occurring all over the State of North Carolina." He was backed up by Mark Robinson, who's running for lieutenant governor, who told the audience at the race, "Today is about celebrating the freedom of North Carolinians, and not being afraid to stand up against the tyrant we have for a governor."

Gov. Cooper appears committed to bringing the track into line, though. North Carolina General Counsel William McKinney sent a five-page letter to Sheriff Johnson stating in part, "The recent races conducted by Ace Speedway ... constitute commercial events, rather than gatherings filling under the auspices of the First Amendment, and therefore do not fall within that exemption. The Governor has broad authority to restrict commercial operations to address emergencies, like the public health emergency posed by COVID-19." The governor said during a press conference that "Alamance is one of the counties that is having higher numbers than it should, and we’re looking forward to taking action against it in the coming week."

Ace Speedway's next race is June 19. Sheriff Johnson could be leaning toward enforcing the 25-person cap, but Robert Turner has said of selling tickets and inviting fans, "Unless they can barricade the road, I’m going to do it."