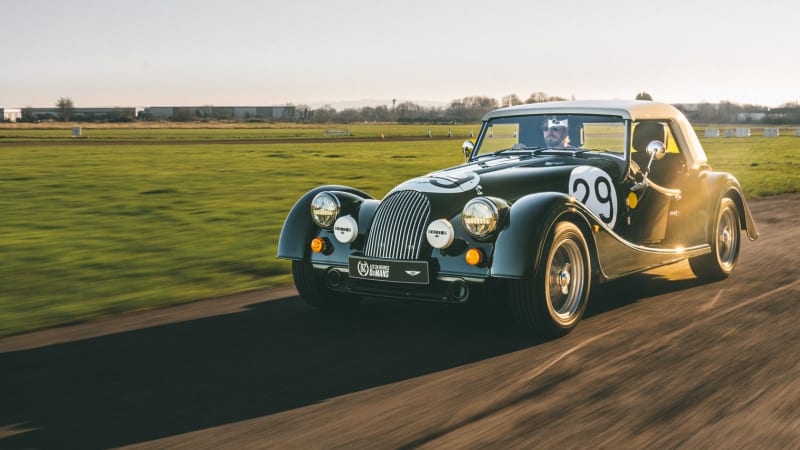 Morgan is highlighting its racing heritage with a limited-edition version of the Plus Four designed as a tribute to the car that won first in its class at the 1962 24 Hours of Le Mans. Limited to 62 units, the roadster gains a race-inspired look inside and out and a standard hard top.

Achieving a period-correct look was relatively simple: the Plus Four released in 2020 looks a lot like the Plus 4 that raced in 1962, though the two cars share very little underneath the sheet metal. Morgan started by fitting the convertible with a white hard top, which is notable for two reasons. One, the Plus 4 SuperSports that raced in 1962 was fitted with a white hard top as well. Two, it's the first time that a hard top has been offered on the Plus Four. Designers then added "29" exterior decals, Cibié driving lights, a Le Mans-style fuel cap, edition-specific emblems, and silver-painted wire wheels, among other features. Buyers can choose between dark green (like the SuperSports) and red.

Step inside and you'll find a metal plaque engraved with the car's serial number, leather door pulls, and wood trim. Leather-upholstered Comfort Plus seats come standard, so you shouldn't feel like you've just run a 2,200-mile Le Mans race after a trip to the grocery store.

It doesn't sound like Morgan made any mechanical modifications, meaning power comes from a turbocharged, 2.0-liter four-cylinder engine sourced from BMW and tuned to develop 255 horsepower and 258 pound-feet of torque. It exhales through an active exhaust system with black tailpipes, and it spins the rear wheels via either a six-speed manual transmission or an eight-speed automatic. Note that the turbo four's torque output grows to 295 when customers order the Plus Four with two pedals. Hitting 60 mph from a stop takes about five seconds.

Available in numerous right- and left-hand-drive markets, the Morgan Plus Four LM62 starts at £78,995 in the United Kingdom, a sum that represents about $107,400 at the current conversion rate. Extra-cost options include a soft top, a car-specific build book, and an accessory pack that bundles two-eared wheel spinners, tape over the headlights, a Mota-Lita steering wheel, and a chrome rear-view mirror.

In a way, Morgan's class victory at the 1962 24 Hours of Le Mans was a lucky one: all of the other cars entered in the 2.0-liter category dropped out of the race. The Plus 4's achievement shouldn't be understated, however. It averaged about 94 mph and it placed 13th overall. What's more, merely finishing the race was a major accomplishment at the time. Of the 55 cars entered that year, only 18 made it to the finish line.