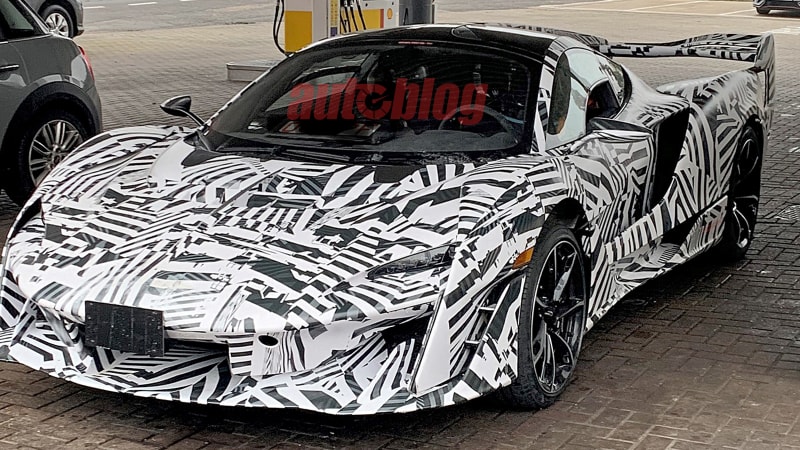 McLaren is quite a prolific supercar builder, so much so that it's dialing back the number of its releases. Still, development continues on various projects, including what may be called the McLaren Sabre, formerly known as BC-03, a vehicle that has stayed pretty well under the radar. But now we have some of the best shots yet of the car.

Our spy photographer caught this example at a gas station and managed to get photos from a few key angles and in good light, unlike the solo nighttime shot we saw nearly a year ago. What we can see looks just like the leaked renderings from about a year ago, too. It looks like a cleaner, leaner McLaren Senna on the whole. It has a giant wing and a big fin down the middle, plus the split side windows. But the various scoops and vents are toned down, the curves are gentler with subtle creases, and the nose looks more like a Speedtail's. There are some unique styling cues, too, such as how the wing comes down to merge with the body like an LMP endurance racer, and the nifty openings in the engine cover.

Details on the car aren't clear yet. Reportedly, only 15 units will be made. It will not be a hybrid, and it will cost around $3 million. That's about all we have to go on. It certainly looks like this prototype is pretty far along in development, what with the thin camouflage, so we're hoping to see it revealed soon, along with all the performance specs.