Mazda explains the thinking behind the MX-30's small battery pack 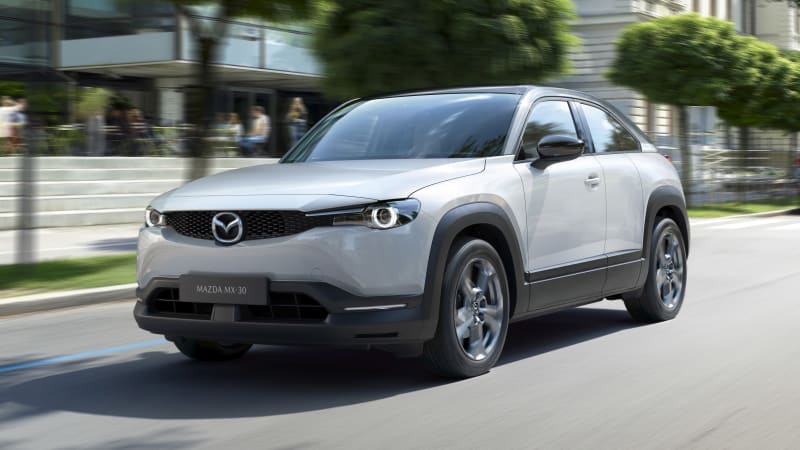 Mazda's first production-bound electric car, the MX-30, relies on a 35.5-kilowatt-hour lithium-ion battery pack for power. That's relatively small, but the Japanese firm argued it's exactly what the model needs to let motorists drive electric while keeping their environmental footprint in check.

Christian Schultze, head of Mazda's European research and development center, told Automotive News Europe the MX-30's battery is responsibly-sized. He explained engineers took a variety of factors into account when debating kilowatt-hours, including how much energy is required to build the pack, how much electricity is needed for a full charge, and the environmental impact of replacing the battery, which Mazda expects could be necessary after the MX-30 has covered about 100,000 miles.

Sticking with a smaller pack yields total CO2 emissions on par with a turbodiesel-powered Mazda3. In contrast, using a 95-kilowatt-hour battery (which is close to what Tesla's bigger models use) would have increased the MX-30's life-long CO2 output considerably by requiring more energy to build, and needing far more electricity to achieve a 100% charge.

We're not quite sure that math or battery longevity assumption hold up under scrutiny. In any case, small is the direction Mazda decided to go. The trade-off is that the MX-30 (pictured) is expected to drive for about 124 miles between charges, and that figure was achieved on the hugely optimistic WLTP testing cycle; real-world mileage will be lower. That's hardly a jaw-dropping number, and the crossover doesn't qualify for the coveted long-range label, but Schultze told British magazine Autocar it's more than enough to cover the daily transportation requirements of the average European motorist, which stands at a total of 31 miles. That's significant, because Europe will be one of the MX-30's key markets.

Deliveries are scheduled to begin in early 2021. Mazda hasn't announced whether it will sell the MX-30 in the United States, or if it will wait until it has a longer-range electric car to enter the segment.