Nowadays, many new vehicles allow over-the-air software updates, which are like gifts that keep on giving. Just when your car starts to feel stale—surprise!—a simple download can unlock new features and functionality. That type of fresh content is exactly what Lucid Air owners get with the latest OTA update called Lucid UX 2.0, which the company today announced is starting its initial rollout phase.

Read All About It: Lucid Air

With Lucid UX 2.0, the Air learns a lot of new tricks. For example, as soon as the driver sits down and buckles their seatbelt, its myriad digital displays will now instantly turn on, indicating it's ready to drive. The far-right touchscreen on the enormous display mounted on top of the dashboard also receives a revised layout with the controls for the most popular shortcut buttons—Home, Media, Navigation, and Phone—now positioned for easier access.

Other notable improvements include navigation directions that now appear on the screen in front of the driver and a wider variety of voice commands that Amazon Alexa understands, such as adjusting the rear-seat climate controls. Lucid says it's now easier to browse third-party apps thanks to improved functions like selecting favorites, playing media, and easier menu navigation. Drivers will also get a more accurate range prediction with the new software. 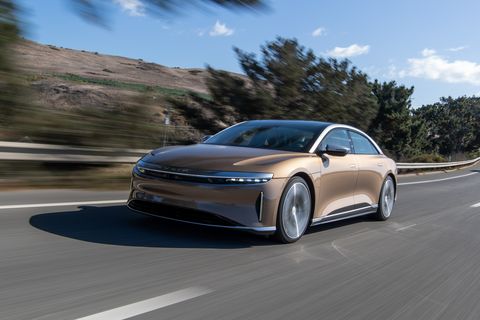 The software update also enhances the Air's driver-assistance technology, adding what Lucid calls Highway Assist. The feature combines adaptive cruise control and lane-keeping assist, which is something already offered on many other new cars but is useful nonetheless. Air drivers might be less prone to bump into stuff, too, with the new-and-improved visual cues for the parking sensors. The sedan's fancy headlights are now trained to automatically switch from high to low beams in more situations, and they'll also automatically level themselves.

Dealing with a frosty climate? Well, the new de-ice mode is said to effectively clear the windshield. Lucid also says that the Air will automatically lock and unlock itself in a "simpler, more intuitive, and more responsive way", but it doesn't go into detail, so we're not exactly sure how that process is actually improved.

So, how much does the new software cost? It's free.99—as in zero dollars. The Lucid UX 2.0 is also available on every Air that's currently roaming the open road. Unfortunately, the over-the-air update won't be complete overnight. While the company is now starting the first phase, it says the series of updates "will continue over the next several weeks" and that not all of them will be obvious right away. Meanwhile, all owners have to do is wait for a prompt to download and install each update. Bada bing bada boom!

Eric Stafford provides detailed car-buying advice by driving every vehicle on the market and analyzing test data and specifications. As a kid, he knew he’d never be a millionaire with a Jay Leno-like car collection, so he avoided financial success entirely to become an automotive journalist. After earning a college degree and working at a daily newspaper, the years of basically burning money on failed project cars and lemon-flavored jalopies finally paid off when Car and Driver hired him in 2016.