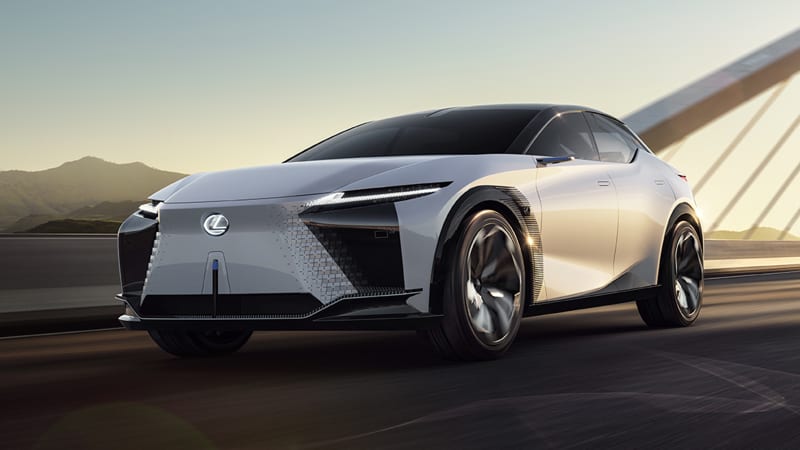 While the company has yet to release a fully electric car or even plug-in hybrid in the U.S., the company is adamant that it's ramping up electric plans. One way it's doing this is with concept cars, and the latest is the Lexus LF-Z Electrified, just in case you forgot what powers it before the middle of this sentence. It's not a specific preview of any particular model, but is meant as a hint of a series of, well, electrified Lexus models coming in the next few years.

The LF-Z is a clear evolution of the LF-30 Electrified concept from the 2019 Tokyo Motor Show. Like that concept, the front of the car effectively inverts the current Lexus grille design, with the "spindle" section in the middle being solid, and the area on either side covered with dark translucent panels that evoke open areas. The whole body is more crisp and creased than the LF-30, and it looks a little more grounded in reality. It has four conventional doors with actual door handles, the proportions are closer to a sedan or fastback, and a seemingly conventional taillight bar. But getting up close reveals many intricate details such as the cubic shapes in the front fascia, the frilled edges of the front fender flares, and the narrow breaks in the lighting.

The interior is ultra-minimalist, with all the display systems placed around the driver, and a simple dash that wraps around to the doors and the rear seats. The seats themselves have a similarly geometric design to the exterior, and the choice to highlight the driver seat in a contrasting upholstery is interesting.

Likely because the LF-Z doesn't preview any specific upcoming model, Lexus offered nearly no details about what powers the concept beyond electricity. It has the batteries mounted in the floor, and it features dual motors, one for the front wheels and one for the rear wheels, which isn't particularly remarkable. No range or power numbers were given. Steering is done by-wire, kind of like what you'll find in certain modern Infinitis, and the car features other bits of technology that are already available or coming soon to production cars such as augmented reality displays, a smartphone key system, electrochromic roof glass and reclining rear seats.

Still, we think it's a distinctive concept car that could spawn some similarly distinct production cars. Lexus announced that between now and 2025, it will launch more than 10 new electrified models as conventional hybrids, plug-in hybrids or fully electric cars. Two of those models will be released this year.