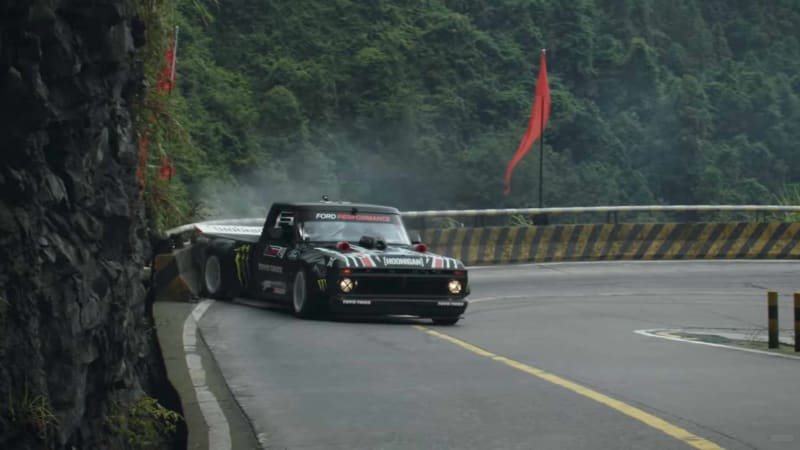 China's Tianmen Road is the go-to, out-of-the-way spot for record-setting and demonstrations of vehicle prowess. Alternately called one of the most spectacular roads in the world and one of the most dangerous, its 6.8 miles of two-lane needs 99 hard turns to climb from 658 feet to 4,265 feet up the side of Tianmen Mountain. Red Bull used the road for its Drift King event in 2013 and 2014, Italian amateur Fabio Barone scooted his Ferrari 458 up the mountain to set the first speed record in 2016, which Land Rover broke with a Range Rover Sport SVR in 2018, which VW broke again this year with the ID.R electric race car. Ken Block is the latest to accept the challenge, roaring his 914-horsepower Ford F-150 Hoonitruck up the lush green hill for "Climbkhana Two."

There are fewer diversions in this vid than there were in the first Climbkhana, the one where Block smoked his 1,400-hp Hoonicorn RTR V2 Mustang up Pikes Peak. However, no diversions are needed, because the road is the show, its narrow breadth and vertiginous edges providing all the emphasis of Block's skill that one gobsmacked viewer can handle. The slo-mo shots through the hairpins look like video games. There is a panda on a Segway-like contraption, though. Because China owns pandas and Ninebot, which owns Segway. Of course.

After this, if you're game for more wild video-game-like action through narrow streets and more, check out BJ Baldwin's "Recoil 4" through Cuba. That, and "Climbkhana Two," are better than the last five "Fast & Furious" movies put together. There, I said it.