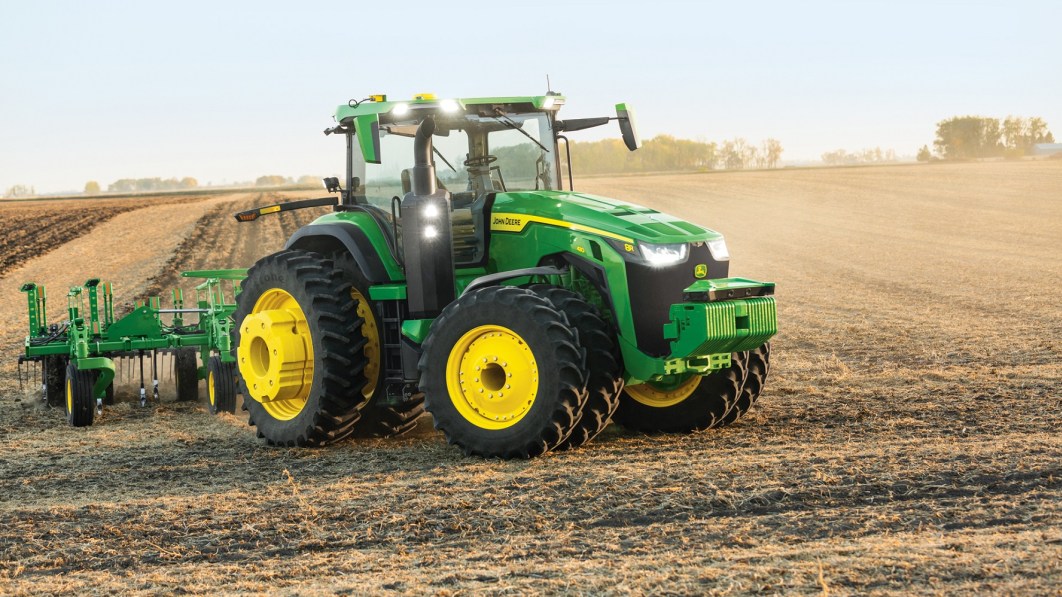 Each year, a growing number of companies travel to the Consumer Electronics Show (CES) to promise full autonomous driving. John Deere is delivering: It unveiled a self-driving tractor at CES 2022 that's ready for mass production and that's expected to begin working in late 2022.

Making a tractor autonomous is much easier than building a self-driving ride-hailing shuttle because it operates in a controlled, privately-owned environment. Farmers don't normally encounter school buses, bicyclists, and other motorists in their fields. John Deere started with an 8R model and fitted it with six pairs of stereo cameras that give the tractor a 360-degree view of the world around it. The images captured by these cameras are transmitted to and analyzed by what the company refers to as a deep neural network. It's the brain that tells the tractor whether it can keep going or if it needs to stop to avoid an obstacle. This system also ensures the machine is where it's supposed to be.

John Deere's autonomous tractor operates in a geofenced area so it knows where to turn around and when to stop. We're told that setting it up is easy: Farmers simply need to take it to a field, configure it, and launch the job using a purpose-designed smartphone application. It's fully autonomous, so it doesn't require human supervision (either in the cab or in the field), and the app gives owners access to images, a live video feed, and an assortment of data. They can even use their mobile device to adjust the tractor's speed and its implements, such as a plow's depth.

It doesn't sound like removing the driver from the job required making mechanical modifications. Power comes from a 9.0-liter PowerTech straight-six diesel engine that's twin-turbocharged to develop 410 horsepower. It's bolted to an e23 PowerShift transmission.

Pricing for the autonomous 8R hasn't been announced, but we won't have to wait long to find out: It will go on sale in late 2022. For context, the non-autonomous 8R (which is already one of the more advanced row-crop tractors on the market) starts at approximately $521,600.