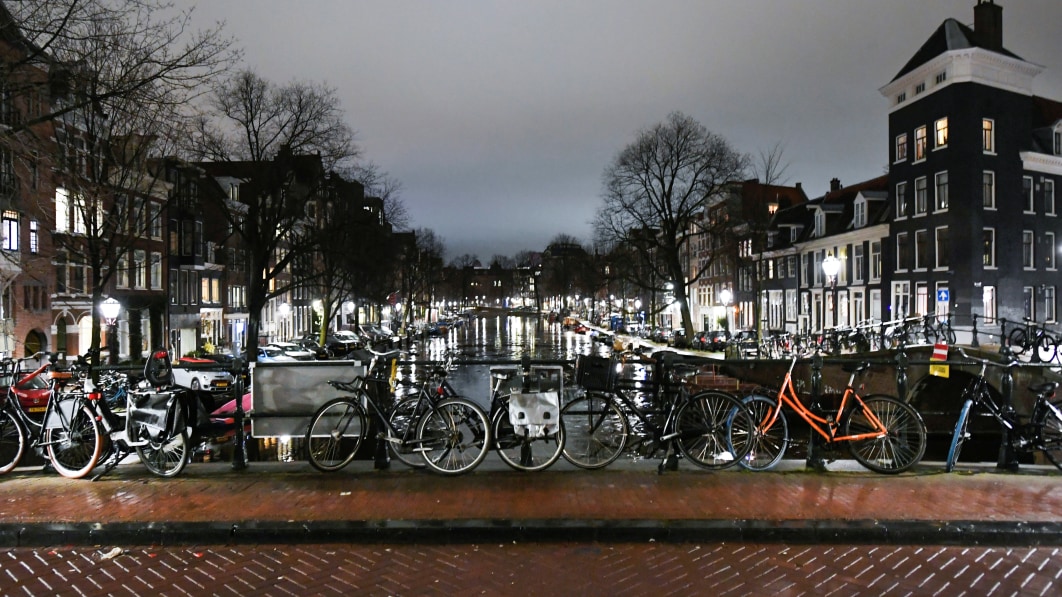 In a city where bicycles outnumber humans, the omnipresence of the machines can be overwhelming. The bikes of Amsterdam cluster at every curbside, line canals and bridges, and sweep silently around you when as you stroll. The urban fabric is saturated with cyclists, flowing through a complex network of bike-optimized lanes, paths, fietsstraten and woonerfs in numbers that can astonish — and intimidate — newcomers.

“You are here in the bike capital of the world,” Meredith Glaser announced to a gaggle of attendees at the Bloomberg CityLab conference in the Amsterdam this week. More than 60% of trips in the city happen on bicycles, she told us. As the director of the Urban Cycling Institute at the University of Amsterdam, Glaser helped develop an online course called Unraveling the Cycling City, which aims to explain how the Dutch transformed their transportation infrastructure to bring the bike to the top of the mobility food chain.

To tell that story — and show how other cities could follow the Dutch example — she led a group of neophyte riders on a field trip through the city’s streets at dawn.

Many of us were uneasy about setting off on an urban ride bare-headed. Why no helmets? “Look at the bikes you’re riding,” Glaser said.

We rolled out on standard-issue Dutch “black bikes” — utilitarian machines with big fenders, single gears and enclosed chains. Built for comfort and not speed, they allow the rider to sit upright; most riding mishaps are broken wrists, not head injuries, Glaser assured us.

As we clattered out along the cobblestones, we got a taste of why bikes are so well-suited to this environment. Cruising along the historic district’s ancient lanes and bridges in the early morning, it was easy to chat with companions and take in the scenery.

Dutch cycling, Glaser told us, is very social: Communication with fellow travelers, via eye contract and gestures and speech, is what allows riders to negotiate often-packed paths without incident. There’s no barking “on your left!” when passing; riders just flow silently past. At a red light, we were told to “herd the intersection” — pile up as tightly as possible, to make space for incoming riders.

Leaving the historic district, cobblestones gave way to the red pavement of a bike path running alongside a tram line. In this early hour, only a few other riders were out — parents with tiny kids tucked into child seats, sleepy commuters distractedly munching bagels or scrolling through phones, children pedaling to school in packs. I passed a bakfiet (“box bike”) with a huge happy dog standing in the front cargo hold, like a figurehead on the prow of a Dutch galleon. Hey, this was easy!

“Wait about an hour — we’ll see some pressure on the network,” Glaser said.

At an intersection near Alexanderplein, we got a taste of that. Here, cars, trucks, trams and cyclists converged as two busy arterials met. The city removed all the traffic lights at this crossing several years ago; bikes were just whizzing past each other, with cars and trams inching their way through at intervals. It looked anarchic. But the redesign proved to be safer — crash rates fell, since drivers and cyclists were forced to pay such close attention to each other.

The intersection offered a vivid illustration of the Dutch deployment of “safe system” principles, which hold that humans are innately error-prone, so road design must be forgiving, minimizing the ill effects of mistakes. A tiny illustration: We found ourselves on a narrow cycle track separated from the sidewalk by a low curb, so when I cluelessly drifted to the right to let a faster rider pass, the gentle curb just nudged me back into the proper lane instead of pitching me to the pavement. Mistake made; lesson learned.

“If you need a sign, it’s a bad design” is a planning axiom held in high regard in the Netherlands, Glaser told us. Often, the uses of various parts of the road are cued via the style, shape and coloration of pavers, which are standardized across the city via a regime known as the Puccini Method.

On to a neighborhood called Oost, home to many newer residents of the city — migrants from Turkey, Morocco and Suriname, along with more recent arrivals from Ukraine. About half of the area’s residents live in social housing, and most don’t own cars. Amsterdam’s public transit options look impressive to US eyes — trams seem to roll past every few moments — but Graser insisted that the city lags behind many EU cities in that respect, with its relatively puny subway network. That, too, has helped spur the adoption of alternative modes — not just bicycles but mopeds and motorized scooters of many sizes and shapes, along with tiny microcars that sit somewhere on the golf-cart-to-car continuum.

City regulations have strained to impose order on new micromobility variants; while new rules ban scooters and microcars from bike lanes, some encroach anyway. We had some dicey moments attempting to join the thickening flow of commuters swirling near the Amstel train station; speedier riders of e-bikes and scooters flew around our poky peloton of black bikes. But the underlying logic of the road network, which shunts major motor-vehicle traffic onto limited-access highways, kept us in line and upright.

What about pedestrians? One might argue that those on foot are on the losing side in the Dutch bike revolution, as cycle lanes and parking corrals gnaw at sidewalk space and complicate street crossings. To walk in Amsterdam is to be subjected to near-constant jangle of bike bells from riders who seem to have little interest in yielding their hard-won pavement. Glaser acknowledged that bike-pedestrian crashes do occur, but these low velocities, they’re usually minor. Meanwhile, the Dutch pedestrian fatality rate has plummeted since bike-centric street rehabs began.

In De Pijp, a now-gentrified former working-class neighborhood, it was easy to see why. We threaded through dense blocks of brick rowhouses on slim one-way streets, joined by only a handful of cars and delivery vans; bollards often foiled drivers entirely. In front of a small neighborhood school, we marveled at the stillness.

“This is hell driving in this neighborhood,” said Glaser, who once lived nearby. On one street, residents had taken their war on cars one step further, converting most vehicle parking spaces into patches of greenery, interspersed with bike corrals and a loading zone for neighborhood deliveries.

It’s not that cars were banned — in fact, for residents with private vehicles, the city built an underground garage nearby. But this maze of one-way thoroughfares leaves drivers at a severe disadvantage. Cars are obliged to pick their way warily through the city, cowed by thousands of tiny rivals. Near train stations, the scale of the bike takeover could be grasped — surrounding plazas were carpeted in heaps of bicycles; thousands more were stashed in underground garages.

For those from North American cities — where even the best cycle networks serve just a small fraction of the metro area and urban bike commuting is something reserved for the foolhardy and athletic — this role reversal was a source of endless wonder. We’d landed in a Planet of the Apes scenario, where bicycles had somehow evolved to be the dominant species.

But Glaser emphasized several times that Amsterdam’s bike-first approach wasn’t an accident of timing and culture but the deliberate product of policy changes that have come relatively recently in the city’s long history. In was only in the 1970s that a popular movement against rising traffic fatalities began to transform the country’s auto-oriented development patterns, and the crackdown on free parking and accompanying wave of parking-fee-funded bike infrastructure improvements didn’t arrive until the 1990s. Several times, Glaser produced before-and-after photos of specific streets, some less than a decade old, showing car-clogged streetscapes that could have been from any US city.

A few Dutch-specific factors helped this process along, Glaser noted. In addition to being very flat, Netherlands has no domestic automobile industry to lobby for car-only infrastructure, and its passenger rail network is so extensive that 85% of the population lives within biking distance of at least one station. The country boasts a robust pre-World War II bicycling culture, and its government’s command of land use can preempt the disputes between property owners and residents that delay or derail so many US transportation projects. More broadly, mobility and safety are universally understood to be public responsibilities — and the first priorities of any new development.

“There’s a deeply different collective government process here,” Glaser told us. “We’re two meters below sea level. That helps instill a sense of ‘We’re all in this together.’”

That doesn’t mean the Dutch bike takeover hasn’t drawn resistance. Equity tensions revolve around plans to drop speed limits and impose new rules on motor scooters, which are widely used by lower-income residents in distant suburbs. Those who cannot bike may find their housing options limited or their mobility needs unmet. The road network itself continues to evolve: Some cycle tracks are transforming into wider fietsstraten that allow a small amount of vehicle traffic, upsetting some traditional bike advocates. And grumbling about parking fees has an ageless ring that any US city leader would recognize.

Instead of a pedal-powered utopia, Amsterdam is “a regular city,” Glaser said. “People will do what they want to do and try to get away with it.”

But critically, this is a city and country that has managed to bring bicycling into the urban transportation conversation at a level that avoids the political polarization that is so inescapable in American life. Here, accommodating those on two wheels is less an ideological statement than a prerequisite for basic functionality.

“Bikes in public space isn’t a left-wing or a right-wing thing,” Glaser said. “It’s just what is done.”