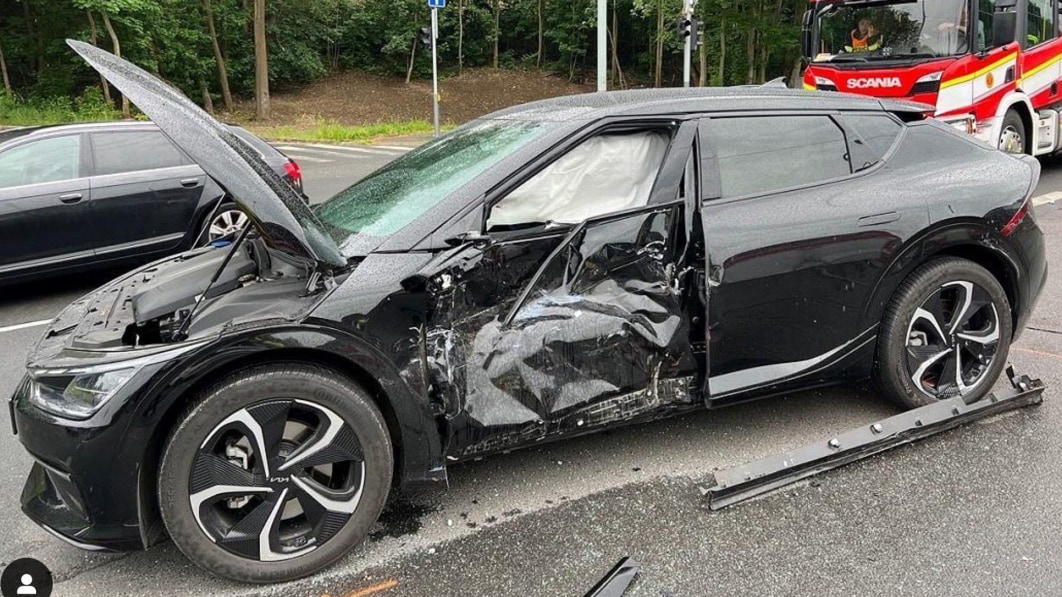 Former NHL legend Jaromir Jagr finally hung up his Stateside skates at the end of the 2017-2018 season after an absurdly long career, but the 50-year-old still plays hockey in his native Czech Republic. He took to Instagram early Wednesday to get the word out about a crash he had while driving his Kia EV6. Seems that he didn't have enough time to clear a set of tram tracks before the tram arrived and the high-speed shuttle whacked his car in the driver's side door. He posted a picture of the car with the smashed door and blown airbags.

His full caption, via Google Translate, is:

"Dear fans, and everyone else. I would just like to tell you briefly what happened today when I was involved in the accident. It was my mistake.

"On Plzeňská, I tried to cross from one direction to another. I checked the other side and drove into it at the right time. But there was a lot of traffic and I didn't have time to react to the tram, which was going at high speed in the same direction as me. I noticed her half a meter in front of me, at the last minute. I thought it was my end.

"I have always believed that force majeure has a hand over me, and today I have seen it again. Thank God!

"And it also surprised me and actually saved my Kia, from which, despite what it looked like, I climbed out without injury. But most importantly, nothing happened to the passengers on the tram. I would like to end this sad event. And I thank everyone for their understanding and also for their help to those who intervened on the spot."

Reports say that local police performed a breathalyzer test at the scene and that the result came back negative. The New York Post wrote that although Jagr "slightly injured one of his hands and was seen limping while leaving an ambulance," he declined a ride to the hospital. Looking at the door of the EV6, it's impressive that Jagr felt spry enough to walk away and text. It's also a testament to modern vehicle safety; the Kia looks like the "after" image of the 2022 EV6 put through Europe's NCAP side pole test, which slides a vehicle into a rigid pole at 20 mph.

We're glad Jagr and everyone are fine, and we hope this isn't a new annual trend. Last year, golfer Tiger Woods proved how safe the Genesis GV80 is, now hockey player Jagr has tested the EV6 in a real-world accident. Here's to hoping no athlete completes the Hyundai Group trifecta with a Hyundai in 2023.