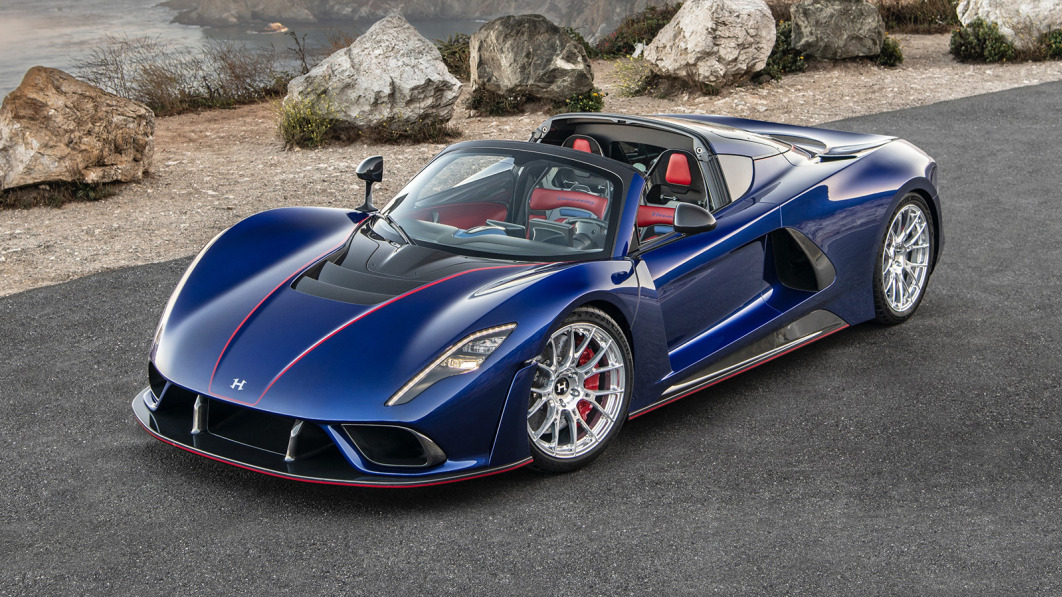 As promised, the Hennessey Venom F5 Roadster was revealed during Pebble Beach week. It's also nearly identical to the coupe it's based on, albeit with a removable roof and a few subtle tweaks here and there to make it more unique.

The roof is of course the centerpiece, and Hennessey wants that to be the case whether it's on the car or not, since it comes with a fancy carbon fiber display stand for when it's removed. There also is a soft travel bag for it, just in case you insist on bringing it along. The insulated top is made of carbon fiber and features an Alcantara lining. It weighs just 18 pounds.

Hennessey also fiddled with the exterior. Most notable is the new engine cover. Instead of a simple vented carbon fiber panel, the Roadster gets large piece of glass framed in carbon fiber and aluminum to make the twin-turbo V8 visible. The aluminum panels and carbon fiber surround are both vented, with holes in the carbon surround formed to match the rear heat extractor. The Roadster also gets unique wheels. They're milled from forged aluminum billet and have the Hennessey logo cut into one spoke on each wheel.

Mechanically, the F5 Roadster is basically identical to the coupe. It has the same twin-turbo 6.6-liter V8 making 1,817 horsepower and 1,193 pound-feet of torque with a seven-speed automated single-clutch sequential transmission. No 0-60 mph time was given, but Hennessey is still aiming for a 300 mph top speed. At the very least, the company expects it to top the 265-mph top speed of the Venom GT Roadster.

Hennessey will build 30 examples of the roadster, 6 more than the coupe. Each one will come in at $3 million and can be customized to the customers' desires. The company expects the model to sell out quickly after this reveal. Production will start later this year.