Hennessey Venom F5 Revolution Coupe coming to a track near you 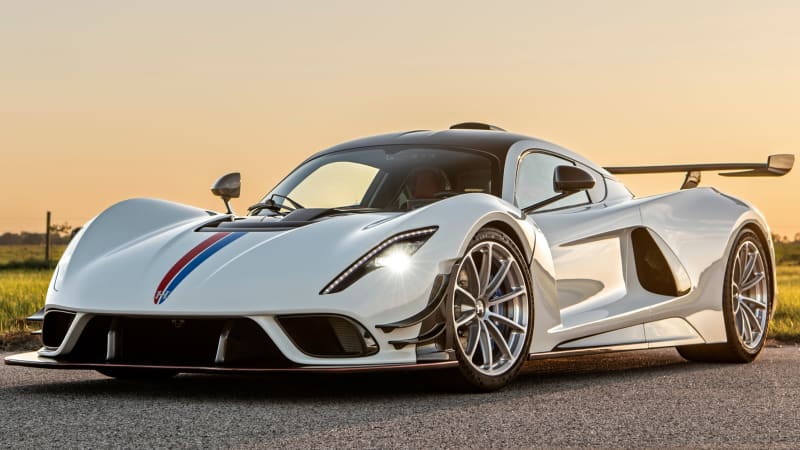 Hennessey isn't finished milking the Venom. The Texas performance shop revealed the Venom F5 Coupe in December 2020, the Venom F5 Roadster in August of last year, and is kicking off 2023 with the Venom F5 Revolution Coupe. In Hennessey's hierarchy of speeds, the original car was engineered to reach the highest production-car top velocity; the Roadster that followed was engineered to provide the most visceral experience; this F5 Revolution was made to master the track. Worked up from the initial F5 Coupe, the F5 Revolution gets the same basic goodies — carbon tub, 6.6-liter twin-turbocharged V8 with 1,817 horsepower and 1,193 pound-feet of torque, seven-speed automated single-clutch sequential transmission, carbon ceramic brakes. Hennessey says "the engineering team focused on reducing mass" so that the newest trim is the lightest Venom model and "tips the scales below 3,000 pounds." However, the the F5 Coupe is already less than 3,000 pounds and company didn't specify a new weight.

There are plenty of verifiable changes, though. A reshaped carbon fiber front splitter pairs with dive planes at the leading corners. A roof scoop shoves air into the mid-engine bay for enhanced cooling. The stand-up, adjustable carbon rear wing with endplates is claimed to shove more than 800 pounds of downforce on the rear axle at 186 miles per hour and more than 1,400 pounds of downforce at 249 mph. For those keeping track of the high-speed testing, Hennessey said the standard coupe hit 271.6 mph in March at the Johnny Bohmer Proving Ground. This one will be a touch less alacritous because of the appendages, but few owners will reach even 249 mph unless they end up at a Spa-Francorchamps track day.

The cost: $2.7 million, which is $600,000 more than the coupe, $300,000 less than the Roadster. We're told it's limited to 24 units, but our Spidey sense tells us that Hennessey calling this the Venom F5 Revolution Coupe points to a Venom F5 Revolution Roadster heading this way at around 250 mph. Anyone in southern Florida next week can see this family member make its debut at the Miami Motorcar Cavalcade Concours d'Elegance on January 15, 2023.