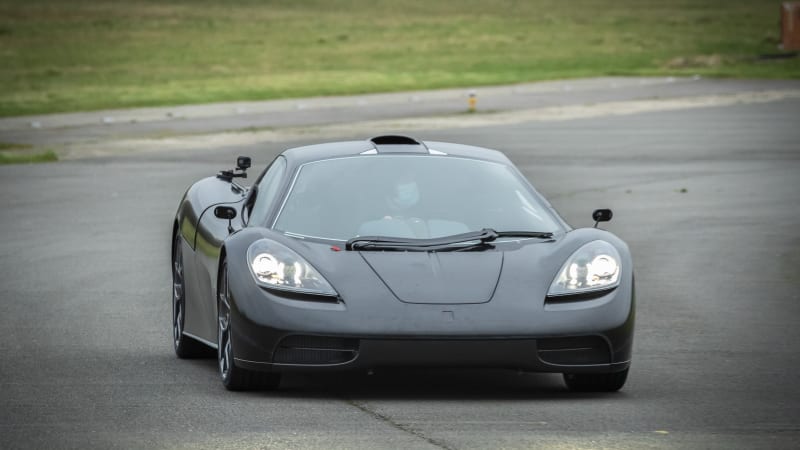 Gordon Murray Automotive is busily bringing what it refers to as "the greatest analog driver's car" to production. Called T.50, it was introduced in August 2020, and completed its first test laps on a race track in March 2021.

Company founder Gordon Murray personally put the first high-speed test miles on the XP2 prototype at the Top Gear test track in Dunsfold, England. While the Cosworth-developed, 3.9-liter V12 engine has a 12,100-rpm red line, the prototype was fitted with a rev limiter that won't be removed until later during the development process. And yet, Murray said his first laps behind the wheel of what many call the McLaren F1's heir left him with a good impression.

"The car was responsive, agile and rewarding to drive," he beamed. Realistically, he added that there are "still a lot of development miles to be completed and many more prototypes to build" before production starts in 2022.

Murray is funneling into the T.50 the experience he amassed over decades developing Formula One cars and about 13 years running McLaren's car-building division. As we previously reported, it's about the size of a Porsche 718 Boxster, and it tips the scale at under 2,200 pounds, meaning it's lighter than a Mazda MX-5 Miata. It's equipped with innovative fan-assisted aerodynamic technology, and its naturally-aspirated 12-cylinder engine is tuned to develop 654 horsepower at 11,500 rpm and 344 pound-feet of torque at 9,000 rpm. The T.50 is quick in a straight line, but its designers are putting a much bigger focus on handling and agility than on flat-out speed.

Like the F1, the T.50 offers a three-seater cabin that puts the driver front and center. Buyers will be invited to work with the company to modify the position of the driver's seat and the pedals during manufacturing.

Gordon Murray Automotive will begin building the T.50 in England in 2022. Production will be limited to 100 units globally, and pricing starts at about $3 million before taxes and options enter the equation. Most of the production run is already spoken for, so you'll need to act fast if you want to secure one of the few remaining build slots.