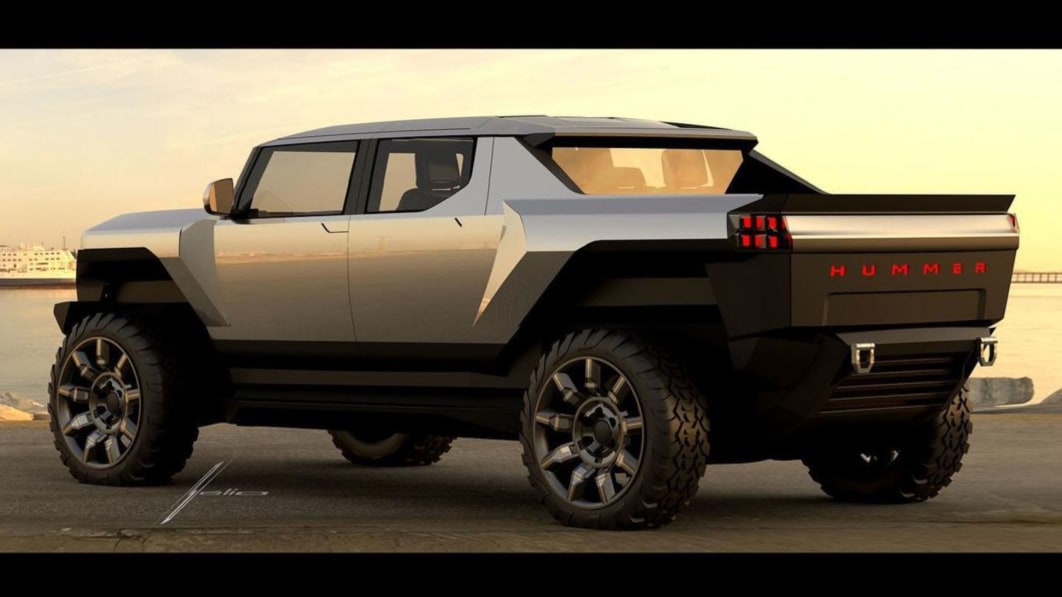 Like a new mother who's still so excited about her one-year-old baby that she can't stop showing ultrasound photos, General Motors is so excited about its biggest new baby, the battery-electric GMC Hummer, that it can't stop showing off development design sketches. The off-road monster with the 200-kWh Ultium battery pack debuted online on October 21 last year. The next day, the GM Design Instagram page posted some of the Hummer's early "theme sketches" leading to the production version. These had a conceptual flair to them, but were rather restrained. A month later, GM uncovered a series of development renderings showing off a much wilder truck bursting with more angles than a geometry text book. The archives have opened up again with a new "ideation sketch," this one between the first believable sketches and the second truck that Master Chief and Doomguy share on their days off.

All three sets of drawings show similar three-box proportions, it's the details that got a ton of love. On this newest sketch, the fenders flare a touch more than on the production truck, but the wheel wells are cut with the kind of clearance found on a Baja 1000 Trophy Truck. Out back, save for the tow hooks, the rear end is totally different than production. The sketch puts illuminated Hummer script across a narrow tailgate flanked by small square, taillights housing six individual elements. Beneath that, a bumper-less rear end puts nothing more than a sloped bash pate between the truck and the rocks it's just scrambled over. To our eyes, this is the best blend of production-ready comfort from the first sketches and zoot suit angles from the second that we've seen so far.

First deliveries of the GMC Hummer EV Edition 1 are expected before the year is out. When we get a chance to absorb the truck in its native habitats, we'll know whether there's cause for disappointment at what could have been. If so, with all this hunger among the monied for something different, we feel like restomodders have been given the perfect head starts on custom rebodied Hummers that would make things right.