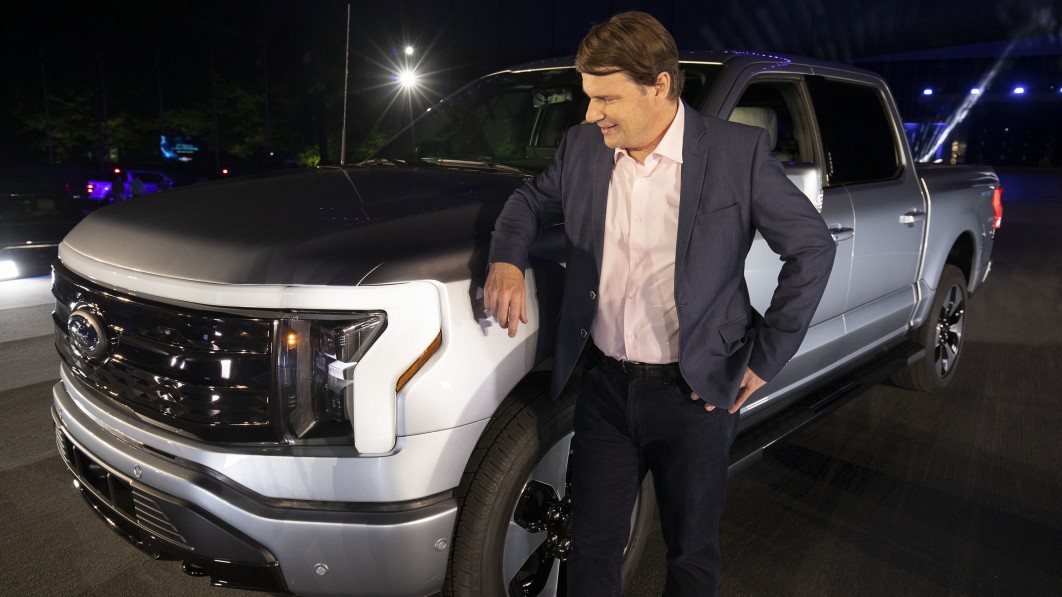 Ford Motor Co. is planning a major reorganization to prepare for the electric future, using Tesla Inc.’s success as a road map and accelerating EV spending by as much $20 billion.

The effort, led by a former Apple Inc. and Tesla executive, calls for Ford to spend an additional $10 billion to $20 billion over the next five to 10 years converting factories worldwide to electric-vehicle production from making gasoline-powered cars, according to people familiar with the plan. That would be on top of the $30 billion Ford already has committed to EVs through 2025.

The move is part of Chief Executive Officer Jim Farley’s initiative to challenge Tesla’s dominance in EVs even as he takes pages from the playbook of the electric-vehicle pioneer, now the world’s most valuable automaker. Investors have bought into Farley’s vision for Ford, briefly lifting the company’s market value above $100 billion in January.

The new plan also envisions a reworked Ford organizational chart, including the hiring of an unspecified number of engineers specializing in disciplines relatively new to the company, such as battery chemistry, artificial intelligence and EV software.

As part of the reorganization, the company has evaluated spinning off a small portion of its EV business to capture some of the immense value investors are giving electric startups, said one of the people, who asked not to be identified because the deliberations aren’t public. The potential move would involve lower-volume models, allowing the company to focus its efforts on mass-market EVs, the person said.

Ford declined to comment on the planned reorganization and potential spinoff.

“We are executing our Ford Plus plan to transform the company and thrive in this new era of electric and connected vehicles. We would not comment on speculation,” Mark Truby, the company’s chief communications officer, said in an emailed statement.

Doug Field, the former head of Apple’s car project, is leading Ford’s overhaul, the people said. Field was also a top executive at Tesla, where he engineered the Model 3.

Ford’s EV plans have accelerated since Farley, 59, became CEO 16 months ago. It has tripled output of the electric Mustang Mach-E model and doubled production of the F-150 Lightning plug-in pickup coming this spring. The company also is spending $11.4 billion with South Korea’s SK Innovation to build three battery factories and an EV truck plant in Tennessee and Kentucky.

Ford poached Field from Apple in September to disrupt the 118-year-old company. He’s working closely with Farley to make the legacy automaker more nimble, like Tesla, by adjusting Ford’s operational and manufacturing structure, the people said.

The restructuring is a work in progress and some elements may be changed or dropped, including the EV spinoff idea, the people said. The Ford family, which controls the automaker through a special class of supervoting stock, would have to be convinced a spinoff is worthwhile.

Farley has expressed admiration for Tesla CEO Elon Musk and acknowledged Ford is rethinking its mission as the company prepares to manufacture 600,000 EVs a year by 2024. The Dearborn, Michigan-based automaker wants to generate as much as half of its global sales from electric vehicles by the end of the decade.

To drive home his desire to emulate Tesla, Farley has taken to sharing news articles about the electric-vehicle maker with others internally, according to one person.

Farley, who did not comment for this story, has said he’s learned “a lot” from watching Musk transform his company from a struggling startup to a high-profit, global EV leader that investors value at more than $1 trillion.

“I really admire, frankly, the difficulties they had and the way they managed those difficulties into the success they had,” Ford’s CEO said in an interview last week with Bloomberg TV’s Emily Chang. “They are now making more than $10,000 a vehicle, because of their scale. I like that kind of business.”

It’s unclear which Tesla practices Farley plans to adopt as Ford builds out its own EV manufacturing capacity and accelerates its shift from a mechanical engineer-led workforce to one that increasingly is made up of software engineers.

Unlike Tesla, Ford also must manage the slow decline of vehicles powered by internal combustion engines, which now generate all of the profit necessary to fund the company’s EV aspirations. That’s an area Ford also is intensely focused on as it reinvents itself.

Farley sees gasoline-fueled vehicles as a core part of the company for many years to come and still intends to invest enough to keep it competitive with rivals, he said in a seperate interview last week. One way is to boost the services Ford sells to car owners -- a business that could generate $20 billion a year in revenue.

That could include selling drivers software to upgrade their car’s performance or enhance dashboard touchscreens. Or it may involve getting more business in the service bays at Ford’s dealers, which see 90% of owners go elsewhere for maintenance after their warranties expire, Farley said.

Ultimately, Farley wants even more of Ford’s customers driving electric vehicles -- and that’s the future he and Field are preparing for. Ford hopes to eventually overtake Tesla, but for now is trying to solidify its standing as America’s No. 2 seller of EVs.

“What it takes to succeed in this digital, connected, electric product are talents and know-how and a way of managing the business that’s different than what we’ve done in 118 years,” Farley said last week. “It’s kinda like snowboarding and skiing. We both share the lift, but as soon as you get off the lift the intuitions are wrong between both businesses. You have to really relearn to how to get down the slope.”