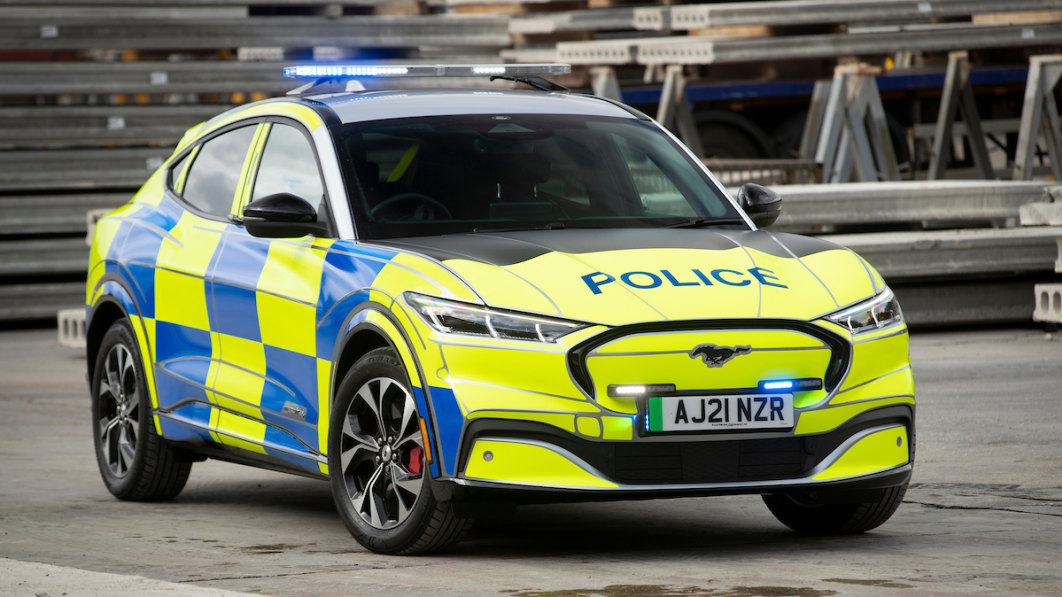 In the 80s and 90s, the scariest police cars on the road were the Ford Mustang SSP highway pursuit vehicles. Based on lightened Fox bodies, the 5.0-liter V8-equipped patrol cars hunted speeders across many U.S. jurisdictions, and even saw federal use in several government agencies.

This time around, the Mustang is a new Mach-E and the jurisdictions are in the U.K. Ford says it has received inquiries from several U.K. police departments interested in greener fleets, enough to warrant a concept in full police livery.

Based on a Mach-E Standard Range AWD model, a U.K.-based police vehicle specialty shop called Safeguard SVP added the rooftop beacons, sirens, livery, and other lighting. The setup, Ford says, does not reduce the 211-mile range, as the lighting uses the standard 12-volt battery and not the 68 kWh battery pack.

To be clear, this is a concept vehicle, not yet confirmed for production. Ford says that based on the reception, it'll decide whether to offer a similar setup on 88 kWh Extended Range RWD and AWD models. Future models might see increased battery capacity so more equipment can be fitted. It will be interesting to see how the Mustang Mach-E holds up in heavy rotation fast-charging in fleet use. But one edge to the Mach-E springs to mind: Cop cars often spend inordinate amounts of time sitting at idle, so an EV would be a distinct advantage there.

It took a Mustang SSP about 6.3 seconds to get to 60 mph from a standstill. That was a pretty fearsome number in its time. However, the two-door coupe was never built to carry perps with ease. A Mach-E Standard Range AWD model, on the other hand, has an even quicker 0-60 time of 5.2 seconds, and has the bonus of four doors and a large trunk.

Between 1982-93, Ford sold about 15,000 Mustang SSPs across some 35 states and Canada. The company would surely love to move as many Mustang Mach-E police vehicles. Ford plans to exhibit the Mustang Mach-E concept at the upcoming Emergency Services Show in Birmingham, England.