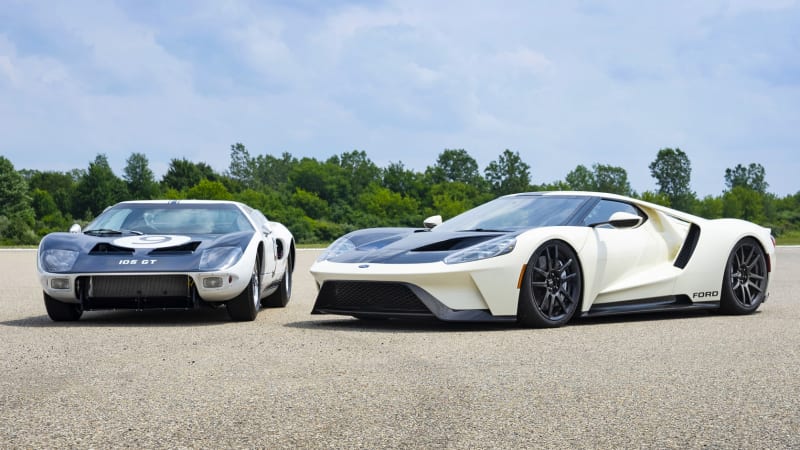 Ford will end production of the GT after the 2022 model year, but its design team isn't out of ideas yet. The latest (and probably last) Heritage Edition variant has been unveiled as a tribute to five prototypes built in 1964.

Instead of honoring a race car, like it has done with previous Heritage Edition models, Ford chose to shine the spotlight on one of the test mules that paved the way for the GT40. The company launched the program in 1963, and it presented the first prototype less than a year later at the 1964 edition of the New York Auto Show. Development work continued, and four additional prototypes were built to test various aspects of the car, including crashworthiness. Ford's diligence paid off: It famously beat Ferrari in a one-two-three finish at the 1966 24 Hours of Le Mans.

Luckily, using psychedelic camouflage to conceal a car's lines wasn't a common practice in the 1960s. The commemorative GT consequently wears a simple, two-tone Wimbledon White and Antimatter Blue livery that mirrors the prototype's, and it features a number of parts made with exposed carbon fiber (including the wheels).

There's more carbon fiber in the cabin. Ford also added Alcantara and leather upholstery, Antimatter Blue accents that create a visual link with the exterior livery, plus polished shift paddles. There are no mechanical modifications.

Ford will display the 2022 GT Heritage Edition at The Quail and the Pebble Beach Concours d'Elegance next to the 1964 prototype that inspired it, which wears chassis number GT/105. Approved buyers can already order the model, though pricing information hasn't been made public yet, and production is scheduled for January 2022. Production figures haven't been released, either, but previous Heritage Edition GTs were limited-edition models, and nothing suggests this one will be an exception. For context, 50 units of the Gulf-colored 2019 car were made.

While this could be the final Heritage Edition model (Ford has released one per model year since 2017, and the GT is dead after 2022), it's not necessarily the car's final evolution. Intriguing spy shots taken close to the Blue Oval's headquarters in Michigan show a prototype of what might be a V8-powered sendoff due out in the near future.