Ford F-150 Lightning Goes to Work as a Farm Truck

For a while, I was the fastest farmer in Washington County. No one could touch me. Kids in their lifted, souped-up Tacomas? Forget it. Dudes in tuned diesel Rams and Silverados? Nah. I was the man.

This ruling of green lights and passing lanes was unusual. Our regular farm truck is a 2022 F-150 crew cab with Ford's silky but hardly muscle-bound 2.7-liter twin-turbo V-6. But recently, I got a chance to swap internal combustion for battery-electric power, in the form of a

But could it work as a farm truck? That's the question I wanted to answer because I'd love to have a work truck that can cosplay as a Porsche 911 Turbo S when it's time to pass a dawdler on a back road. In fact, the Lightning is 0.2 second quicker than the Turbo S from 50 mph to 70 mph. That'll get respect down at the feed store. 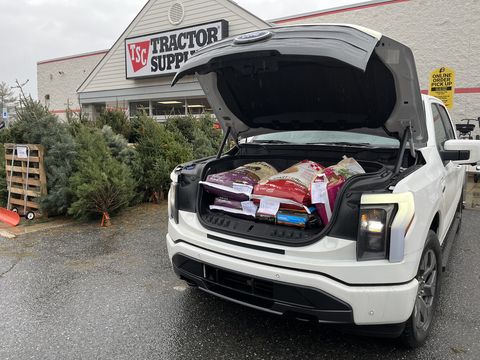 The frunk keeps the feed dry on a run to Tractor Supply.

However, that feed store is a long way from home. Around here, everything is. Our 200-acre farm is two miles up a dirt road, about 20 minutes outside of Montpelier (the smallest state capital in America!) so everything is at least 15 miles away. Combine those geographic facts with the farm business (picking up feed; delivering beef cattle and swine to the slaughterhouse or to other farms; towing mowers, log splitters, and various trailers), and we rack up 40,000 miles a year. Even the Ford dealership is 25 miles away.

I feel bad about this prodigious burning of non-renewable resources and its effect on the environment, not to mention the effect on our farm's strained bottom line. So I couldn't wait to get the Lightning out to the farm and put it through its paces.

On my first day with the truck, it was raining buckets, but the animals needed feed. Off to Tractor Supply. I couldn't put the five 50-pound sacks in the open bed because the rain would soak through the bags and ruin the feed. Frunk to the rescue: The Lightning's capacious front trunk serves up 14 cubic feet of cargo capacity where my truck stashes its V-6. Feed bags securely stowed, I couldn't have squeezed anything else in there, but I was still well below the 400-pound weight limit.

I did get some looks while loading. The sight of someone putting feed bags in the front of a pickup resulted in some raised eyebrows, and one guy smirked as though to say, “You idiot. You’ll ruin your engine.” 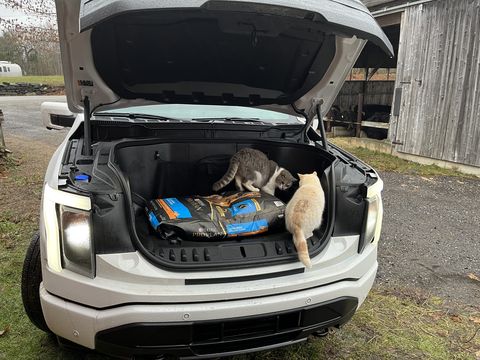 "This is not normally where we would find this."

As part of the modifications Ford made to ready the F-150 for EV duty, the Lightning got an independent rear suspension (IRS), making it the only F-150 with that setup. The extra weight of the battery and the IRS combine to create a planted and creamy ride that is almost as pleasing as the tire-barking launches. I thought our F-150 rides great, but the Lighting is noticeably better.

Because it has IRS, the Lightning doesn’t have that low-hanging solid-axle diff out back, so I hoped it might have better ground clearance than our ICE version and be better able to handle the deep ruts our tractors put in some of our farm roads. Not so. There are still powertrain components, heavily protected with a skid plate, riding low at the rear end. In fact, our F-150 has 9.4 inches of clearance versus the Lightning's 8.4 inches.

Doesn’t matter. After a few days with the Lightning, I knew I wanted one. However, a few critical issues remained: charging, range while towing, and price.

Charging Is the First Big Issue

Charging at home without a Level 2 charging station (ideally, Ford’s 80-amp Charge Station Pro) is untenable. During my time with the truck, I could only use a regular wall outlet, so when I plugged the Lightning in on a Friday, the 15.5-inch console touchscreen told me the truck would be fully charged by the following Tuesday. Meanwhile, the 80-amp charger can accomplish the task in eight hours. I could easily adjust to that. The Charge Station Pro also unlocks the Lightning's potential as a backup generator, although that requires more hardware for your house. But even straight off the lot, the Lightning Lariat's 9.6-kW Pro Power Onboard generator and its 10 120-volt outlets (plus one 240-amp) open up a lot of possibilities for portable power, a boon on any farm. 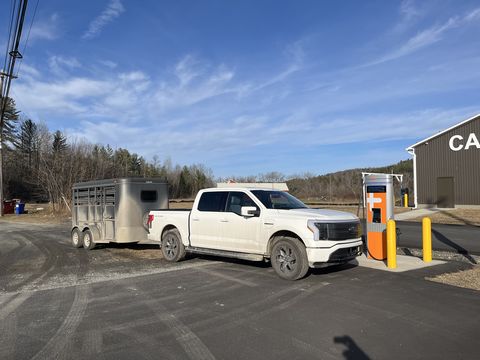 But because I'm stuck with trickle charging at home, I was forced into the fray at the local Level 3 pay-per-use chargers in Montpelier. Vermont is a famously green state, but I found only two Level 3 chargers in its capital. Each was limited to one-hour charge times, which provided about 75 percent of total charge—or about 240 miles of range—with the Lightning's optional 320-mile extended-range battery. According to local etiquette, you're compelled to sit in your vehicle while charging, or you get a nasty note stuck under your wiper when you return. (Ask me how I know.) There was always someone else waiting to use the chargers, and often I was asked how far I was going, implying that if I was only going a short distance, their charging needs trumped mine. I guess a Lightning might need a few years' worth of dents and scrapes and long-unwashed mud to properly convey a "you're better off not bothering me" vibe.

My charging tribulations would be solved if I bought a Lightning, given that the extended-range models include the 80-amp charger. But the second big issue is endemic to any vehicle that regularly hooks up a heavy trailer: greatly reduced range while towing. Depending on the load, this is generally estimated as a 50 percent reduction. Therefore, in theory, the Lightning with a full charge should have a range of about 160 miles while towing. We tow a lot of stuff farming.

One of our regular destinations is the slaughterhouse 61 miles away in the Northeast Kingdom of Vermont, right up near the Quebec border. I had a slaughter date during my time with the Lightning, so I attached our 2350-pound stock trailer and loaded two pigs and one lamb in the trailer, in total about 3050 pounds. We started with a 92 percent charge, so even with the 50 percent range reduction, I should've been able to drive there and back and still have 10.5 miles remaining.

Despite the worries about range, I really liked how the Lightning didn't seem to notice I'd attached a trailer. Our gas F-150 noticeably lags when towing, and I need to adjust my driving and expectations accordingly. The Lightning and its 775 pound-feet of instant torque barely seemed to register the load at all. And when I reached the slaughterhouse, I had 54 percent of battery charge remaining, good for 74 miles. Right on target. 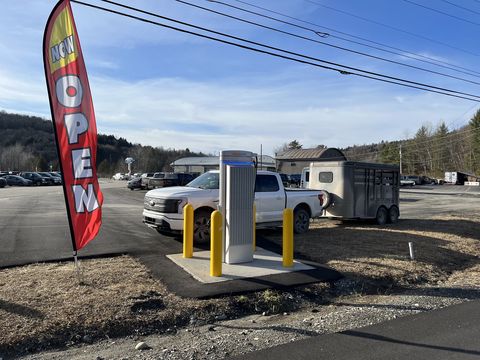 A charger at a dealer that sells EVs: What an idea!

I had a couple of errands to run on the way back, so 25 miles from home I had 27 miles of range left. I might make it, I thought, but if I came up short I was looking at a costly tow and likely hours of waiting in the cold for the tow truck. Fortunately, there was one charger on the way home, at the Ford dealer, and the lot was empty so I could pull up to the charger without detaching the trailer. I have never seen a pull-through EV charger, but this was the next best thing. Hopefully, as the high-speed charger network is built out (the government is funding 500,000 new chargers in 35 states), there will be plenty of pull-through spots for trucks with trailers—and the inevitable larger EVs, like Mercedes’ upcoming eSprinter.

I'm hoping by the time I can actually order a Lighting and get it built and delivered, Ford and the world's EV engineers may have improved the battery or efficiency, so range while towing is no longer such a big issue.

There'll still be another big issue, though. Farming is hardly lucrative, and my sample Lightning had an MSRP of $89,214, about $30,000 more than our gas version. And Lightning prices keep going up. That's a lot of bacon. In our case, literally.

It was fun being the fastest farmer in Washington County. But I'd prefer not to be the most broke one, too.