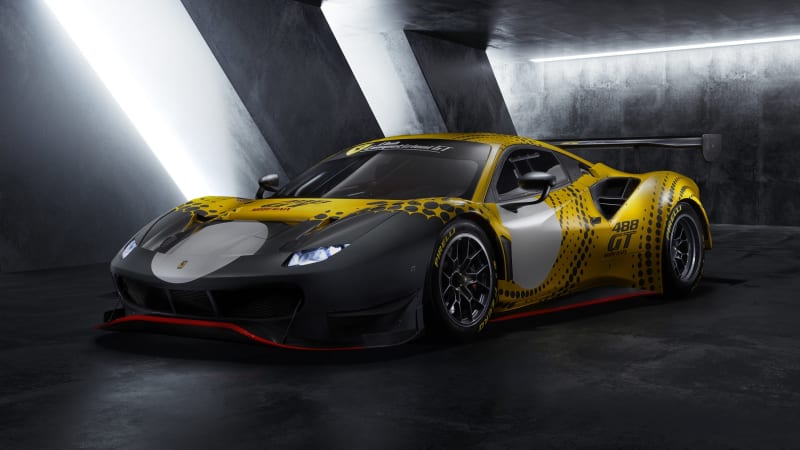 Ferrari is developing its first SUV, but venturing into new segments is not an excuse to stop racing. It created the next track-only evolution of the 488 by putting technology from its GTE and GT3 race cars under the same roof.

Called GT Modificata, the newest 488 explores what's possible when engineers are unfettered by rules except the ones they lay down. Ignoring FIA regulations spawned a twin-turbocharged version of the 488's V8 that makes 700 horsepower thanks to modifications like high-performance mapping. It spins the rear wheels via an automatic transmission whose ratios can be customized during the production process, and a carbon fiber clutch.

Skirting the FIA's rules also allowed Ferrari to give the GT Modificata a more aggressive aerodynamic profile that moves the pressure center forward, which increases downforce without adding drag. Pilots can rely on 2,200 pounds of downforce at 142 mph to keep the wheels planted on the ground. Most of the suspension bits come straight from the 488 GTE, which races in events like the 24 Hours of Le Mans, while Brembo brakes and an ABS system sourced from the 488 GT3 Evo bring the GT Modificata to a stop lap after lap with limited fading.

Carbon fiber and aluminum keep weight in check, so Ferrari added equipment like a high-resolution rear-view camera and a second seat to the list of standard features. We're nonetheless talking about a track-only car, so the cabin features basic buttons and toggle switches instead of the more luxurious bits found in Ferrari's road cars, a full roll cage, and a carbon fiber dashboard. Bosch's telemetry data acquisition technology is built in.

Blending GTE and GT3 technology inevitably creates a car that's ineligible to race in either category. Ferrari confirmed the GT Modificata will only be able to participate in various open track days around the world and in Ferrari Club Competizioni GT events, which welcome a growing list of the brand's closed-wheel cars ranging from the F40 to the aforementioned 488s. In 2021, the calendar includes five events held at the Virginia International Raceway, Monza, Watkins Glen, Suzuka and the Nürburgring, plus the Finali Mondiali at Mugello.

Ferrari hasn't revealed pricing, but it stressed the GT Modificata will be built in limited numbers. Only drivers who have recently raced in Competizioni GT with Ferrari or Club Competizioni GT will have the opportunity to buy one.