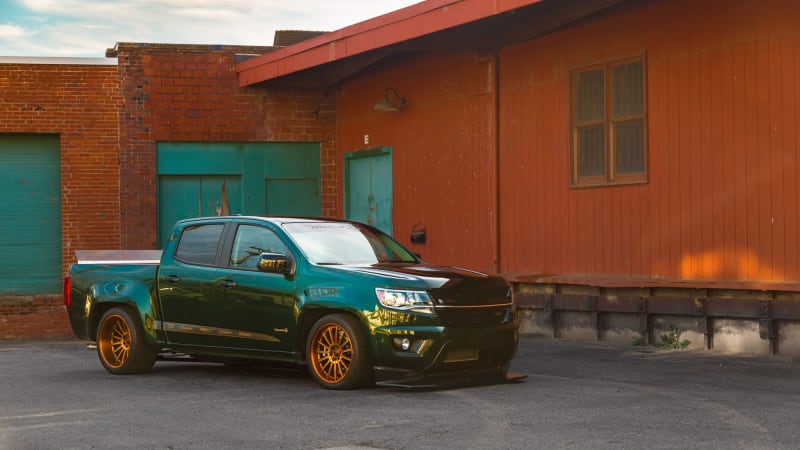 In the 2010s, the truck-tuning world gradually moved away from go-fast mini-trucks as it shifted towards rigs with sky-high ground clearance and fat tires. North Carolina-based tuner Mallett Performance bucked that trend by bringing a highly modified Chevrolet Colorado sitting a few inches off the ground to the 2015 SEMA show. Five years later, it's ready to part with the Hellcat-baiting pickup it spent months building.

Mallett started the project by sourcing a twin-turbocharged, 3.6-liter V6 from Cadillac's brilliant ATS-V and completely tearing it down. Its mechanics rebuilt it with a forged crankshaft, forged pistons, titanium connecting rods, and a throttle body sourced from a seventh-generation Chevrolet Corvette. The turbochargers stayed on the work bench (and likely ended up on Craigslist) so the six could receive a 1.9-liter supercharger. It was designed to run on 109-octane fuel, according to Muscle Car & Trucks, and it exhales through a custom exhaust system.

The long list of modifications increased the V6's output to somewhere in the vicinity of 700 horsepower. To add context, the 3.6-liter makes 464 horsepower in the ATS-V and a stock 2015 Colorado has 200 or 305 horsepower depending on whether it has four or six cylinders under the hood. Mallett reinforced the stock automatic transmission, fitted an adjustable suspension, and installed huge Brembo brakes to keep the cavalry in check.

The modifications go far beyond the specifications sheet. The tuner notably raised and narrowed the rear part of the frame, and it made the cargo box nine inches wider in order to fit the massive tires needed to transfer over 700 horsepower to the pavement. The front end received a new-look grille and a carbon fiber splitter, while the interior was decked out with water buffalo leather inserts and a six-speaker sound system -- it was built for SEMA, after all, so anything that helped it stand out in a crowded convention center was fair game.

Mallett explained it's selling its Colorado to make room for new projects. Located in North Carolina, the truck has only 600 miles on its odometer because it spent most of its life going from one car show to the next. It's priced at $63,500, according to a Facebook ad, which sounds like a steal considering the work that went into building it.