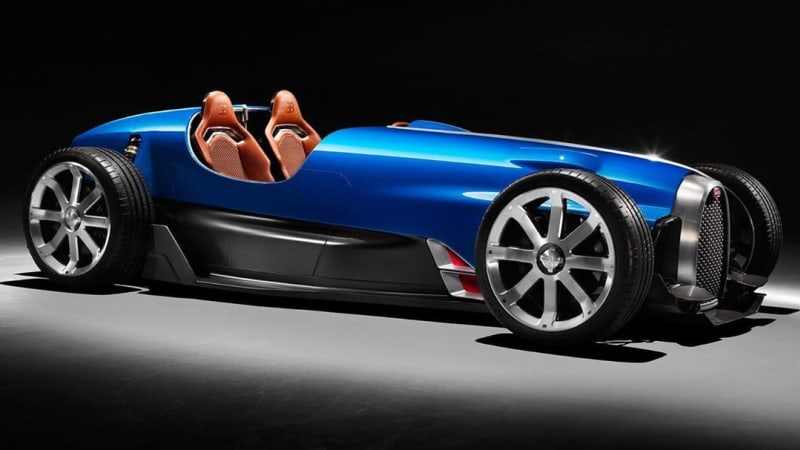 German engineering and design firm Uedelhoven Studios has reimagined the Bugatti Type 35 as a modern roadster. It's visibly inspired by the original model, but it's lower, sleeker, and made largely with carbon fiber.

Uedelhoven Studios isn't a household name, even in enthusiast circles, but it has helped create numerous concept cars including the 2020 Hyundai Prophecy, the 2019 Hyundai 45, and the 2019 Audi AI:Me. It explained that its designers began brainstorming ways to bring the Type 35 into the 21st century in 2015, though it's unclear whether Bugatti was involved in the project. We didn't see it when we went behind the scenes in its design studio to discover some of the unbuilt models it developed in the 2000s and the 2010s, including a V8-powered coupe.

Called Type 35 D, a designation never used by Bugatti, the roadster is instantly recognizable as a follow-up to the successful race car thanks in part to a horseshoe-shaped grille surrounded by a thick chrome frame, a tapered body and light blue paint. The suspension system's components and the wheels are fully exposed, like on the original model, but Uedelhoven added fatter tires and a sizeable air diffuser that's wider than the body.

Peeking inside reveals wood trim on the steering wheel and the gear selector, leather upholstery, and a copious amount of carbon fiber. The center console is loosely inspired by the one fitted to Bugatti's current-day models, like the Chiron, with round instruments (including a digital gear indicator). It looks like there's a screen on the dashboard, too, which strongly suggests the cabin isn't as closely linked to Bugatti's heritage as the body.

What's under the hood hasn't been revealed. We think the front end looks a little too narrow to house Bugatti's thunderous 8.0-liter W16 engine and its four turbos. Released in 1924, the original Type 35 was powered by a 2.0-liter straight-eight engine tuned to develop about 90 horsepower, a magnificent amount at the time.

We don't know what's next for the roadster; we've reached out to Uedelhoven and Bugatti to find out more, and we'll update this story if we learn more. We'd love to see the Type 35 D race like the original, which famously won more than 1,000 races (including the grueling Targa Florio held in Sicily) between 1925 and 1931.