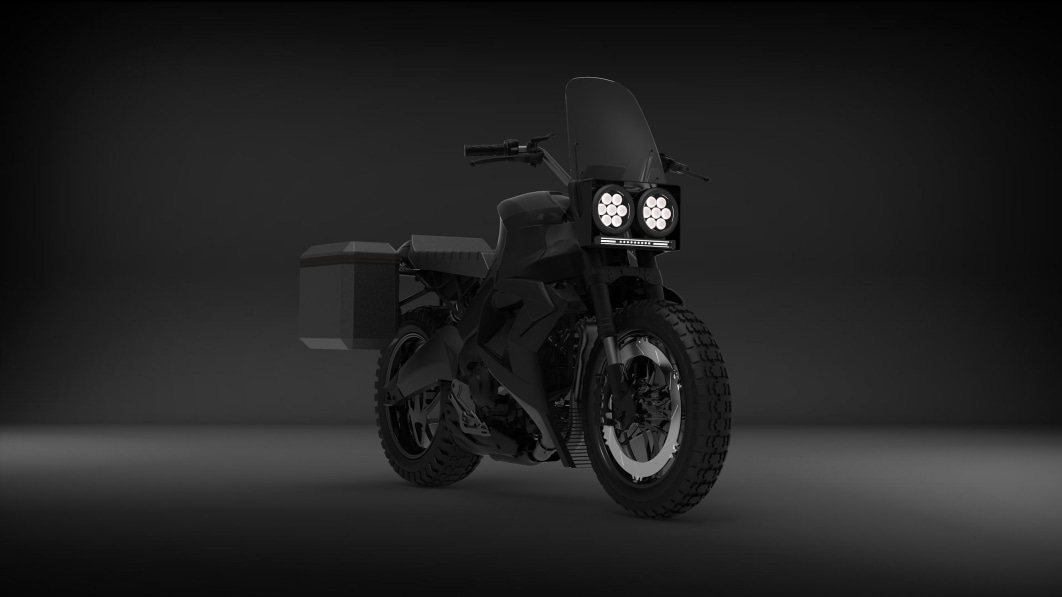 Buell has two new bikes to show at next weekend's Daytona Bike Week. When they go into production — anticipated to be fall this year — they will almost double the Michigan-based motorcycle company's current lineup of Hammerhead 1190 superbike, 1190SX naked, and 1190HCR hill climb racer. The first new entry is the Super Touring, a touring and adventure bike based around Buell's tried and true heart, the 1,190-cc V-twin. Called "the world's fastest touring bike" — off the trail, we assume —  the Super Touring 1190 will get 185 horsepower and 101 pound-feet of torque to move its vertical face and upright stance. Based on the renderings, this one brings a utility toolkit looks to a growing class of tourers with liter engines, including the one recently fielded by Buell's former owner, the Harley-Davidson Pan America 1250. Anticipated on sale in 2023, starting price clocks in at $21,995 before dipping into a promised lineup of accessories.

The second Daytona display is the Buell Baja DR, the "DR" for dune racer. This one is a trellis-framed desert runner based off the 1190HCR competition bike, the racer equipped with an extended swingarm for running up steep stuff that won the 2020 AMA Pro National Hillclimb title. The Baja DR gets a shortened, adjustable swingarm creating a wheelbase from 66 to 70 inches. Its V-twin channels 175 hp and 101 lb-ft to its the rear wheel, which is 10 horses down on the competition two-wheeler. Calling this one "the world's fastest dirt bike," Buell president Bill Melvin said, "Less than 1% of the world is covered with pavement, the Buell Baja DR is designed to dominate the other 99.7%. It will give riders the freedom to go anywhere in the world, faster and with more power, harnessing our 1190 engine."

For any who are confused about which Buell incarnation this is, the first thing to know is that it has nothing to do with Erik Buell except using his last name. The Wisconsin engineer whose legend lives on whenever Buell motorcycles comes up has moved on to a new venture called Fuell, which makes an e-bike now called the Flluid-1S and is preparing to release an electric motorcycle.

The short story of the reincarnated Buell motorcycles is that when Harley-Davidson sold Buell after the 2008 financial crisis, Erik Buell wasn't allowed to use his name as a brand or build road bikes, so he picked up the pieces under the new name Erik Buell Racing. He eventually got to build street motorcycles, turning out the EBR 1190RR and 1190RS as successors to the 1125R bikes from the Harley days. EBR entered a bad marriage with Indian motorcycle maker Hero in 2013 that led to bankruptcy in 2015. Hero bought the EBR R&D department, Liquid Asset Partners (LAP) and its CEO, Bill Melvin, bought the remainder out of bankruptcy proceedings. LAP was able to get the rights to the Buell name in the U.S. in 2020, and almost exactly one year ago promised to release 10 new bikes by 2024. Two are already on the market and being delivered (the 1190HCR is competition-only for now), two more will greet the world next week.

Daytona Bike Week runs from March 4 to 13, Buell planning its debuts for March 5. Anyone interested can put a $25 reservation down on the Super Touring at the Buell site that day. Melvin says variety will grow with future models, with "medium- and small-displacement motors" among a range of cruisers, dirt bikes, dual-sports, and tourers.