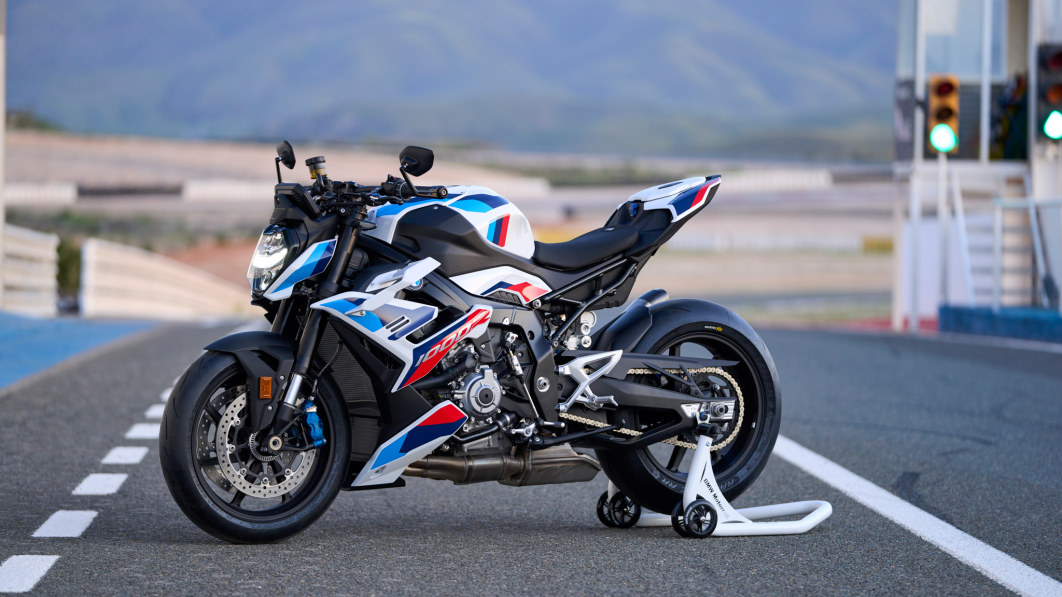 BMW just updated its first M bike, the M 1000 RR, but it’s a hardcore motorcycle that may be too focused for many. Alongside the updated RR, BMW addressed that issue with a new M 1000 R model, a slightly less intense bike that still delivers solid power and performance. The $22,040 motorcycle is due in January 2023.

The M R, as it’s called, gets the same 999 cc four-cylinder shift cam engine that the RR carries. It produces 205 horsepower and 83 pound-feet of torque. BMW shortened the secondary gear ratio, using 47 teeth instead of 45, and shortened the ratios of the fourth, fifth, and sixth gears. The bike also gets titanium valves and lightened internal components.

BMW gives the M R four driving modes for the street and three for the track. Rain, Road, Dynamic, and Race handle street duty, and Race Pro 1, Pro 2, and Pro 3 offer configurable modes for track use. The Shift Assistant Pro system eliminates the need for clutch use and allows faster gear changes.

Though we’re calling this a less-hardcore bike than the RR, the M R still offers dedicated performance features that many road-going bikes lack. BMW equips launch control and a pit lane speed limiter function that enables a set riding speed in any mode. The bike features aerodynamic components that generate up to 22 pounds of downforce at 136 mph.

BMW based the M R’s suspension system on components from the S 1000 R motorcycle and says that the bike’s chassis design allows it to be very narrow. The adjustable fork offers ten tuning levels with different damping rebound and compression stages.  It’s joined by a standard damping control system that changes with riding mode selection.