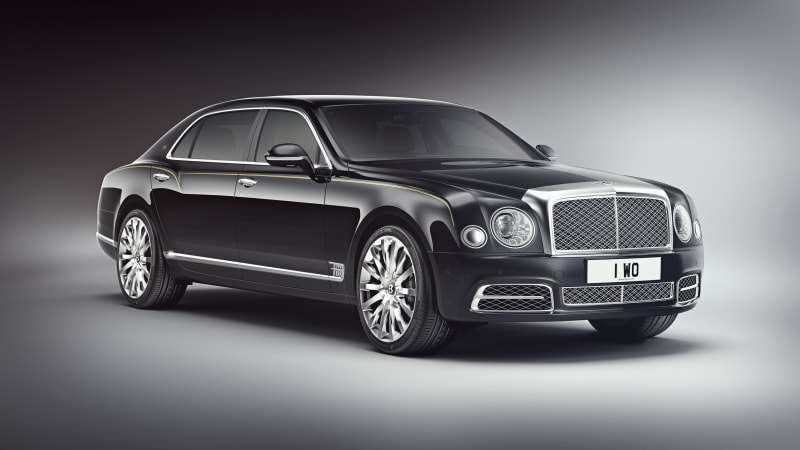 Bentley's versed in special editions for China, although it's been a while since we last saw one. In 2010, the English automaker released the Continental GT Design Series China and Flying Spur Speed China, following that up a year later with the Linley Continental Flying Spur that was limited to a mere 10 units. This time around, 15 Chinese buyers get the chance to order the Bentley Mulsanne Extended Wheelbase China Edition in any color they want so long as it's black. This being a product of Bentley's Mulliner bespoke division, though, buyers do get a choice of two special blacks. Onyx black imbues the abyssal shade with "a hint of dark blue" as well as darker tones, resulting in the "deepest black finish offered by Bentley." Mulsanne shoppers who like their blacks a bit more uplifting should opt for Black Velvet, said to be "a richer black-based finish" shot through with red pigments, creating a color recalling black cherries. Both hues are hand-applied, as is the gold fine line running along the Mulsanne's shoulder.

Three vogue, two-tone interiors will be available, in either Fireglow with Imperial Blue, Newmarket Tan with Burnt Oak, or Shortbread with Redwood. Crewe artists embroidered the hide covering each seat with "an expressive interpretation" of London's skyline that includes widely recognizable sights: Tower Bridge, the London Eye Ferris wheel, the Shard and Gherkin towers, and The O2 arena. The same design is inlaid into the chosen veneer on the passenger's side.

The 6.75-liter turbocharged V8 with 506 hp and 752 pound-feet of torque goes untouched. Bentley will share pricing only with the 15 souls ready to purchase, but the standard sedan starts at more than 5 million yuan, or almost $750,000 American. Buyers would be advised to have a Bentayga on hand to convey the funds to the dealership.