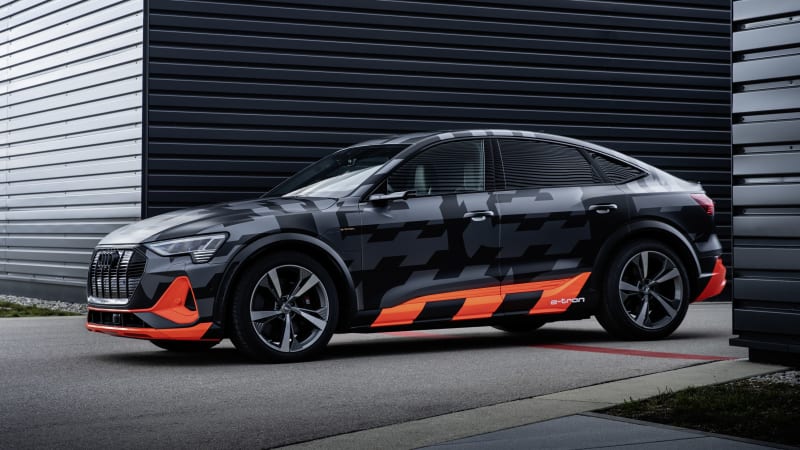 Audi is next out of the Volkswagen Group gate with hot versions of its battery-electric rides. The Ingolstadt automaker announced S versions of the E-Tron and E-Tron Sportback, which add power and performance by adding a third motor to the drivetrain.

The standard E-Tron puts one motor on each axle, the front producing 168 horsepower and 182 pound-feet, the rear producing 188 hp and 232 lb-ft. in the E-Tron 55. The S models move the more powerful rear motor to the front axle, put two of the less powerful front motor on the rear axle, and upgrade the power equation. The front motor in the S models peaks at 201 hp and 262 lb-ft, each rear motor peaks at 177 hp and 228 lb-ft. Combined output comes in at 429 hp and 596 lb-ft in typical conditions, peaking at 496 hp and 718 lb-ft during eight-second spells of extra boost when the driver pushes the accelerator past a detent. That boost mode provides 94 hp and 228 lb-ft more than available in the entry-level E-Tron, with each S model able to make the run to 60 miles per hour in 4.4 seconds.

Battery capacity holds steady at 95.3 kWh, but the sporty utes are given access to more of that capacity, tapping 91 percent of battery power instead of 88 percent as in the standard E-Tron. Audi hasn't revealed how the extra motor — and weight — affect range, but there will likely be a slight decline from the regular E-Tron's WLTP ratings, which span from 209 to 280 miles depending on model. Audi is working on battery upgrades that unlock more range, though, having already secured 15 more miles from the E-Tron's battery pack. Now all the automaker needs to do is secure a consistent battery supply.

There's a lot more fun to be had no matter how long the battery lasts, including plenty of drifting. The progressive steering gets a retune, the adaptive suspension's been firmed up and supplemented with firmer bushings and larger stabilizer bars front and rear, and wider 285-mm tires are fitted all around.

The front axle employs brake-based torque vectoring via six-pot calipers and larger discs, whereas the electric motors in the rear operate each wheel and control torque distribution without need for a differential. The motor controlling the outside wheel in a turn can throw 162 lb-ft more torque than is being given to the inside wheel; Audi says that after gear and final drive multiplication, the actual torque difference between the inside and outside rear wheels can reach 1,549 lb-ft. During off-throttle cornering, the inside motor can apply up to 0.3 G of regenerative braking force to create a similar effect. When it's time to slow the whole shebang, the regenerative braking system can recapture up to 270 kW in a regen-only stop from 62 mph.