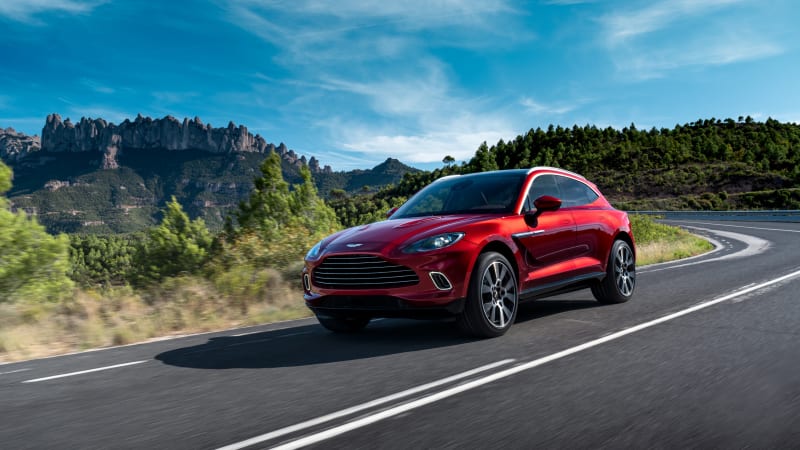 The 2021 Aston Martin DBX made its debut at the Los Angeles auto show with a Mercedes-Benz-sourced V8 engine under the hood. While that's the only engine that will be available at launch, the British company's chief executive confirmed there are several other options on the table.

Aston Martin CEO Andy Palmer told Road & Track the twin-turbocharged, 5.2-liter V12 found in models such as the DB11 AMR and the DBS Superleggera fits in the DBX's engine bay. On its own, that's not a guarantee that a V12-powered model will arrive; just because there's space to install a 12-cylinder engine doesn't mean it makes sense to drop it in. Palmer didn't confirm or deny that the DBX will gain four additional cylinders, but he stressed that Aston hasn't mined the DBX's full potential yet.

"We'll probably do other engine derivatives, we'll do other spec derivatives. As you do with any lifecycle management," he explained without going into more details about what's next.

The twin-turbocharged, 4.0-liter V8 delivers 542 horsepower and 516 pound-feet of torque when bolted between the DBX's fenders, which means there's already room for improvement. The same engine makes 603 horses in the GLS 63 and GLE 63 S that Mercedes-AMG unveiled in Los Angeles, and its output checks in at 630 horsepower when it's under the GT 63 S's long hood.

Swapping the V8 for a V12 would also bring the DBX's output above 600 horsepower — the DBS Superleggera's 5.2-liter packs a 715-horse punch — but it would put a Lagonda-sized dent in the vehicle's fuel economy. Aston Martin, like its peers, is under intense scrutiny in the emissions department. Time will tell which direction Palmer's team takes the model, but it's safe to bet we'll see a sportier variant.

"We're committed to doing an AMR in every one of our range, so that would be an obvious candidate," Palmer told Road & Track. When it arrives, there's a good chance it will face serious competition from the long-rumored Urus Performante that Lamborghini is allegedly working on.